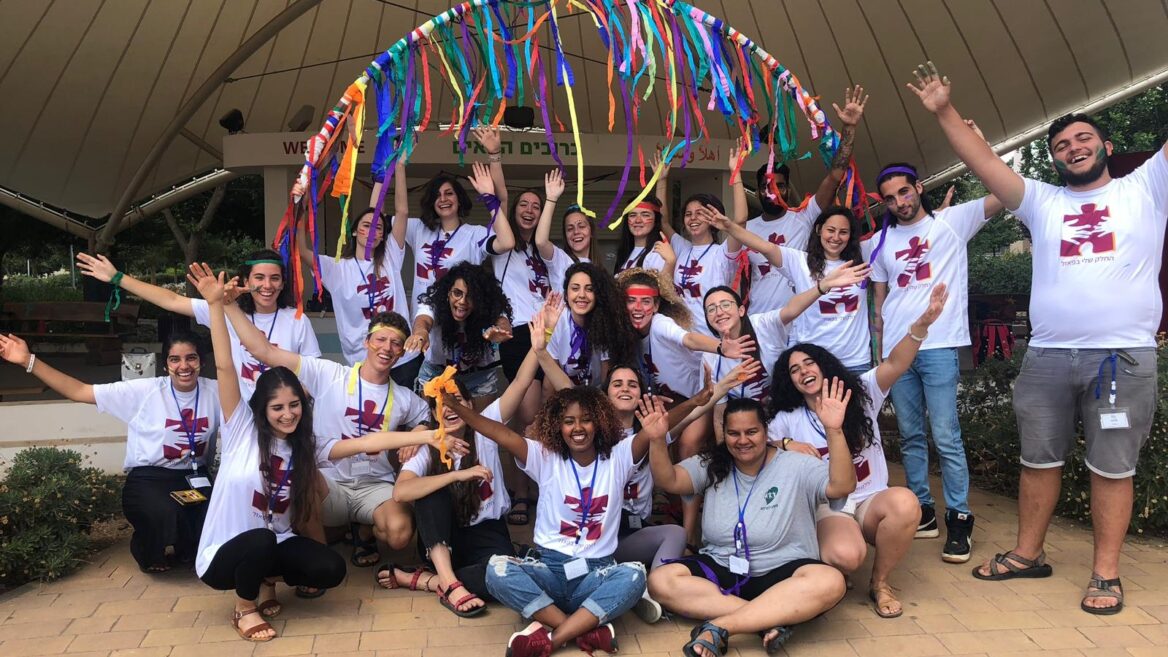 My Piece of the Puzzle, an Israeli summer camp integrating at-risk and special-needs teenagers. Photo: courtesy

Last summer, two at-risk teens – Or, 18, and Ben, 17 – came to a unique sleepaway camp run by My Piece of the Puzzle, an Israeli nonprofit that integrates youth at risk and youth with special needs.

From day one, these boys were aiming to get kicked out.

“They didn’t follow directions at all, did whatever they wanted and weren’t nice to me or any of the counselors,” cofounder Jenna Elbaz tells ISRAEL21c.

“They made fun of the rules, smoked cigarettes during activities, made fun of the other campers — both youth at risk and youth with special needs. They threatened that if they didn’t get their own room they would leave.”

On the second day their behavior only got worse, so they were asked to leave. “We don’t believe in giving up on anyone, but we felt like they weren’t keeping themselves and the other campers safe,” explains Elbaz.

Before Ben and Or finished packing, a shy low-functioning 14-year-old camper approached. “Tomorrow we have horseback riding. Can you help me get on the horse?” he asked them.

That changed everything. The boys begged Elbaz and cofounder Shaked Karp to give them another chance.

“For the rest of the week they were amazing. They helped us with other campers who misbehaved and became very close with that camper with special needs,” says Elbaz.

“On the last full day of camp, a friend of theirs was killed in a car accident. They were crying and we asked them if they would like to go home, but they said no. They chose to stay with all of their new friends till the end of camp.” 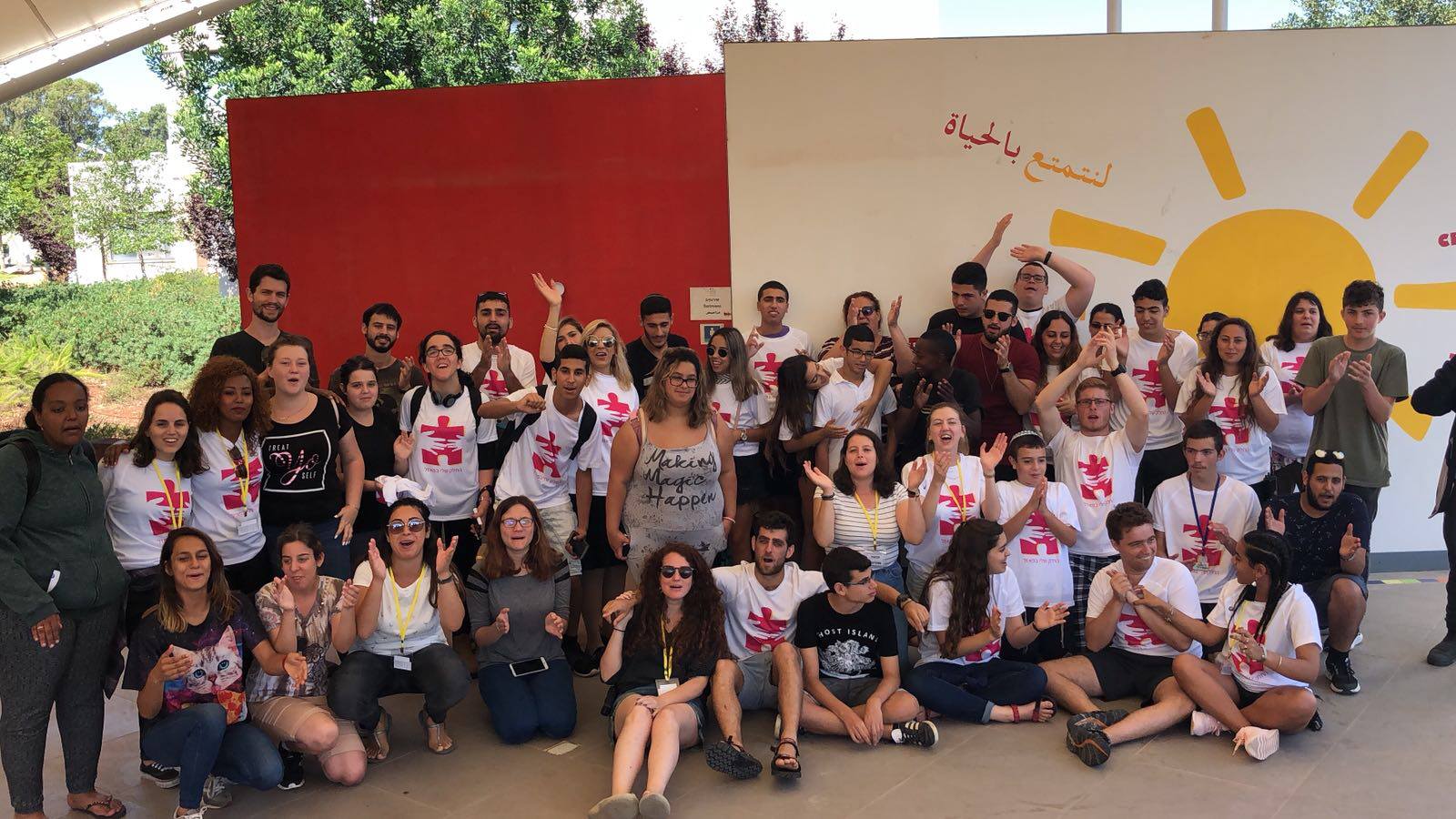 My Piece of the Puzzle camp in 2018. Shaked Karp is sitting in the middle (with sunglasses); Jenna Elbaz is second from right in second row, next to teen in green shirt. Photo via Facebook

In a classic example of young Israelis taking extraordinary leadership initiative, Elbaz and Karp started My Piece of the Puzzle in their mid-20s.

After finishing military service, they had gone to New York to work at a summer camp that accepts a hodgepodge of troubled kids and special-needs kids unsuited to other camps.

“We saw that if you pair at-risk kids with those with special needs, something magical happens,” Karp tells ISRAEL21c.

“This togetherness makes each population improve because kids with special needs usually stay together and don’t connect with others. And when kids at risk meet special-needs kids it opens their minds and makes them realize how much they can do for others.” 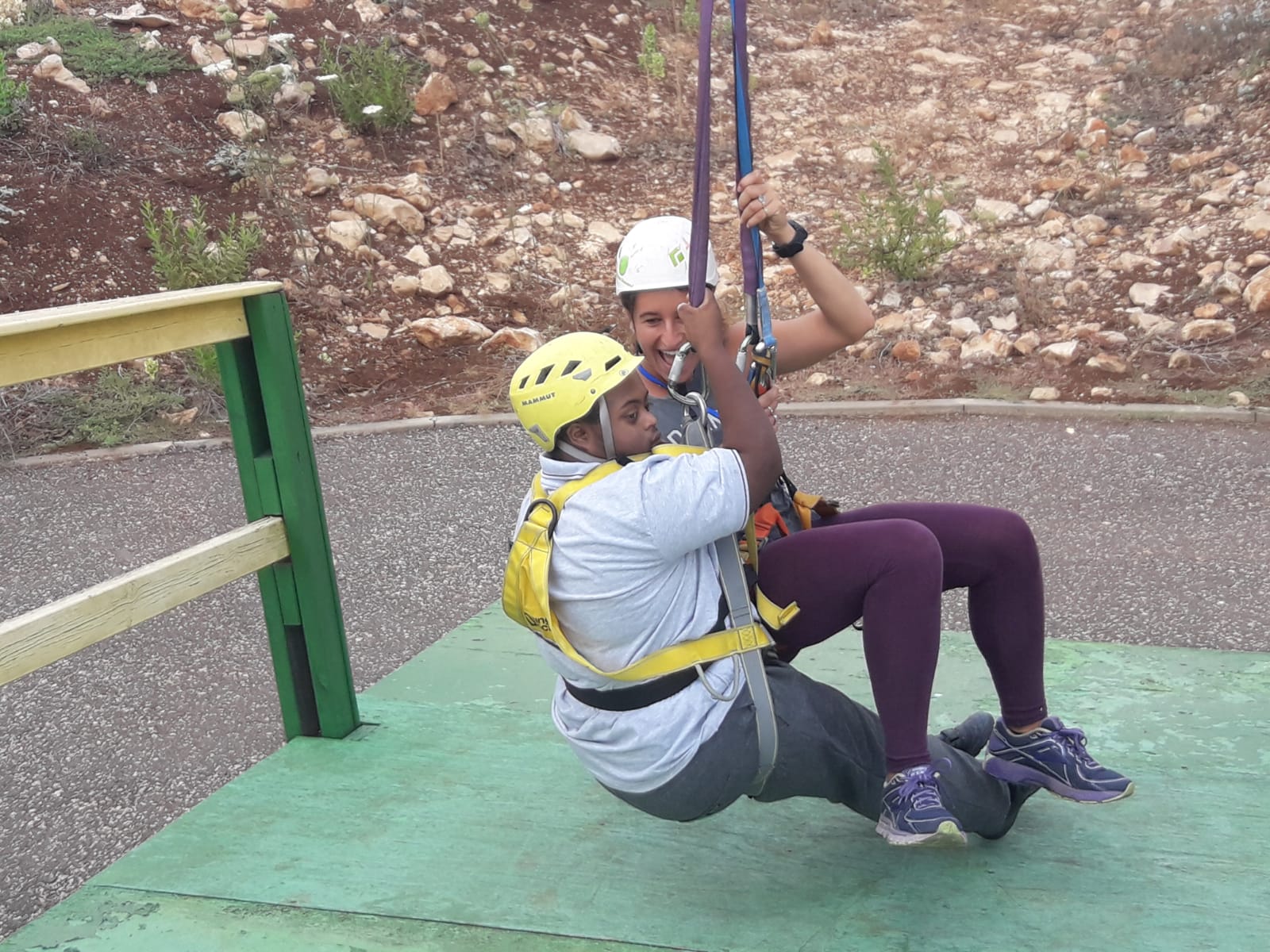 My Piece of the Puzzle counselor Talia accompanied camper Roni on the zipline as other campers cheered him on. Photo: courtesy

She and Elbaz got permission to bring a few at-risk Israeli teens to the camp the following four summers.

Wanting to benefit more teens, they innovated their own model of purposefully integrating the two groups at a free sleepaway camp in Israel for 14- to 18-year-olds. They decided to assign an even number of special-needs and at-risk campers to each bunk.

One of the first volunteer counselors was a young man they’d brought to New York several years before.

The upcoming fourth summer of My Piece of the Puzzle will offer two sessions.

“It will be bigger and better because we have support from the Goodman Foundation, which saw the results,” says Karp.

“It took us a long time to convince people that it’s possible and that the combination strengthens everyone.”

Getting kids out of the box

Elbaz and Karp introduced some unique elements to their program.

The main innovation is that My Piece of the Puzzle campers build relationships during the year so that they don’t come to camp as strangers.

This is accomplished by partnering with one at-risk and one special-needs school in cities from north to south — 14 schools last year and 28 this year.

Future campers meet regularly at the schools, which serve diverse populations; Karp says two Bedouin schools may be joining the program. Some of the teachers work as advisers in the summer camp.

Another unique aspect of My Piece of the Puzzle is community service. One summer, campers delivered handmade puppets and costumes to a kindergarten for kids with autism. Another summer they crafted magnets as gifts for hospital workers. 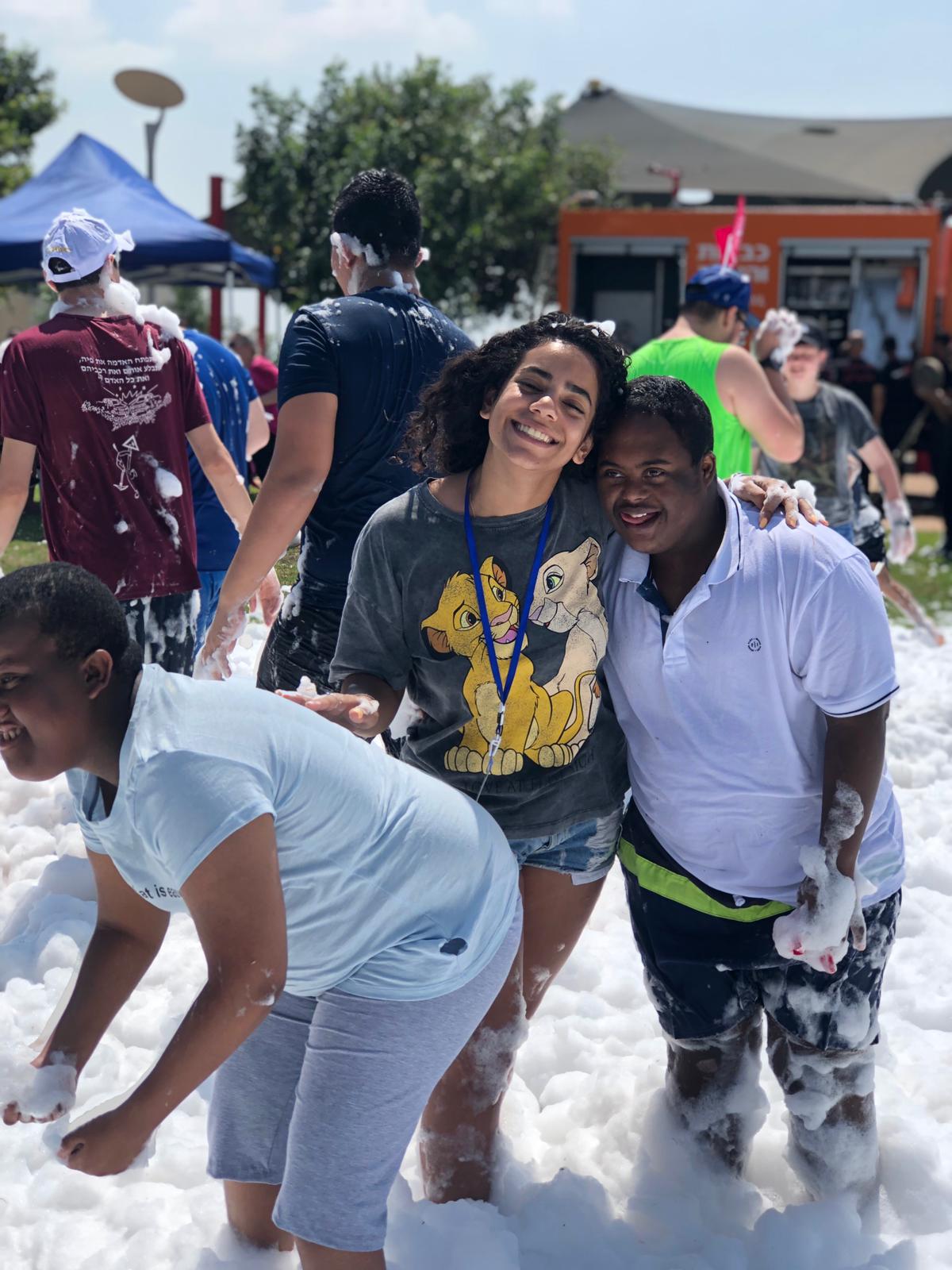 Counselor Tali Yechieli with My Piece of the Puzzle campers. Photo: courtesy

Supported by donations, My Piece of the Puzzle operates on the 60-acre Jordan River Village in northern Israel, which runs programs for children with disabilities or serious diseases. Elbaz, who has a degree in criminology and education, worked at Jordan River Village for two years.

Karp, now finishing law and psychology studies, says My Piece of the Puzzle will expand.

“We are spreading around our idea and vision because we see that it’s successful. Teachers in the schools we are working with see the benefits of helping these kids get out of the box. We really think this will benefit them and society.”

Nimrod, 14, came to My Piece of the Puzzle in the summer of 2017. Although he’s on the high-functioning end of the autistic spectrum, he didn’t interact with anyone – not even the three classmates he came to camp with.

“His mom and I spoke to each other every day because I really wasn’t sure he was having fun,” says Elbaz. “I didn’t see him smile or connect with any of his friends or anyone new.”

Nimrod’s mother wanted to pick him up a day before the end of the session to attend a family event, and Elbaz agreed. “I felt like he just wanted to go home,” she explains.

Surprisingly, Nimrod did not want to leave early. He was determined to perform at the talent show on the last night of camp.

“In My Piece of the Puzzle, we celebrate success and we set personal goals with every camper. We know that our campers have very low self-esteem and we believe in celebrating big and small successes such as following directions, making new friends, stepping out of their comfort zone, trying new things, kicking a ball, sharing their talent with their friends, helping each other and more,” says Elbaz.

“Nimrod was very distant at first, but because he didn’t give up and came to every activity instead of going home, he saw the amazing energy that the counselors have, he saw how other people stepped out of their comfort zone and most important of all, he felt like he was in a safe enough environment in order for him to get up on the stage and sing.”