Ever notice how a baby seems to catch your meaning without understanding the words you say? Or how your dog accurately assesses your state of mind from your tone of voice?

The founders of Israel’s Beyond Verbal noticed that too, and in 1995 they started researching how vocal oscillations – and not just body language — convey so much about the speaker.

A year ago, the company released its first product, an iOS app called Moodies, to help people gauge what the voices of their customers, job applicants, patients – and even themselves – reveal about their emotional status.

The app extracts, decodes and measures human emotions from raw voice in real time based on about 20 seconds of speech in any language.

Forbes listed Moodies as one of “5 Innovative Marketing Solutions That Can Help Your Business Grow“, and Examiner.com named it the best iPhone app of 2014. The app also made it into the Netexplo Top 100 for 2014 and is a finalist in the Gigaom Structure Launchpad competition to take place in mid-June.

Beyond Verbal was named a Gartner Cool Vendor for Human-Machine Interface for 2014 along with Israel’s MUV Interactive) and was selected as a finalist in Structure Launchpad, a sort of Olympics of cloud-based services.

Beyond Verbal has a YouTube channel on which you can watch analyses done on clips of prominent people ranging from Steve Jobs and Will Smith to the mother of the so-called Boston bomber.

Beyond Verbal’s Emotions Analytics engine picked up interesting results in this video of Steve Jobs discussing the development of the iPhone.

Beyond Verbal was launched in May 2013 with $3.8 million in angel investments. But the 20-person company, based in Tel Aviv, has deep roots. 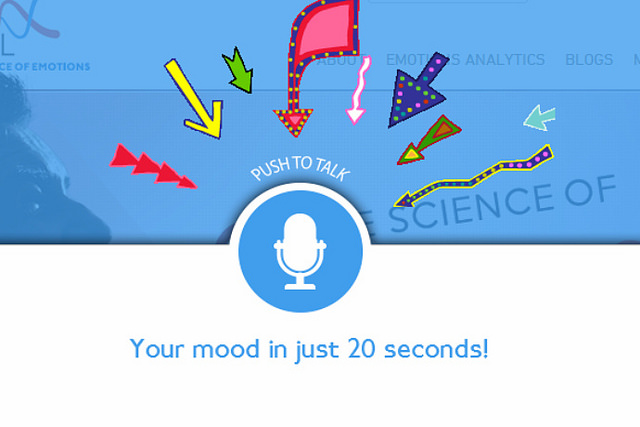 The partners built algorithms based on their findings and began applying for patents, five of which have been granted so far in the United States, says Dan Emodi, Beyond Verbal’s vice president for marketing.

As he spoke with ISRAEL21c, Emodi ran his own voice through Moodies to analyze how he was coming across emotionally. That’s one of the selling points of the award-winning app, as it can help anyone from salespeople to teachers alter the vibes they’re giving off as they speak.

“The basic story is that vocal modulations help us understand mood, attitude toward the subject and emotional decision-making characteristics,” says Emodi.

“With these three factors, we can understand the dimension of emotion in human communication, something machines are oblivious to. Our company’s goal is to endow machines with this capability to understand and interact better, and we’re at the forefront of this trend.”

Movies to match your mood

Beyond Verbal certainly isn’t alone in this space. For instance, Israel’s Nemesysco makes voice-analysis software for the security, corporate and financial markets.

The Moodies app, however, is the first of its kind, its makers claim. It provides a running screen of results and allows users to share the resulted mood analysis through email or via social media platforms such as Facebook and Twitter.

“Moodies has been great help for us, so people can see the technology and how it works,” says Emodi.

“Moodies offers everyone a chance to analyze their own emotions by simply clicking a button on their smartphone device,” said CEO Mor.

“We envision Moodies as a frontrunner to a new breed of emotionally aware apps and invite third-party developers to join in, license the technology for their own solutions and use our API and SDK to access our engine. As the industry continues to evolve, we believe it’s only a matter of time until we start seeing this sort of technology being integrated into a myriad of consumer and B2B product and service applications.”

How might the technology be used once it is offered through the cloud on a managed server? The possibilities are endless, says Emodi.

“This is great for call centers and market researchers. It goes way beyond that, though. We’ve gotten interest from verticals we didn’t even think about.

“Our technology will let machines understand us – a car might understand how I’m road raging and adjust accordingly. Developers could use it in gaming to change according to the player’s level of aggressiveness or engagement. Or what about an app that helps me choose what to watch or listen to in order to match my mood?”