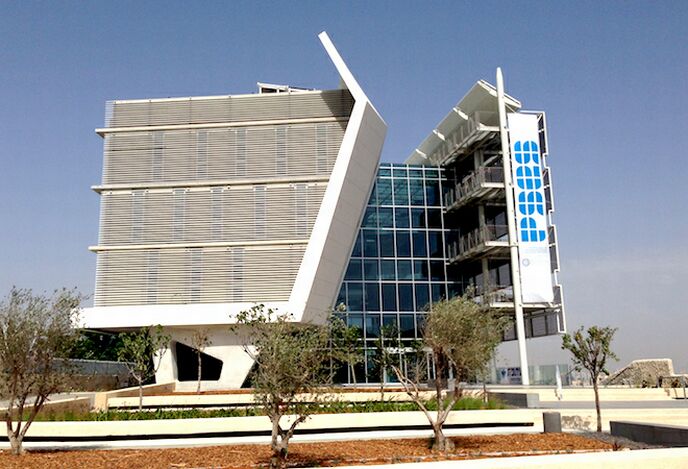 A strange-looking capsule made of curved bamboo strips (sustainably harvested, of course) pops out from a south-facing wall of sun-collecting tubes.

The intention of building such an odd accessory into Israel’s latest and foremost “green” building for the Porter School of Environment Studies at Tel Aviv University really was to scream “look at me” as thousands of Israelis make the daily commute into or across Tel Aviv.

Built atop the highest part of Tel Aviv on a precipice that hangs over the city’s main artery, the Ayalon Highway, the new edifice — Israel’s first LEED Platinum-certified building — sits outside the main belt of the campus beside the university’s unusual Urban Safari. While it was once a dumping ground, today this is prime real estate close to the train station. 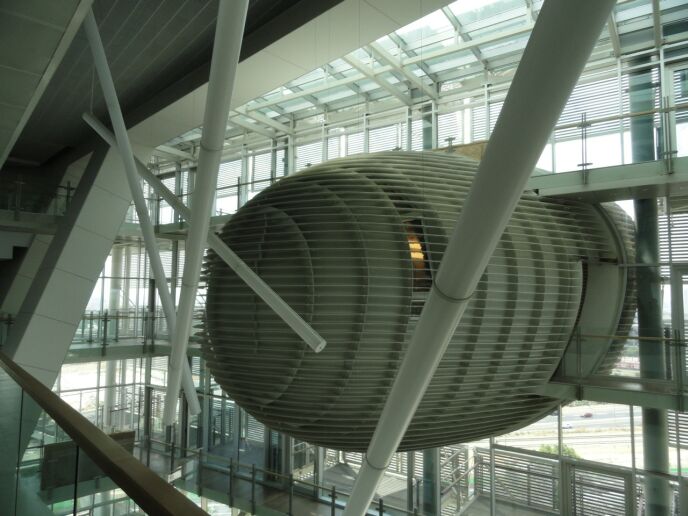 More than just a nose sticking out of the building. Photo by Karin Kloosterman

The Porter School was established about 15 years ago, and oversees an estimated 150 master’s students and 60 aspiring PhDs every year. Now it finally has a home fitting of an environment school that attracts overseas students and visitors. ISRAEL21c got a private tour before the building opens for the coming school year.

With no security perimeter, the Porter School welcomes guests with wetlands. A series of open gray-water collection pools recycles water from the building, turning it fresh with the help of water lilies.

Standing at a shaded entrance, Porter PhD student Hofit Itzhak Ben Shalom shows us the features that architects built in to ensure minimal energy will be consumed by the building and people using it.

“Notice no elevators?” she points out. “We have elevators, of course, but we’ve hidden them. We want people to think about taking the stairs automatically.”

There are about 300 sunny days per year in Israel. In the summer, the heat can be unbearable. Reducing the energy costs of cooling the building was a key factor in its construction.

It was designed by about 40 people from Axelrod-Grobman Architects; Chen Architects and Joseph Cory’s Geotectura Studio. 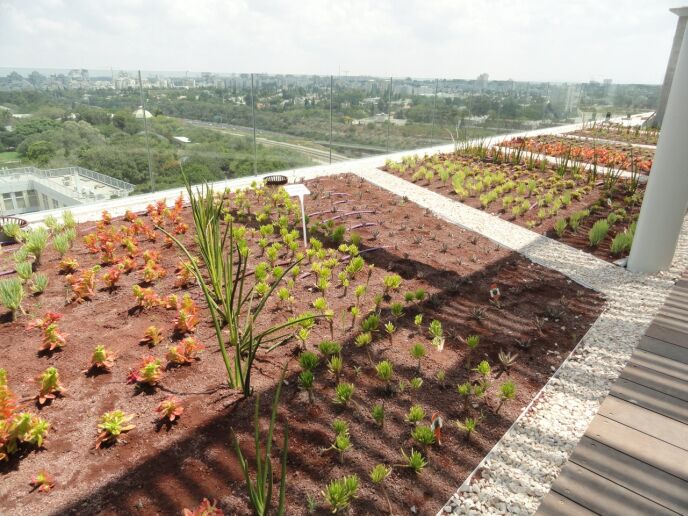 Plants on the building’s roof were carefully chosen. Photo by Karin Kloosterman

To deal with the intense heat of the sun, the building is in three layers to shield people working in its labs and offices. A series of enclosed patios are for public expo rooms. Solar tubes collect energy from the sun and simultaneously shade occupants from its rays. The tubes, in fact, generate about 30 percent of the energy used by the school. Water in the tubes gets heated, and up on the roof this heat drives turbines that create power.

On the wall with the solar tubes hangs an egg-shaped capsule where students and teachers can “float” new ideas. The capsule is more than a pretty nose on the face of the building. It is like an egg ready to give birth to new ideas.

The third segment of the building to the north has few windows opening to the south in order to conserve air-conditioning energy. The office windows face the north, and the rooms were built smartly so that movement and light sensors will automate air-conditioning and artificial lighting when needed.

A green home of dreams

Much thought went into the construction of the building, from sensors in the wetlands to choice of plants for the green roof to transferring waste energy to water piping in the floors to cool or heat the building, depending on the weather. Even the concrete is from a sustainable source, Itzhak Ben Shalom tells ISRAEL21c. 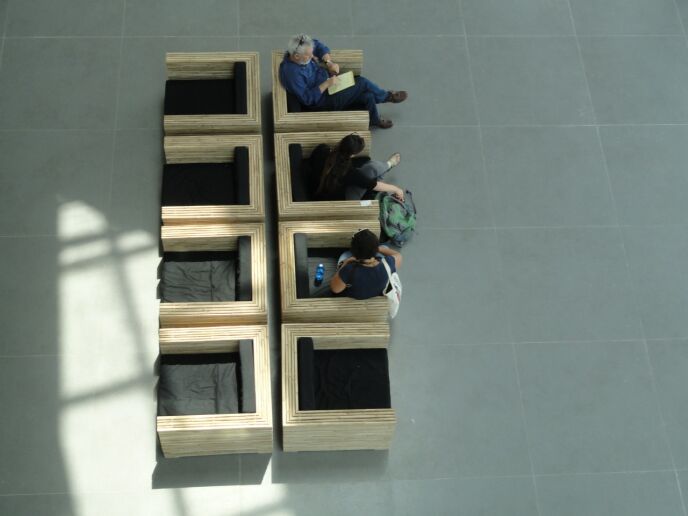 Natural light falls in the lobby. Photo by Karin Kloosterman

Prof. Dan Rabinovich, who heads the school, says that Porter’s students “belong to a generation that sees sustainability, the environment, social justice and our common future on this planet as one and the same.”

Their new building will be a testament to this. Look for it by day and lit up by night as you drive northward on the Ayalon Highway. Better still, pop in when it’s open to see what kind of new green research is cooking.