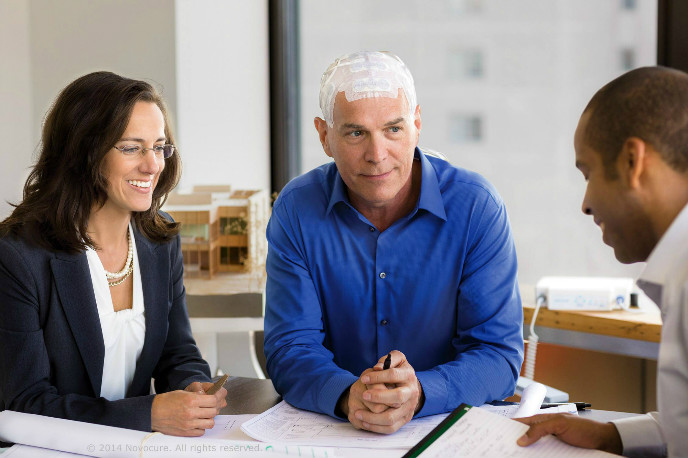 A novel wearable device, already used on nearly 2,000 patients to slow the growth of cancerous glioblastoma brain tumors using electrical fields, is now being tested to judge its effectiveness against other types of solid tumors.

Novocure Chief Science Officer Eilon Kirson tells ISRAEL21c that the 15-year-old company’s Tumor Treating Fields (TTFields) technology is being tested on ovarian and pancreatic cancer patients and patients with cancers that have spread to the brain.

At the same time, Novocure is involved in trials to see if TTFields can extend the life of even more patients with glioblastoma, the most common form of primary brain cancer in adults. Approximately 10,000 new cases are diagnosed in the United States each year.

“Electric field-based therapy had never been used to treat cancer beyond very local therapies,” Kirson explains. “Treating entire parts of the body this way is a completely novel concept and technology, and there is no other one like it. Novocure owns the entire IP portfolio for the science and the product.”

TTFields therapy, developed by Dr. Yoram Palti, now a retired Technion professor, is delivered via a non-invasive electrode device attached to the patient’s scalp. The low-intensity alternating electric fields have been clinically proven to slow and even reverse tumor growth by inhibiting the process of cells division and replication.

“If you think of standard cancer therapy – surgery, radiation and chemo – TTFields can be considered the fourth modality to be used independently or added to the other modalities to achieve better outcomes,” says Kirson. “As we move forward and do more clinical trials, we believe that it may be widely applicable in many types of cancer.”

Most of Novocure’s published data relates to TTFields’ effectiveness and safety in treating glioblastoma patients whose tumors have recurred after initial treatment.

Results of multicenter trials begun in 2006 proved the device just as effective as chemo in extending patients’ overall survival, but with lower toxicity and better quality of life.

In 2011, US Food and Drug Administration (FDA) approval enabled Novocure to launch its Optune delivery system for TTFields in patients with recurrent glioblastoma after chemotherapy. 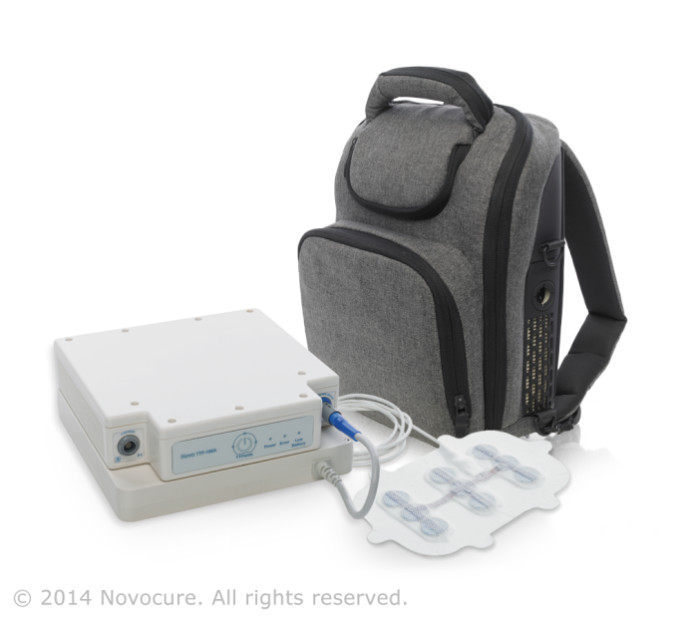 More than 150 neuro-oncology centers in the United States are now trained in the technology, which is available by prescription.

The company is now working with the FDA to obtain a new approval to treat newly diagnosed glioblastoma patients, together with standard chemo, based on the results of a phase III trial that began in 2009. In November last year, monitors recommended ending the trial early because it had already demonstrated TTFields’ efficacy. The monitors urged that patients in the control group be allowed immediate access to the treatment, and the FDA approved this crossover.

Last year, Novocure launched Optune in Europe — mainly in Germany, Switzerland and Austria — for treating recurrent and newly diagnosed glioblastoma. In addition, a regulatory application was filed in Japan.

Effective against other cancers

“Since we believe TTFields are applicable to a wide variety of solid tumors in the body, we are beginning to test them in other indications,” says Kirson.

Patient enrollment has just been completed in a phase II clinical trial of TTFields together with one chemotherapy drug in 20 patients with newly diagnosed advanced pancreatic cancer. Another 20 will be enrolled in a cohort to be treated with TTFields and two chemo drugs for pancreatic cancer, the fourth-leading cause of cancer-related death in the United States and Europe.

“We are proud to take part in a clinical trial testing a novel approach for the treatment of pancreatic cancer,” said Dr. Fernando Rivera, senior medical oncologist at the Santander University Hospital in Spain, who has treated five patients so far.

“This regional, non-invasive treatment that acts on dividing cancer cells has the potential to make a real change in the treatment paradigm for many of the 340,000 patients diagnosed with pancreatic cancer worldwide every year, mostly at an advanced, non-curable stage,” said Rivera.

Novocure plans a phase III clinical trial this year to test the ability of its technology to prevent a recurrence in patients who underwent stereotactic radio-surgery after non-small-cell lung cancer spread to the brain.

In a recently published pilot study, 42 non-small-cell lung cancer patients in Switzerland were treated with TTFields from 2008 to 2010 in combination with standard chemotherapy.

“We are also doing smaller-scale studies in mesothelioma, an aggressive cancer in the chest,” Kirson says, “as well as a trial in recurrent ovarian cancer in several European centers, where we will treat patients together with the standard chemo regimen.”

The multinational company has more than 200 employees in six countries, about 40 of whom work in Novocure’s Haifa research-and-development center.