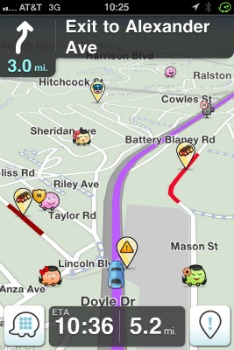 Waze helps you navigate in real time with its own maps.

It was dubbed “Carmegeddon,” for the cataclysmic driving meltdown that was sure to result from the closure of the largest highway in Los Angeles for a weekend last July. Local television stations were looking for an angle that would keep viewers glued to their channel.

Israeli startup Waze came to the rescue with its mobile app that can determine where the traffic is flowing or slowing, based on user-generated data from the GPS on their smartphones. If the GPS tracking stands still, Waze assumes the car is too.

Waze teamed up with the local ABC affiliate in Los Angeles, resulting in more viewers for Channel 7, and tens of thousands of new downloads for Waze. ABC is now rolling out the same partnership in cities including Dallas.

Waze’s splash in Los Angeles is the icing on a cake of successes, as the three-year-old company reaches critical mass in market after market, from Latin America to Asia. And nowhere is the impact larger than in tiny Israel.

“We need three percent of all drivers in an area in order to get to critical mass,” explains Uri Levine, co-founder and president of Waze. “If you think of France with its 30 million vehicles, that’s 900,000 drivers using Waze. In Los Angeles, with 15 million vehicles, we’d need half a million users.” 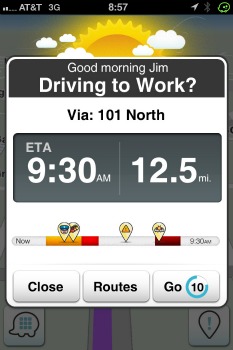 Israel’s 1.5 million users constitute 20 percent of all drivers in the country. “We started here first, in 2009, a year before the rest of the world,” Levine says.

Turn it on and drive

The driver doesn’t have to do anything except turn the app on. When there’s a slowdown, an icon appears on the Waze map displayed on the phone. The more icons, the heavier the traffic.

Users can report what they’re encountering on the road in real time manually, with a tap on the touch screen. There are different icons for reported accidents and for sightings of police and traffic cameras.

As your vehicle travels, a line on a map positioned by GPS appears. If you run into a T-junction and turn left, that appears. If another driver turns right at the same intersection but no one drives straight, the software understands how to create the map at that stop. The same with traffic circles and lights (Waze can gauge how long cars are standing still).

“If we know that a highway will be shut for a period of time, we can provide that information on the map. The route won’t even appear on the map if it’s going to be closed,” Levine explains.

When your car is not moving, you can chat with other drivers you see on your Waze map, and the company is working on a way to save these connections so you can chat from work or home. Levine calls it a “matchmaking” system for arranging carpools.

“You might find out that the person you see driving the same way every day works in the floor above you, but you would never have known that otherwise,” he points out.

Waze is also making an aggressive push into the Asian market. The company just raised $30 million in a round led by Horizon, a venture capital firm based in Hong Kong, with additional funding from Kleiner Perkins.

Asia presents unique technological challenges. “In Japan, the house numbers aren’t in order as they are in most Western countries, with odd numbers on one side of the street and even numbers on the other,” Levine explains. 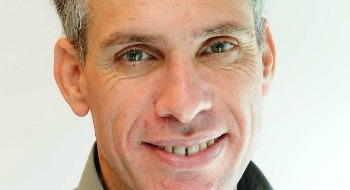 China is even trickier. “First you need a license to work in China, and you can only get one if you are a Chinese company,” Levine says. The other obstacle is that all communications in China are monitored by the government.

But the Chinese market has enormous potential. China has the highest uptake of smartphone usage, the greatest number of new cars per capita and major new infrastructure projects.

It was a desire to map all the traffic cams in Israel that led founder Ehud Shabtai to start an amateur project called FreeMap, in 2006. Two years later, he got together with entrepreneurs Uri Levine and Amir Shinar to found Waze (originally called Linqmap), bolstered with $12 million venture capital investments.

As of November, Waze had seven million users worldwide and was expanding by about a million new users per month. And it doesn’t need any deals in place to start working.

“If you’re the first person with Waze to drive in Antarctica, Waze will create that map,” Levine says.

Could Waze help drivers navigate in foreign countries? While the instructions can be customized (“turn left” will be in whatever language you’ve set it to), the street names will be displayed in the local language.

Waze has 70 people working in Israel – more than half in R&D – and another 10 in its Palo Alto, California offices headed by CEO Noam Bardin.

“In more and more places we’re reaching critical mass,” Levine says. “And if you have a positive experience, you want to tell your friends.”