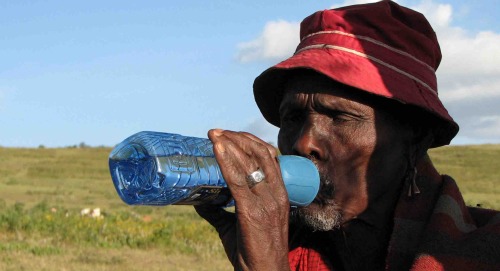 Following a major earthquake in Taiwan in 2009, humanitarian aid workers from Israel brought along locally made WaterSheer products to ensure a steady stream of potable water for the survivors and to transport drinking water quickly to where it was needed most.

“You need high quality water in every circumstance, and we are able to provide it even in cases of disaster,” says Yossie Sandak, CEO and co-founder of the three-year-old company based in Airport City, near Tel Aviv. “In Taiwan, within 48 hours our products were already in the field and purifying 16,000 liters (4,227 gallons) per day.”

Using a chlorine tablet to treat organic, biological and chemical contaminants, Sulis delivers safe drinking water from almost any groundwater source. One unit can purify up to 700 liters (185 gallons) with a shelf life of about six months. This makes it suitable for emergency preparedness response, military operations, global travel and other commercial uses.

The Sokol1 multi-liter reusable purification system and the Sokol Alert were designed to treat large quantities of undrinkable water. The aseptic “water pillow” system provides a solution for supply and mobilization. Each pillow holds up to 3,100 gallons of potable water and can be loaded onto flatbed trucks. When they arrive at distribution points, the units are emptied into smaller flexible thermoplastic “pillows” that can have taps attached for easy and immediate distribution. 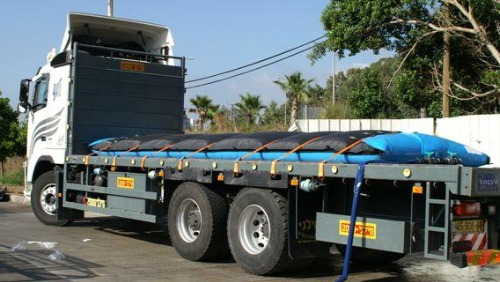 The Sokol water pillow holds up to 3,100 gallons of potable water and can be loaded onto flatbed trucks.

WaterSheer also came to the rescue in Myanmar after the 2008 cyclone and Haiti after the earthquake earlier this year. Now the company is preparing for its role in coordinated contingency plans in case of terrorist attack or natural calamity during the 2016 Olympic Games in Brazil.

Disasters aside, WaterSheer is focused on a much larger issue: Only 0.74 percent of the world’s water is considered safe for drinking, and some two billion people either lack access to sufficient quantities of water or are supplied with unsafe water.

It is estimated that about 1.6 million children under the age of five die from drinking untreated water in developing nations. Temporary shortages of drinking water or difficulties in moving or distributing water to civilian, emergency or military populations are also everyday occurrences.

Knowing these grim statistics, Sandak left his previous business in commercial infrastructure development and dove into new waters when inventor Ron Shani showed him his water purification ideas in 2005. Together they perfected the design, conducted market research, and launched WaterSheer two years later with the addition of director Ilan Maor.

Sandak, a former Israel Air Force officer, has positioned WaterSheer in several sectors, including homeland security. The organizers of the first Israel Homeland Security International Conference in Tel Aviv this fall invited WaterSheer to give a presentation. It was the only company of its kind singled out to participate.

“We offer full strategy and concept from training to deployment,” Sandak tells ISRAEL21c. The products are designed to be inexpensive, readily available in mass quantities, small and lightweight, appropriate for both children and adults, maintenance-free, and not dependent on professional teams or electrical power.

Still under development is a personal water backpack filtration unit and Sandax MS, a multi-source emergency personal water purification system. WaterSheer intends to position this latter product for use in extreme situations of war, disaster and remote travel, as it will be capable of transforming even sea water and urine into safe, drinkable water.

Up to 20 percent of the equipment sent to disaster areas was donated, Sandak notes. Sales have been made in Israel as well as in Africa, Latin America and Taiwan. Markets in India and other major countries are currently under evaluation. “When there’s a disaster, the main problem is how to bring water to the population as fast as possible and that’s what we know how to do,” Sandak concludes.