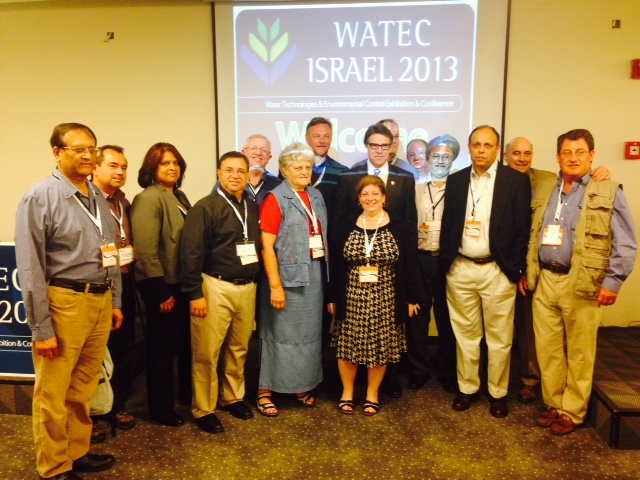 A few years ago there were just dreams, mostly unfulfilled. Now, Israeli entrepreneurs eager to transfer lifelong careers in engineering and high-tech to the more noble business of water are seeing the fruits of their labor.

A large pavilion at Israel’s annual Water Technology and Environment Control Exhibition and Conference (WATEC) displayed startup technologies from the simplest ideas to those that connect IT to the traditional world of water.

Visitors came from countries around the world to see these innovations. Some, like participants in Project Interchange-AJC, were on a mission to learn more about Israeli solutions needed back home.

Mark Ellison, a water development consultant in Texas, says the large state is facing challenging water demands due to rapid economic and population growth. “Like Israel, we are water-challenged and need to solve problems.”

He came to WATEC with Texan industry experts to look at approaches in the area of desalination for the Gulf of Mexico and to tap into ways of cleaning brackish water, an Israeli expertise. And while water reuse stands at 85 percent in Israel, “we are only at 5%,” Ellison tells ISRAEL21c. Texas Governor Rick Perry spoke at the conference.

WATEC attracts participants from all over the world.

Brian Mergelas from WaterTap in Toronto was part of a delegation from Ontario, seeking to make partnerships between Israeli and Canadian companies.

Some of the most solid Israeli water-tech companies have taken years, even decades, to perfect and help strengthen Israel’s economy. For many WATEC attendees, meeting reps from companies like drip irrigation pioneer Netafim for the first time is as exciting as it is for a teenager to meet Rihanna.

Also on hand were Israel’s national water carrier Mekorot; Bermad, a pipe-and-valves company; and newer players in the smart water market such as TaKaDu and Blue I, which has a sweet deal with Coca-Cola.

New kids on the block

“It was great getting media attention about our company several years ago,” says Michal Chesla, a sales and marketing rep for Tal Ya, maker of plastic trays that fit around tree trunks and seedlings, helping growers save time, money, water and fertilizer.

“But in a way it was too soon. People contacted us ready to buy, and we had to disappoint them because the product wasn’t ready. Only now we are ready to start sales,” she tells ISRAEL21c. The low-tech product is being patented in 69 countries.

Also looking to make a splash was CuraPipe Systems, which wowed guests with its proprietary “smart glue” for sealing leaks inside old pipes. Co-CEO Peter Paz says the product has effectively invented a new market in the water business by offering a safe, strong, non-toxic alternative to ripping up old pipes.

Applied CleanTech was a star of the new smart-tech pavilion hosted by Israel’s New Tech, a government agency to support new water and energy savings devices. The company, says sales manager Bezalel Jacobowitz, turns treated human waste and toilet paper into non-toxic pellets called Recyllose, which can be used to make paper or even act as bioreactors. Applied CleanTech is shipping this technology abroad, and is turning sewage into a useful commodity in Israeli cities such as Safed (Tzfat).

A company called Aquanos has seemingly put together concepts from a couple of Israeli water companies. Its system filters wastewater using algae to ingest the sewage, and aeration beads, an idea used globally by the Israeli company Aqwise. CEO Udi Leshem says Aquanos uses 90 percent less energy than current aeration systems, and the algae is a valuable byproduct as feedstock for fish or biofuel.

ISRAEL21c found GreenIQ’s Odi Dahan mixing and mingling with potential partners and investors on the floor. The former chief architect of Motorola in Israel, Dahan designed a device that aligns with online data to control sprinklers and garden lighting in accordance with the time of day and the weather. He got the idea earlier this year when he saw his sprinkler system kick on during a rainstorm. GreenIQ (greeniq-systems.com) is selling its product for $200 a unit.

Another company, LeakStop, makes a smartphone-connected box to spot and alert to leaks in the home or hotel, and it even modulates water pressure. Business development VP Gil Senesh says that whenever the taps aren’t on, excess pressure can harm the pipes, eventually leading to leaks and disastrous pipe bursts.

LeakStop, like so many other companies on display at the international annual event, hopes to save the day, using water technologies and a little Israeli ingenuity.

UNCOVER ISRAEL - Get the ISRAEL21c
Weekly Edition free by email
Sign Up Now!
Bring Israel's story to life.
Millions of people around the world rely on us to gain a deeper understanding of Israel. We are the trusted source for original content you won't find anywhere else.
You can make a difference. Donate today to support journalism that brings Israel’s story alive.
SUPPORT ISRAEL21c
Read more on:   Watec, Environment, water, Green Science, Eco-Living, Cleantech, agri-tech, Water-tech