Fabled Portuguese explorer Vasco Da Gama set out in 1497 to open a new route to India. He traveled up and down the coast of Africa before finally finding his way eastward.

More than 500 years later, Israeli startup VascoDe has made its way down the African coast, too. But the high-tech VascoDe is not searching for cinnamon and pepper to bring back to Europe; rather it has come to sell stripped-down cell-phone software to the emerging markets it is “conquering” along the way.

Putting aside geography for a moment, VascoDe’s business model might at first seem counterintuitive: The company has essentially built a method for simple phones – the basic Nokias and HTCs that dominate the developing world – to run smartphone apps like Facebook, Gmail, Twitter and Skype. Who would invest in a company looking backward rather than toward the next generation of iPhones and Android devices?

Backward is all a matter of perspective. An estimated 4 billion people in places like South Africa, Sri Lanka, Brazil and Indonesia already own one of these simpler phones. A billion such phones were sold in the last year alone. Now the business model is looking a lot more lucrative.

‘It can literally change someone’s life’

VascoDe CEO Dorron Mottes says that some 83 percent of all phones out there are “simple” phones.

“The real question is how to upgrade their capabilities. For example, someone might have an interest in being on the Web but can’t afford a smartphone and certainly can’t afford the data costs.”

In Soweto, South Africa – a market VascoDe is actively courting – users wanting to go online, even for something as simple as checking email, are forced to visit an Internet café and pay about $1 per hour for access, Mottes says.

More critically, not having regular Internet access can put a jobseeker at a serious disadvantage when applying for and responding to fast-moving job openings.

VascoDe’s software gives that simple phone-owner in Soweto the same connection to email at just 10 to 50 cents per week.

The entirely cloud-based system – it requires no downloads onto the user’s phone – uses the text-based USSD, which is akin to SMS. The user sees only black-and-white characters with no pictures at all. But it works, and it levels the employment-seeking playing field. “It can literally change someone’s life,” Mottes says. 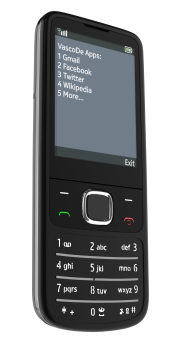 VascoDe lets you access Web apps with a simple phone.

USSD is part of the global mobile standard that works on 2G systems and up. IT is in real time, so when you send a request to VascoDe’s servers, the answer comes back immediately.

VascoDe uses the published APIs (application programming interfaces) from Facebook, Gmail and the like to create its simple phone solutions. Mobile operators offer it directly to customers (the name “VascoDe” is not a known brand).

You have to sign up via computer, but from then on, all you need is mobile.

A million subscribers and a multi-ethnic staff

VascoDe launched in 2009 and is closing in on its first millionth subscriber. While Mottes will only reveal the company’s South African customers, he says deals with another six or seven operators are in various stages.

Mottes travels to any countries in which his company is doing business. It’s important to get a feel for the local culture and how people are really using their phones, he says.

But he doesn’t have to travel far for his own multicultural experience. VascoDe, the company, employs immigrants from Canada, Ethiopia and Russia, alongside ultra-Orthodox Israeli women and Arabs.

“To be innovative, you can’t have people that are all the same,” Mottes says. VascoDe’s 20 staff members work from an office near the Ramat Gan Diamond Exchange.

And what if cell-phone users suddenly start upgrading to smartphones en masse? Wouldn’t that put VascoDe out of business?

“If it happens suddenly in 2013,” says Mottes, “that would be bad.” Nor is it likely. Most phones in the emerging world, he points out, cost around $10. So iPhone saturation is quite a long way out.

But within five years, VascoDe should have a large enough installed base that it can then start selling more advanced services if and when users move up.

Which gives this Israeli explorer time to batten down the hatches and turn cell phones into spices.