Fighter pilots and team-sports players have more in common than a uniform, a taste for danger and a thirst for victory. Both can be trained to perform better by using brain-training software developed in Israel.

Basketball and hockey players, from professionals to pee-wees, are getting significant results from IntelliGym products made by Applied Cognitive Engineering (ACE), headquartered in Hod Hasharon.

Just recently, the US men’s national under-18 hockey team — the first adopter of the Hockey IntelliGym three years ago — defeated Sweden 7-0 to win an unprecedented fourth consecutive world championship. And out of 30 National Hockey League draft picks in 2011, 16 had trained with IntelliGym.

It all started with military applications devised by cognitive psychology and engineering expert Daniel Gopher, a professor at the Technion-Israel Institute of Technology. When his video-game-like training methods were used in the 1980s and 1990s by the Israeli Air Force and the US Army Aviation Center, pilot performance in the air improved by 30 percent.

How did ACE go from the airfield to the playing field?

“We found a lot of similarities between jet flying and competitive sports,” says CEO Danny Dankner. “We realized we had the technology to improve performance of people in information-condensed environments with a lot of data coming in, and where fast decisions need to be made under duress.” 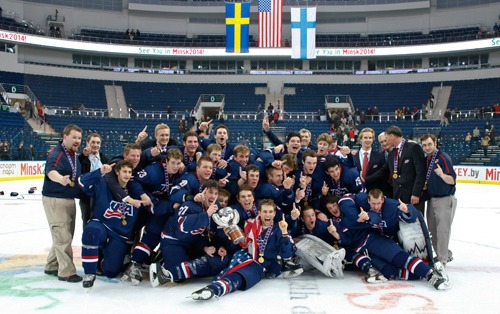 IntelliGym-trained US Hockey under-18 team celebrating its world championship.

Following extensive research and development led by Gopher and two of his former students, ACE introduced the Basketball IntelliGym in 2006. NCAA (National Collegiate Athletic Association) Division 1 teams snapped it up, and Hall-of-Famer and former NBA coach Hubie Brown was so impressed that he joined ACE’s advisory board.

“In the game of basketball it is not about who runs faster or jumps higher, but about who makes better decisions and fewer mistakes,” Brown said in a testimonial. “This is the first time I see a training tool that can actually improve game intelligence skills of basketball players. The Basketball IntelliGym is revolutionary.”

IntelliGym looks and feels like a video game, but it’s a lot more sophisticated. Each session starts by presenting a plan for the 30-minute cognitive workout to help athletes “think” the game. Among the target skills are game awareness, reading and reacting to constantly changing situations, peripheral vision and the ability to anticipate a play before it develops. The program adjusts the skill level to individual players, and generates analyses and reports.

“In order to develop a basketball cognitive training tool, our researchers mapped the brain skills that are required for top performance in the game of basketball,” according to company literature.

“These include (among others) reading plays, positioning, decision making, team work, and execution under pressure. Together, they constitute what is usually referred to as game intelligence. With this map in hand, the researchers designed a system that simulates the exact same skill set.

“Although the players are merely performing with a keyboard in front of a monitor, if you screen the trainees’ minds during this brain workout, you’ll find that the skills (or the ‘brain muscles’) that are working are exactly those that are required during a real basketball game.”

Encouraged by the results of its first product for basketball teams, ACE followed with a consumer basketball version and then rolled out Hockey IntelliGym, whose results were presented at the 2012 International Ice Hockey Federation (IIHF) International Youth Coaching Symposium in May.

There’s no reason to limit the downloadable game to basketball and hockey, Dankner tells ISRAEL21c.

“We are now negotiating with potential partners in the US, Europe and South America to enter the two major sports of soccer and American football,” he says. “Both are very interesting for us, because we believe we could contribute substantially to performance.”

The program, available through monthly subscription or with a license purchase, also appears to protect trainees against sports injuries.

“Many of the injuries in hockey, like in football, are caused by unanticipated hits, and when players are trained to be more aware of their surroundings they can avoid those hits,” Dankner explains. “We’ve been training national teams, and their medical records show a drop of nearly 25% in injuries, particularly concussions, for those teams that have gone through our training program.”

ACE is even looking beyond sports altogether. “Another direction we’re looking into is a solution for children diagnosed with attention deficit issues,” says Dankner. “We have good evidence that cognitive training can help, and we want to develop a training environment for them.”

ACE manages its US sales out of an office in New Jersey.