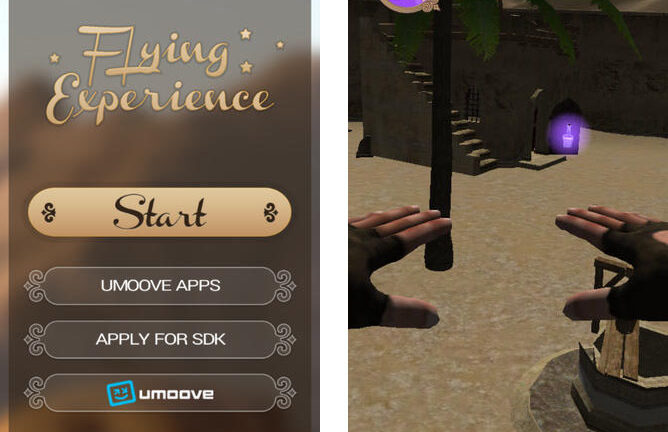 Screenshots of the Umoove Experience for iPhones and iPads.

Go into the App Store before you read the next sentence of this news brief and start downloading Umoove Experience.

Now that you’ve done that, here’s what you need to know about the most amazing, cool new mobile gaming technology: Umoove Experience lets you play a game on any iOS device by simply tilting your head.

The app is powered by Umoove’s face and eye-tracking technology and gives users a platform to control and navigate their virtual surroundings using their head.
The goal of the game is simple: Pick up magic potion bottles in a desert surrounding. It takes a few tries to succeed in tilting your head this way, then that way at the right speed.

The game itself might now be fascinatingly deep, but Umoove promises this is just the beginning. This is the first time that such technology is available on iOS devices.

“The main focus behind the launch is to introduce face and eye interaction to the public and to wet their pallets for what is to come,” said Tuvia Elbaum, Umoove co-founder and CMO.

Founded in 2010, Umoove developed a technology that tracks face and eye movements on any mobile device despite dynamic and unstable mobile environments. Umoove requires no additional hardware add-on and functions at a low CPU of less than five percent on contemporary devices. The company has filed for 15 patents.
In the coming months, the company says it will be releasing more face and eye interaction technology across various verticals in the fields of advertising, gaming, medical, security and more.
The key objective is to enhance the mobile user experience by adding a new layer of interaction on top of touch.

“You can take an existing application and, suddenly, it becomes a whole new world where you feel that you are a part of the experience” said Yitzi Kempinski, co-founder and CEO.
Umoove has also announced that the complete version of its SDK is now officially available to the public.