Ordinary Israeli citizens such as Azaria Klein, 19, and Shani Babkoff, 22, have something cool in common with Israeli President Shimon Peres and veteran news anchorwoman Miki Haimovitz: They acquired self-confidence, leadership skills and national pride from an early age as members of Tzofim, the Israel Scouts.

Tzofim learn how to tie knots, orienteer, build a campfire and perform community service just like Scouts do in other countries. But this 94-year-old coed, multiethnic youth movement focuses on fostering future societal leaders from the bottom up, putting many responsibilities in the hands of the young people themselves.

“What attracted me most was that the counselors were great, charismatic people and all of us little kids wanted to be like them,” Babkoff tells ISRAEL21c.

She became a counselor at age 16 and joins some 400 Tzofim “graduates” who came back to direct Tzofim programs and activities. She organizes trips, trains counselors and works with Scouts and parents in Rehovot. Babkoff hopes to earn a teaching degree so she can make a career out of working with teenagers.

Both Klein and Babkoff began wearing the khaki Tzofim uniform twice a week, along with most of their classmates, in fourth grade.

“The main goal of Tzofim in the early years is to teach morals that you learn though games and activities, such as being a good person and helping your friends,” Klein tells ISRAEL21c. “As it progresses, it becomes more about being involved in the community and the culture, and knowing about what’s going on in the world.”

When he was in 10th grade, he was chosen to be a counselor for seventh- and eighth-graders, devising fun ways to impart ethical lessons. “We would give the kids thinking games and puzzling dilemmas to work out. A lot of effort goes into these activities – it’s not just kicking around a soccer ball.”

A bridge joining Israel and the diaspora 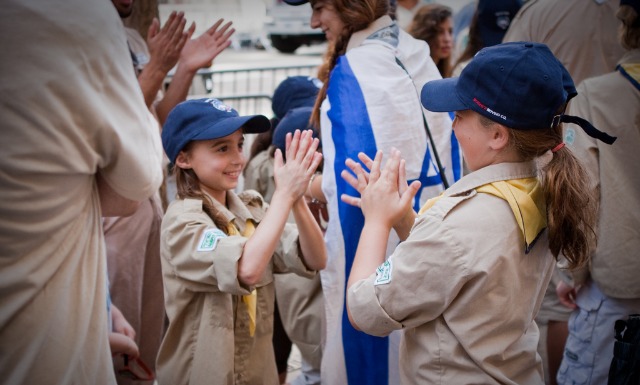 These Tzofim Tzabar members were among more than 300 Israel Scouts marching in the June 2013 Celebrate Israel Parade in New York.

However, Tzofim’s reach goes farther. Tzofim Tzabar, run by Friends of Israel Scouts, serves some 2,000 Hebrew-speaking children in grades three to 12. Activities in these 19 tribes — 18 in the United States and one in Canada — mirror those offered in Israel.

“The goal of all our programs is to strengthen the connection between North American Jews and Israel,” spokesperson Aliza Beilin tells ISRAEL21c. “A lot of our programs are geared to Israelis living in America.”

Over the past 22 years, hundreds of young North American residents of Israeli origin have chosen to return to Israel through Tzofim Garin Tzabar, a voluntary educational program that eases the transition back into Israeli society and into the military. In 2013, about 350 young men and women opted to join.

There is a gap-year program for Israeli-American high school graduates wanting to be National Service volunteers in Israel; and Chetz v’Keshet, a teen summer camp combining touring and immersive activities such as Gadna military training. During the summer of 2013, Chetz V’Keshet attracted 103 teens, 30 of them Israeli citizens.

The international ties flow in the opposite direction, too. Every year, more than 250 Israel Scouts travel abroad to guide or participate in activities and leadership programs with Jewish peers in the diaspora. 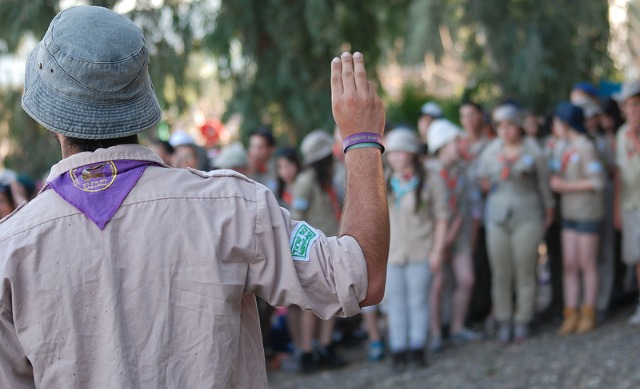 Tzofim Friendship Caravan, an entertainment troupe, has grown to include four groups of 10 Scouts and two counselors each. They bring Israeli cultural activities to American Jewish summer camps, and stage Israeli musical shows in Jewish communities across 41 states and two Canadian territories.

Tzofim leaves no Israeli behind

The Tzofim organization has received nearly a dozen national prizes, including the Prime Minister’s Award for its programs for youth with special needs. Tzofim Tzamid tribes across Israel serve about 1,000 physically and developmentally challenged Scouts. However, this is not the only marginalized population the movement embraces.

About 10 percent of all Israeli youth of Ethiopian origin — 1,500 children and teenagers — are members of Tzofim. Tribes have been formed also for teens at risk, or for teens in jail or foster care.

“The Tzofim Movement wants to expand its reach to Israel’s teens wherever they are — in poor, inner-city neighborhoods, juvenile facilities and special-needs schools — and to provide them with the opportunity for real change, to flourish in a positive social environment, to gain important leadership skills and to become responsible contributing adults,” says Katz.

Statistics on high school graduation and completion of pre-college matriculation exams shows that membership in Tzofim seems to bump up all the numbers dramatically, even in depressed municipalities where the average matriculation rate is little more than half. In the military, former Tzofim tend to try out for the most respected positions, such as pilot training.

Over the past few years, hundreds of Tzofim have deferred army service to take advantage of a new one-year volunteer opportunity with youth in development towns, underprivileged neighborhoods or cities with large immigrant populations.

“Tzofim gives you the confidence to open your mind to accept people who are different than you,” says Babkoff, who belonged to one of the organization’s all-religious troops.

Adds Klein: “You really can tell when someone has been in a certain circle of people. Tzofim are considered an elite group, and those who come out of it are very responsible. I probably came more prepared for each part of my life because of Tzofim. Kids get exposure to morals that they can’t always learn at home and at school, and that better prepares them for coming challenges.”