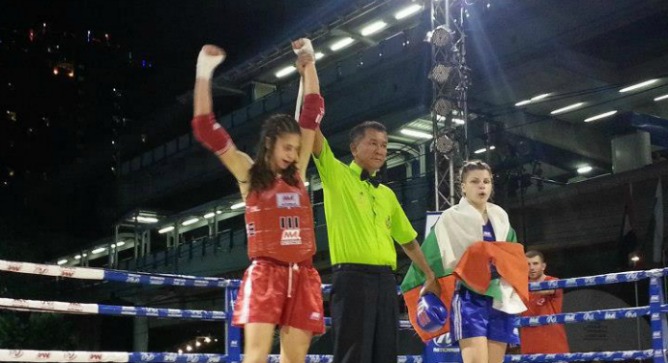 Block, from Beit Shemesh, also won first place in her age category in the XIX KickBox World Cup in Hungary, and bested hundreds of other girls in the 10K run of the 2013 Jerusalem Marathon.

Now 18, Block was only 10 years old when her mother, a volunteer on the Israel Border Police, took an interest in Thai boxing, a martial art form that began in Thailand centuries ago as a close combat battlefield technique. Little Nili adopted it as her own sport.

“I like that I can use my hands and legs,” she tells ISRAEL21c, echoing fellow Israeli Thai boxer Ilya Grad, who was crowned the 2013 World Muaythai Council (WMC) World Champion at the same event where Block and Abraham each placed first in the under-19 category for their respective weight divisions.

Abraham, who moved with her family from Mumbai to Kiryat Arba in Israel four years ago, tells ISRAEL21c that she’d long wanted to study martial arts for self-defense. When she saw a friend practicing the kickboxing form, she asked for the name of his coach and she’s been training ever since with Jerusalem-based Edi Usupov, who also trains Block.

“Thai boxing is different than tae kwon do, aikido or karate, because you don’t have levels,” Abraham explains. “I started Muay Thai two years ago, and in [the Japanese martial art] aikido I would still be a white belt.”

Neither of the girls is fazed by the specter of pain.

“It doesn’t bother me to get hurt,” Abraham says dismissively. “It happens so often it’s part of life already.”

“I flinch when someone hits near my eye,” admits Block, “but that’s a reflex I have to work on. My motto is ‘no pain, no gain.’ I have never wanted to stop.”

Block and Abraham have chosen a sport in which there aren’t many opponents of the female gender.

At the WMC World Championship, Block boxed one match against a Bulgarian teen who had bested a Vietnamese contender.

“I don’t feel I got to my full potential in that fight,” she says regretfully. “I could have punched more but I didn’t because in my corner they were urging me to wait for her to come in. I have a lot of stamina and I can tire out my opponents.”

She was happier with her performance in XIX KickBox in May, where she won first place in the 52- to 56-kilo category despite never having trained in kickboxing. “I had two fights. The first was a knockout in the first round, and the second fight, against a girl from Belarus, lasted three rounds,” she says. “It’s the same basic rules [as Thai boxing]. You just have to change your style a little.”

Abraham’s victory was won over a girl from England. She explains that there are three 90-second rounds in each bout, and the winner is determined by the judges on the basis of points and technique.

“Thai judges are very traditional,” Abraham says. “If someone wins by points but fights like an idiot, they’ll choose the one who fought more gracefully.”

What is even more unusual about these female fighters is that they are religious Jews.

Block says her parents, who immigrated from Baltimore, Maryland, when she was two years old, see her representation of Israel in the sports arena as a public sanctification of God’s name and support her 100 percent.

Abraham’s parents are not enthusiastic about their daughter’s sport, but her father pays her airfare for competitions. “Everything else I pay for myself. I do cleaning and I walk dogs to make money,” she says.

Both girls take kosher food along when traveling to meets, and consulted with a rabbi about how to handle bouts on the Sabbath. And both are seeking sponsors to help with their costs.

This summer, Block will be inducted into the military. She has applied for status as an athlete soldier, which would allow her to continue training and competing during her two years in the service.

“My goal is to get to the Olympics in regular boxing, and I know I have the potential,” she says. “I have already hired a coach.”

Abraham will be starting a year of National Service, accepting a position in Kiryat Arba that will not cause an interruption in her five-day-a-week training schedule. She says she very much wanted to be a combat soldier, but an army physical detected a problem with her thyroid, so she chose National Service over a military desk job.

For fun, Block plays basketball and soccer. From age 11, she also played flag football, but she gave that up last year. “I was doing too much and had to choose one sport to stop,” she explains. Block also distinguished herself at the 10K run of the 2013 Jerusalem Marathon, finishing in 44 minutes ahead of hundreds of 16- to 18-year-old girls.

Next up for Block and Abraham: a Thai boxing competition in Ukraine and a kickboxing contest in Poland two weeks later.