Bark if you love DogTV.

The new made-in-Israel US cable channel is scientifically programmed to keep pooches stimulated, happy and comforted when they’re home alone.

When dogs are left alone, they can get depressed, lose their appetite and their desire to play, says DogTV CEO Gilad Neumann. There are 46 million households with dogs in the United States, encompassing a total of 78.2 million pet canines.

“That’s quite a few potential viewers and many lonely dogs,” he tells ISRAEL21c. “It’s all very scientific, although I know it sounds like a joke. When you dig deeper, you see it’s a serious business.”

Time Warner Cable and Cox Communications began a six-month free trial of the 24-hour digital channel on February 13 among their one million viewers in San Diego, California. If it is successful, DogTV will be distributed more widely as a subscription-based service, says Neumann.

The concept came from the creative mind of Ron Levi, a New York-born dog lover and chief content officer at Jasmine Group, a private media communications company in Ramat Gan.

At the time, Neumann was CEO of Jasmine TV, one of several subsidiaries of the Jasmine media conglomerate whose July August production company recently sold the format for the hit game show “Who’s Still Standing?” to NBC Universal.

“We’re always seeking interesting ideas with an emphasis on international expansion. So when Ron approached me with this idea, I thought it was crazy enough to look into,” says Neumann. He suggested that Jasmine invest some seed money to explore the idea.

Their research revealed that the American Society for the Prevention of Cruelty to Animals, the American Veterinary Medical Association and the Humane Society of the United States all recommend leaving the TV on for dogs home alone, to provide stimulation and keep away stress and depression.

“We combined this with a lot of science on the effects of video on dogs, how they react to TV and what kind of visuals, music and sounds they enjoy,” says Neumann. 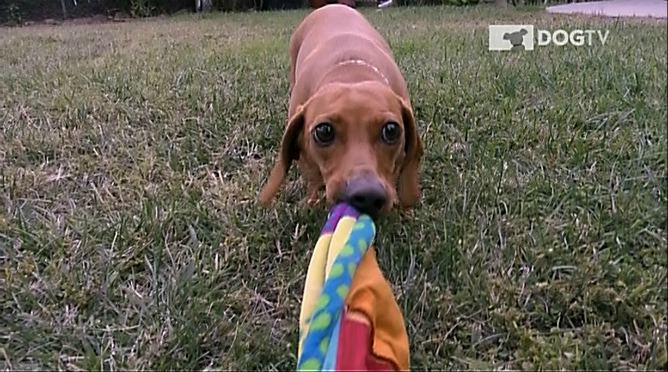 He recruited Prof. Nicholas Dodman of Tufts University’s animal behavior department as DogTV’s program director and chief scientist. Dodman explains on DogTV’s website that dog won’t sit on the couch for hours at a time watching the channel. It’s more like a backdrop with a pleasing soundtrack that they can choose to view as long as they wish.

British trainer Victoria Stilwell from the Animal Planet series “It’s Me or the Dog” and Warren Eckstein, an animal rights activist and pet trainer, round out the crew of DogTV experts.

“They added their knowledge to our production experience,” says Neumann, who holds an MBA from Pepperdine University in California and a law degree from the Israeli College of Management. “We worked very hard to make Ron’s idea a reality.”

The timing was right

As good as the idea was, it couldn’t have been put into action if not for the introduction of LCD television technology. Neumann explains that dogs’ eyes are bothered by the flickering frames on old analog televisions, though humans don’t notice them.

“Now they can see perfectly fine on LCD, but they can only see blue and yellow, so we enhance and recolor the contents for them,” Neumann explains.

As content developer, Levi organized the channel’s programming into three categories: shows meant to relax dogs, shows that stimulate them, and shows intended to expose them gently to situations with which they may need to get more comfortable — such as a running vacuum cleaner or street traffic.

“This creates a companionship environment,” says Neumann, “a channel that is fully suitable for dogs. Owners can be sure it’s all appropriate, and there is no content that scares or stresses the dog, like loud or sudden noises.”

This is hardly the first instance of an Israeli TV show hitting prime time in the United States. “In Treatment,” “Homeland,” “Traffic Light” and “The Ex List” went first, and recently CBS announced it is planning an American version of “Shalosh” (“Three”), an Israeli reality series about three women searching for love.

However, it is the first time a programming concept has gone directly from the Israeli drawing board to American TV screens. Neumann hopes DogTV is barking up the right tree.