The soaring sculptures of birds and angels that Dina Merhav crafts from scrap iron salvage not only the waste metal but also the artist’s hopes for a peaceful future.

If the very material used to make implements of destruction can instead be fashioned into symbols of peace and blessing, then perhaps there could be an end to the seemingly endless wars that have marked the Yugoslavian-born sculptress’s 76 years.

Just before her November “Birds in Chinese” exhibition opened at Artists House in Tel Aviv, Merhav welcomed ISRAEL21c into her sculpture- and plant-studded home at the Ein Hod artists’ colony near Haifa.

“I started to be a sculptress at 48,” relates the 1957 Bezalel Academy of Art and Design graduate. “Before that I worked for 28 years in graphic design.” She also taught at the University of Haifa, at an external program of the Technion-Israel Institute of Technology and at WIZO College in Haifa.

A WIZO pottery workshop opened Merhav to a new artistic path. She spent several months in Italy learning how to sculpt with Carrara marble. For the next five years, she did stone sculptures.

And then in November 1989, she got the commission that changed her life. It was from an unlikely source: Nesher Israel Cement Enterprises in Haifa, a huge industrial plant.

“I visited and saw the enormous mass of scrap iron in the junkyard, and I fell in love with it. I was so fascinated with the enormous, fantastic shapes and also with the soil that was inside it,” Merhav says. “Each iron piece was once part of a cement manufacturing machine, and now I’m giving it birth in an artistic form.”

One commission stretched into a decade and resulted in the sprawling Merhav Nesher Industrial Sculpture Park on the factory’s premises. This launched Merhav’s next 28 years of work – and counting.

“I want to spread out my sculptures all over the world,” says Merhav. “My ambition hasn’t dimmed with age. I feel I can do more, and better.”

Perhaps it was DNA that attracted Merhav to the giant metal heap at Nesher.

“I am the fourth generation working in iron,” she says. Her great-grandfather built an iron factory in Vincovci, now Croatia, which manufactured and traded stoves and agricultural tools. Her father was an iron trader.

The factory and Bauhaus-style family home in Vincovci still stand, and Merhav may mount an exhibit there next year. She left at age five, when Yugoslavia capitulated to Germany and her army officer father was taken prisoner. Her mother fled with her two preschoolers to Italy and later to Switzerland. They almost didn’t make it across the border of that supposedly neutral country. 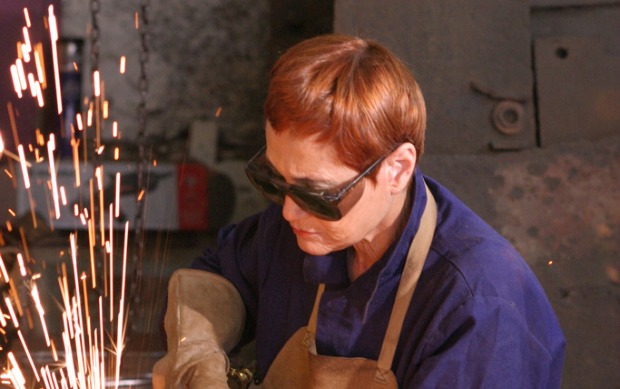 Dina Merhav at her workshop.

“The guards said, ‘Jews out! Only children may enter!’ but we were smuggled in,” she recalls. In 1998, she was privately commissioned to make a six-foot-tall angel sculpture for Geneva called Wings of Peace. “I closed the circle,” she says. “I left something of me in the city of peace, where Jews were told to get out.”

In 1949, the reunited Grosses joined relatives in Israel, leaving their assets behind. Merhav remembers spending the first few weeks at the refugee camp at Atlit, a few minutes’ drive from her home today.

Soon after finishing Bezalel Academy at age 21, she married medical student Aryeh Merhav. In 1962, their son Yaron was born. The couple divorced soon after, but remain friends to this day.

Yaron, an advertising executive in Tel Aviv, is married to opera singer Efrat Rotem and they have three young daughters.

In 2003, Merhav was invited to do an installation at Guilin YUZI Paradise international sculpture park in southern China. “It was during the SARS epidemic, and my family said I was crazy to go there,” she recalls. “I was the only woman and the only one my age.”

She finished two sculptures in six weeks: Bird of Paradise, a 24.5-foot totem of birds, carriages and wagons, which is now in a Shanghai sculpture park; and Fishing, the likeness of a cormorant catching a fish, now standing at the park’s main entrance. The attention garnered by these pieces won her a commission for the Olympic Park in Beijing.

Merhav has since installed additional works in Beijing and other parts of China, as well as India, Macedonia, Canada and the United States. The month-long Tel Aviv exhibition includes large sculptures and photographs of Merhav’s work in China, smaller models and a video display.

In Israel, the Merhav creations punctuating public spaces in a dozen cities have fanciful names such as Magic Forest, Angel’s Rest, Prayer, Jacob’s Ladder and Wings of Hope. 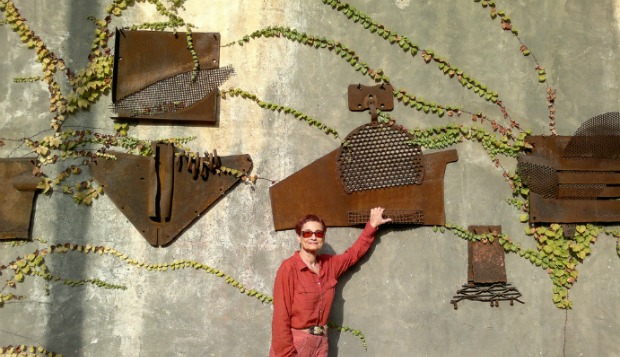 Gate to Heaven, commissioned by former Tel Aviv University President Haim Ben-Shahar in memory of his daughter, has particular resonance with the artist because the young woman had been her son Yaron’s life partner until her death from cancer.

Merhav believes her artworks are her visceral response to losses experienced through war and disease.

“Angels and birds have a wish to be connected with heaven,” she explains.

But she does not feel that her muse comes directly from above. “I think artistic inspiration is a myth,” she says. “The ideas are already there; you just have to collect them. I get ideas while washing dishes or swimming. If you are involved in a matter, ideas just come — sometimes easily, and sometimes you have to try and try until it comes.”