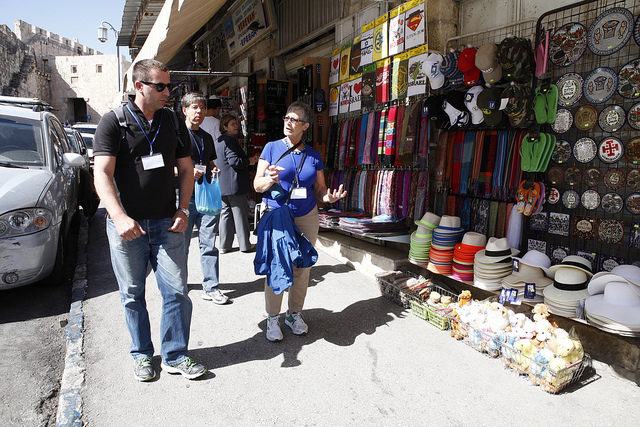 Tourists in Jerusalem. (Ariel Jerozolimski/ISRAEL21c)
Leading travel website TripAdvisor has released a new list citing the Top 10 Destinations on the Rise around the world, and ranks Jerusalem as the fourth most popular site to visit. The new ranking comes in the wake of the Tourism Ministry’s announcement of record-breaking numbers of tourists to Israel for the first quarter of 2014.

“Religious pilgrims have been traveling to Jerusalem for centuries, yet you don’t have to share their zeal in order to appreciate this city’s profound cultural and historical significance. Plan on seeing the major sights, but also leave plenty of time to walk through the streets and simply immerse yourself in the daily life of such an ancient and revered place,” wrote TripAdvisor in its blurb about the city.

There are over 5,200 Jerusalem related posts on the global travel advice website.

Meanwhile, the Tourism Ministry self-congratulated itself on a great start to the year saying January through April has shown “an excellent start to the tourism year 2014, following on from the record-breaking numbers of incoming tourists in 2013,” said Tourism Minister Dr. Uzi Landau. “We are working intensively to improve the quality of the tourism product, to effectively market Israel around the world and to strengthen domestic tourism so that 2014 will also close as a record year for tourism.”

Check out ISRAEL21c’s Top 18 things to do in Jerusalem for FREE.