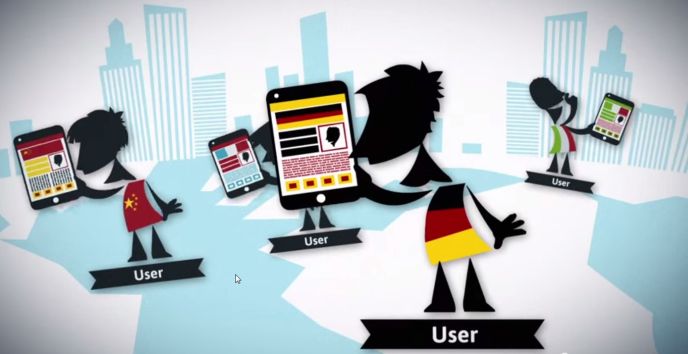 Lingui is One Hour Translation’s new solution for app developers.

Lingui is One Hour Translation’s new solution for app developers.

Developers in search of a better way to translate apps into different languages started signing up for Lingui Instant App Localization Solution the moment it was introduced at the Mobile World Congress in Barcelona in March.

Lingui is the latest service from Israel’s One Hour Translation, which has grown to be the world’s largest online translation agency since its founding in 2009.

Launched by the Rehovot-based company’s subsidiary, OHT-Mobile, Lingui inserts a few lines of code to extract all text from an app. The administrator selects the target language and mode of translation (machine, professional human or crowdsourced) and when the translation is complete the update goes live instantly. No need to republish or update the app on the user’s device.

“One of the biggest challenges facing developers is how to make their applications accessible and engaging for users around the world,” says CEO Ofer Shoshan, who offered the platform free to early adopters including Deutsche Telecom. Normally the SDK costs $100 per month.

“Until now, any newly translated apps would have to be uploaded to the relevant app stores, delaying the time to get the app to market. What’s more, users often had to update the app in order to get support for new languages or updated translation. With Lingui, your app translations and supported languages are managed on OHT-Mobile’s cloud.”

He says that many developers are surprised when their app proves popular in other countries. “Once they invest relatively little effort and money, they get a much wider audience for their app,” Shoshan tells ISRAEL21c.

Translating language and nuances of ads

In addition to OHT-Mobile, One Hour Translation has two other new divisions: OHT-Enterprise and OHT-Media.

OHT-Enterprise, based in Washington, DC, was set up to serve worldwide corporate clients including the likes of Toyota, Coca-Cola, Shell and IBM. “We work with more than half the Fortune 500 companies,” Shoshan says.

Business clients can use the services of OHT-Enterprise not only to translate their documents but also to localize, proofread and edit marketing material, websites, contracts, legal documentation, mobile and desktop applications, online advertising, landing pages and white papers.

The second new division, OHT-Media, helps advertisers localize ad campaigns in foreign target markets. “Translating it is not enough,” Shoshan says. Often there are cultural nuances that need to be tweaked as well.

“An approach that works in the US doesn’t necessarily work in other countries. You need to change the whole attitude for target markets by creating several localized versions of the ad,” he says.

Focus groups of native speakers in the target country rate the translated ad versions in order to identify the most effective one, and OHT-Media hosts trial ads on its server to further determine which is more compelling.

Shoshan notes that One Hour Translation’s free fast-translation app for Twitter was named the best mobile application for fans at the 2014 Winter Olympics. The app was also offered free to spectators at the World Cup in Brazil.

“As part of our community involvement, we do what we can to help in cases of international events, both positive ones like sporting events and negative ones like natural disasters,” says Shoshan. “We provided free translation for rescue teams In Haiti after the earthquake, in Fukushima after the tsunami and after the typhoon in the Philippines last year.”

One Hour Translation, cofounded by Yaron Kaufman (CMO), Lior Libman (COO) and Oren Yagev (CTO), is one of a handful of translation vendors Google offers developers. The company raised $10 million in its first funding round last year, and has three US offices in addition to one each in Cyprus, Bucharest and Kiev. Additional branches are opening soon in Berlin and other key cities.

“Right now we have 150 employees all over the world, plus more than 15,000 translators in 100 countries, many of whom work with us full time,” says Shoshan, a serial entrepreneur and board member of the MITEnterprise Forum of Israel, which provides business consulting services to high-tech startups.

One Hour Translation can handle about 75 of the world’s 80 written languages. Not all translation jobs can be accomplished in 60 minutes, of course; the company’s name reflects its commitment to moving assignments along as quickly as possible, 24/7.

Several Israeli companies are making strides in the translation world, as the worldwide market for outsourced language services and technology reached some $37.19 billion in 2014. ISRAEL21c recently featured Smartlation, a Haifa-based search engine matching users with registered translators who best meet their exact requirements and budget.

Shoshan says that one of the unique aspects of One Hour Translation is that “we support many different technologies and platforms, so our customers can translate much more than just Word files.”

UNCOVER ISRAEL - Get the ISRAEL21c
Weekly Edition free by email
Sign Up Now!
Bring Israel's story to life.
Millions of people around the world rely on us to gain a deeper understanding of Israel. We are the trusted source for original content you won't find anywhere else.
You can make a difference. Donate today to support journalism that brings Israel’s story alive.
SUPPORT ISRAEL21c
Read more on:   Culture, Technology, One Hour Translation, online translation, Israeli apps