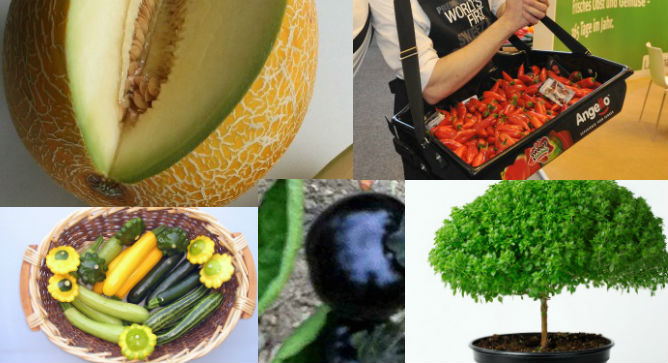 Since the first half of the 20th century, Israeli agricultural wizards have been partnering with Mother Nature to bring new fruit and vegetable varieties to the global market, from vividly colored squash to seedless peppers.

Every year, Israel exports more than $2 billion worth of produce – tomatoes are its fourth-largest commodity — and is among the world’s top developers of better-looking, better-tasting, disease-resistant and more nutritious varieties.

According to Harry Paris, a senior scientist at the government-sponsored Volcani Institute-Agricultural Research Organization, one of the first success stories in this area is the seedless, hardy Bet Alpha cucumber, introduced in 1936. Its descendants across the world are still going strong. The 1950s Ananas Yoqne‘am and Ha‘Ogen melons also set a global commercial standard. 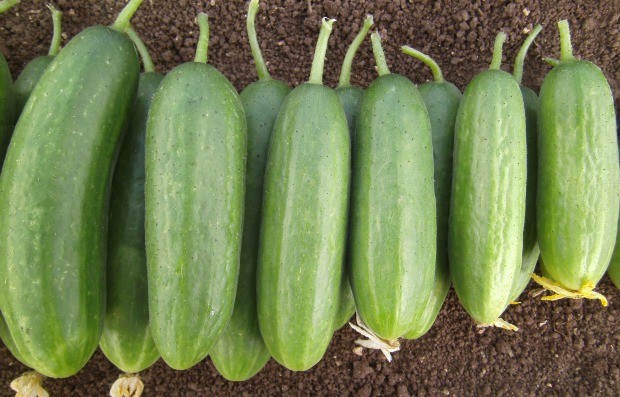 “The two melons and the cucumber have had a huge international impact,” says Paris. “Their quality inspired successive improvements by Israeli breeder-geneticists. Today, an uncountable variety [of Israeli hybrid produce] has been bred by professionals.”

You’ll probably find more Israel-invented types of fruits and vegetables (as well as hothouse flowers) growing abroad than in the land of their development, simply because little Israel can’t produce on the same scale as countries such as the United States. But blue-and-white innovation is in every bite no matter where it grows.

ISRAEL21c chose this “salad” of a dozen top Israeli-bred fruits and veggies. Look for many more in your local market.

1. The Galia melon, released to the market in 1974 by breeders Zvi Karchi and Anneke Govers, became a multimillion-dollar hit internationally. A descendant of Ha‘Ogen, Galia has succeeded so spectacularly, Paris says, because it looks, smells and tastes good. All those factors contribute to enticing people to try the fruit and then come back for more … and more. Volcani licensees went on to develop additional offshoots of the Galia that are popular worldwide. 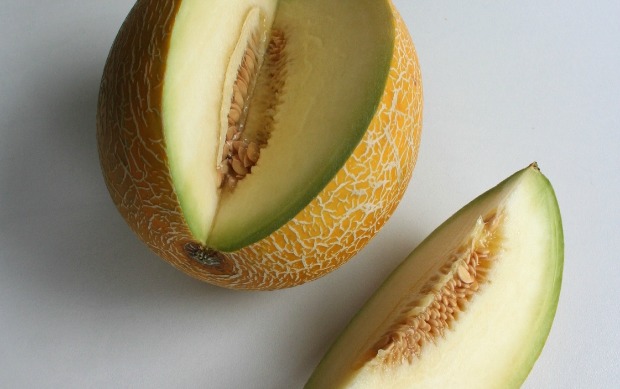 2. Orangetti spaghetti squash, now the only spaghetti squash sold in Israel, was the first hybrid Israeli vegetable grown in the United States under its own name. Its intense orange color (as opposed to its pale yellow cousin) makes it better looking, better tasting and richer in beta-carotene and other antioxidants. Paris began developing Orangetti in 1979 and it was released in 1986. 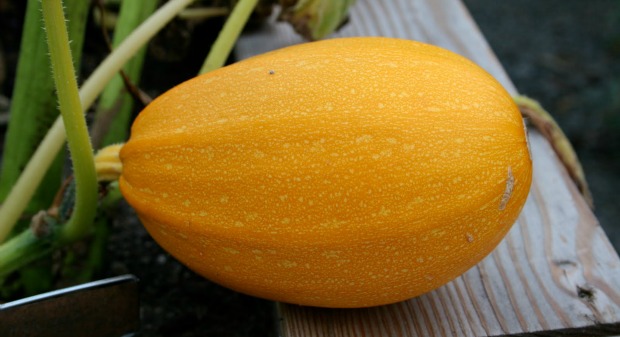 The Orangetti looks and tastes better than other spaghetti squash.

3. Ben Dor Fruits & Nurseries’ nectarine-mango is heart-shaped with a smooth peel. The fruit took 10 years to perfect and went on the market in Israel, the UK and South Africa in June 2012. Ben Dor also breeds hybrid stone fruits such as the plumegranate (a pomegranate-colored plum), the lemon-shaped lamoon plum, the pita peach and many others.

4. The pomelit grapefruit-pomelo (pummelo) hybrid is another Ben Dor innovation. Marketed overseas as Sweetie, this juicy fruit is sweeter and less acidic than a grapefruit, smaller than a pomelo and much easier to peel. Plus, the pomelit has been proven to lower blood cholesterol and enhance anti-oxidant activity in the body.

5. Angello, the first seedless bell pepper in the world, won the Fruit Logistica Innovation Award in 2012. The development of the mini seedless red pepper began six years ago at the Israeli seed company Zeraim Gedera. For now it’s grown only in Israel and Spain, and as it hits the world market additional varieties in other colors are soon to follow. 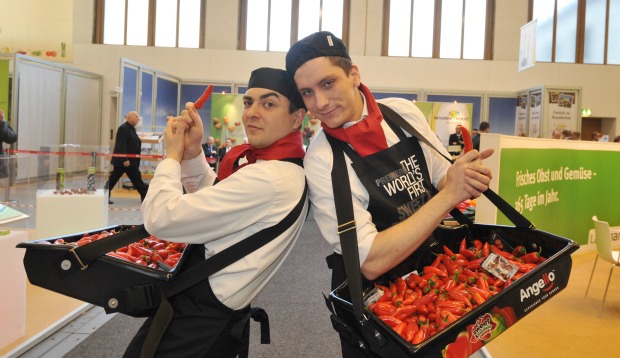 The Angello seedless pepper was a sensation at Fruit Logistica in Switzerland.

6. The Black Galaxy tomato was introduced to international markets in early 2012 but had already won high acclaim in its native Israel. The dark salad staple was developed by Technological Seeds DM using a pigment derived from blueberries. Black Galaxy not only looks exotic but also contains higher concentrations of vitamin C than garden-variety tomatoes. 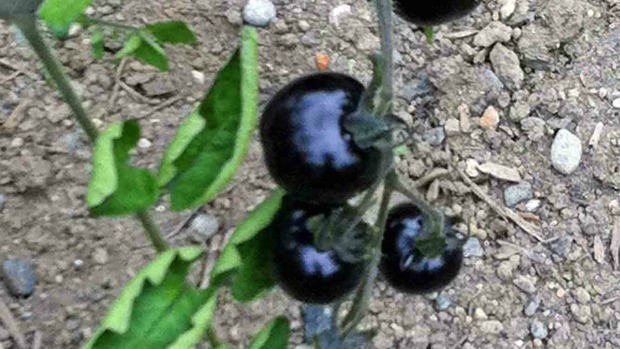 Black Galaxy tomatoes on the vine.

7. Goldy zucchini squash was developed by the Volcani’s Harry Paris and released in 1983. “It’s still the best-looking yellow zucchini out there, and still selling 30 years later,” he says. Goldy is popular in major markets abroad, and its bright yellow color makes it less moist and more flavorful than similar squashes. Paris recommends frying slices like cutlets, or using Goldy in quiches and other cheese dishes because it’s never runny. 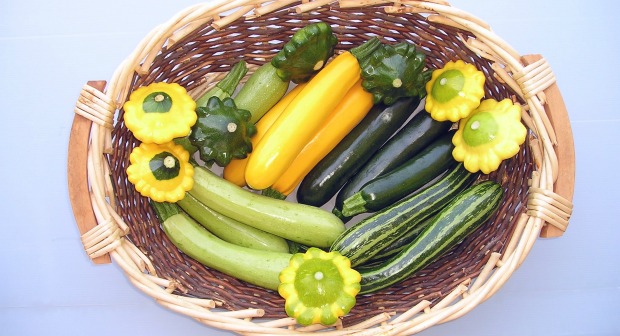 Goldy zucchini are in the middle of this basket of squash. Photo by Harry Paris

8. Nano Watermelon — sweeter than the original, a slightly different color and no heavier than three kilograms (6.6 pounds) – is a recent new product resulting from three years of development by Origene Seeds CEO Dr. Eyal Vardi. Hishtil Nurseries and Itay Gal, a farmer from Moshav Ein Yahav, raised the first ones as a test, and the melon was a hit.

9. Another Hishtil innovation is the mini basil tree, a novel solution to the problem of the herb’s naturally short shelf life. By grafting two types of basil plants together, Hishtil got a hardy strain that grows a sturdy trunk and leafy aromatic leaves. It can grow outdoors in warmer weather and be brought inside during winter. 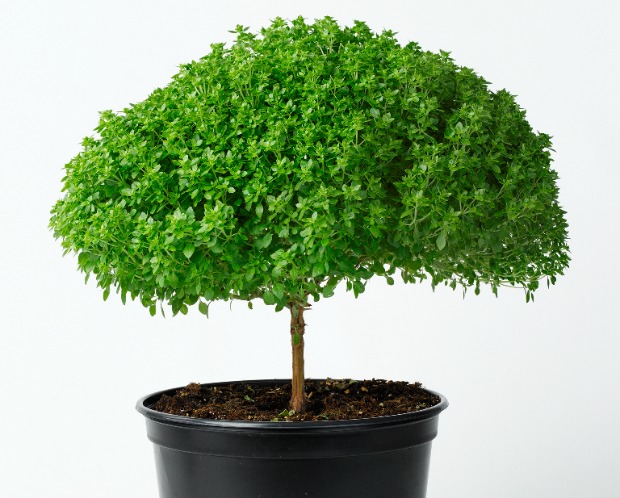 10. TableSugar acorn squash, released by Volcani in 2007 and commercialized by Origene Seeds, takes the “bland” out of this hardy vegetable. It has twice as much sugar as regular acorn squash, is half the size, and has a black-green skin that boosts its shelf life and flavor. Its roasted chestnut taste has made TableSugar extremely popular. Says Paris, who spent 12 years developing it: “Buy a lot in July, then keep it in the fridge for a few months so the starch turns into sugar. They just get sweeter with age.” And it won’t get the powdery mildew disease that afflicts many squashes.

11. Handsome cluster (Truss) tomatoes common in Europe, North America, Japan and Israel were made possible by the introduction of shelf-life-extending genes from Hazera Genetics in cooperation with BonTom, the vegetable breeding and research group at the Hebrew University. BonTom scientists are also behind other major tomato advances, including the sweeter and longer-lasting cherry tomatoes that debuted in the 1990s and became the standard worldwide.

12. The Anna apple — developed by Volcani horticulturist Ephraim Slor and named after his daughter — is a Golden Delicious-style fruit for cultivation in areas where winter temperatures rarely drop to freezing. Most apple varieties need that winter chill to thrive, but Anna ripens in the early summer and grows beautifully in hot climates such as Egypt, Indonesia, southern California and southern Texas. 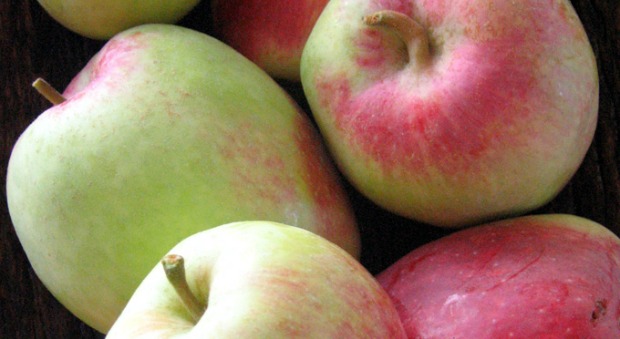 Anna apples.
UNCOVER ISRAEL - Get the ISRAEL21c
Weekly Edition free by email
Sign Up Now!
Bring Israel's story to life.
Millions of people around the world rely on us to gain a deeper understanding of Israel. We are the trusted source for original content you won't find anywhere else.
You can make a difference. Donate today to support journalism that brings Israel’s story alive.
SUPPORT ISRAEL21c
Read more on:   Volcani Institute, Harry Paris, Beit Alfa, Israeli produce, Environment, Agritech