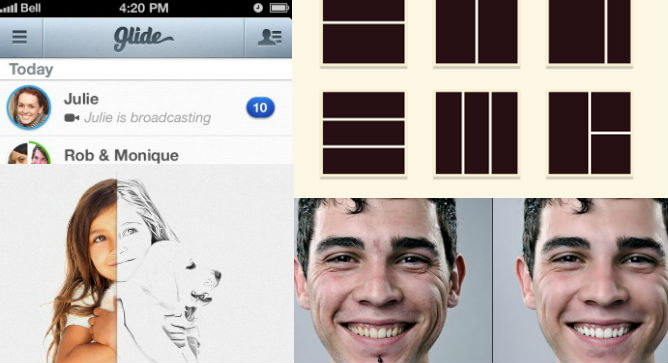 We at ISRAEL2c are thinking of renaming Israel “App Nation.”

Mobile applications are coming out of Israeli startups on a seemingly never-ending basis. We’ve reported on many of them separately and will continue to do so. Meanwhile, we are launching periodic roundups of the best Israeli apps in a range of categories.

This week, we bring you (in no particular order) top photo and video apps devised by Israelis.

Listed on the Apple App Store’s “Best Apps of 2012,″ this program from Macadamia Apps lets you create the best possible group portrait from a collection of shots. A powerful set of algorithms deletes a flawed photo detail (Aunt Betty sneezing, perhaps) and replaces it with a better image from another photo in the collection, in a simple and intuitive way.

Mobile picture-and-video-sharing platform Mobli has won big bucks from celebrity investors including Leonardo di Caprio, Tobey Maguire, Lance Armstrong and Serena Williams. Recently unveiled are new auto-edit options and location-specific filters. In a bid to unseat its main rival, Mobli ran a contest through June 30 where Instagram users could upload an original picture and tag it on both platforms, then quit Instagram for at least three months. Judges will select the most original and creative picture and award the winner $100,000 (to be announced in October). 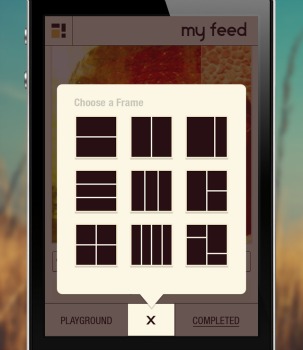 Choose a template for your Pixplit collage.

Pixplit lets users collaborate in a visual dialogue, creating a photo collage in two to four parts (“splits”). The viral social nature of the cloud-based app is its best selling point. Users create profiles; friends follow each other, commenting on and “liking” each other’s collages. A real-time feed displays completed splits as well as splits with open spaces waiting to be filled by friends — or friends of friends.

Like a professional human film editor — but a lot faster and cheaper — Magisto uses artificial intelligence to automatically select the best parts of videos shot with your smartphone, then adds your chosen music, themes and effects, and splices them into polished movies to share. The new Draw a Video feature allows users to add hand-drawn special effects. In May, Magisto launched on Google Chrome’s Packaged App Platform, meaning it’s included on Chrome’s native apps.

This is not another app for making a slideshow “video.” Takes uses your smartphone’s motion-sensing technology to turn pictures into moving images instantly and seamlessly. Imagine snapping pictures throughout a three-hour party, and then using Takes to transform all those stills into a movie. You can spice up your video with filters, and add music from the app’s royalty-free soundtrack library.

Tagline: “Putting your best face forward.” Pixtr, still in beta, uses computer vision and machine learning algorithms to gauge parameters such as your age, likes and dislikes, and then touches up your pictures accordingly — eliminating red-eye, skin “artifacts” and asymmetry. Microsoft Israel R&D Center liked this photo-improvement app so much that it accepted Pixtr into its four-month accelerator for Windows Azure.

Select an effect, upload an image from your computer, watch the app do its magic and then save, email, print, blog or share your enhanced photo on social media platforms. Just some of the cool effects: turn your photo into a Christmas ornament, a stone mosaic, a Rubik’s cube, a jigsaw puzzle or a LEGO construction. Dumpr comes from Gil Megidish of Macadamia Apps, the same Israeli video-game developer behind GroupShot. 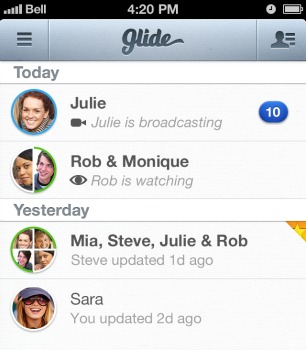 Billed as “video walkie-talkie,” Glide Talk allows iPhone users to record and message brief video clips to several Facebook friends at once. If a recipient is offline, no problem; he or she can watch later. Because it’s based in the cloud, the video message doesn’t take up phone memory, and requires no uploading or downloading. At the recent TechCrunch Disrupt New York event, Glide was chosen first Audience Choice Battlefield company, and launched the beta version of its Android app.

With PhotoMania, you don’t need any technical know-how or artistic talent to create a work of art (anything from a cartoon to a sketch to a vintage B&W) from your plain ol’ photos. This app lives on the Facebook platform and lets users choose from 400 photo effects just by clicking the mouse. 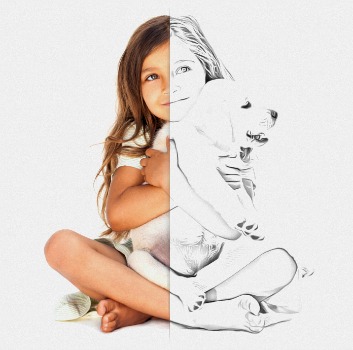 One of the possible PhotoMania effects.

This free application accesses your photo library and then automatically organizes your pics into interactive, edit-able albums. Plus, Flayvr offers tools for one-click sharing to social network sites or via SMS or email. The UK’s Guardian named Flayvr one of its top 20 Android apps for the week of May 12, 2013.

Use this iPhone application to combine your photos, videos and tweets from social networks, and automatically organize them into multimedia albums (“moments”) where friends can see 360-degree views of your entire experience. The system is based on proprietary “smart-matching” technology. If the event you’re documenting is still in progress, a red “Live” banner indicates that more is yet to come. 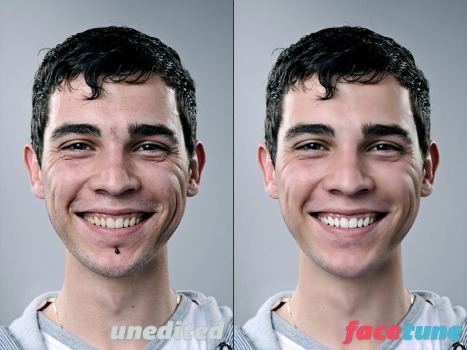 Founded by Jerusalem’s Lightricks, Facetune is a new state-of-the-art image-editing iPhone application promising “to give every user the ability to easily edit portrait photos like a Photoshop expert.” Its trademarked SafeBrush technology uses computer vision and machine learning tools to comprehend the precise area that the user wants to be retouched with anything from tooth whitening and hair coloring to changing the proportions of a face.

UNCOVER ISRAEL - Get the ISRAEL21c
Weekly Edition free by email
Sign Up Now!
Bring Israel's story to life.
Millions of people around the world rely on us to gain a deeper understanding of Israel. We are the trusted source for original content you won't find anywhere else.
You can make a difference. Donate today to support journalism that brings Israel’s story alive.
SUPPORT ISRAEL21c
Read more on:   Mobile, Technology, Israeli apps