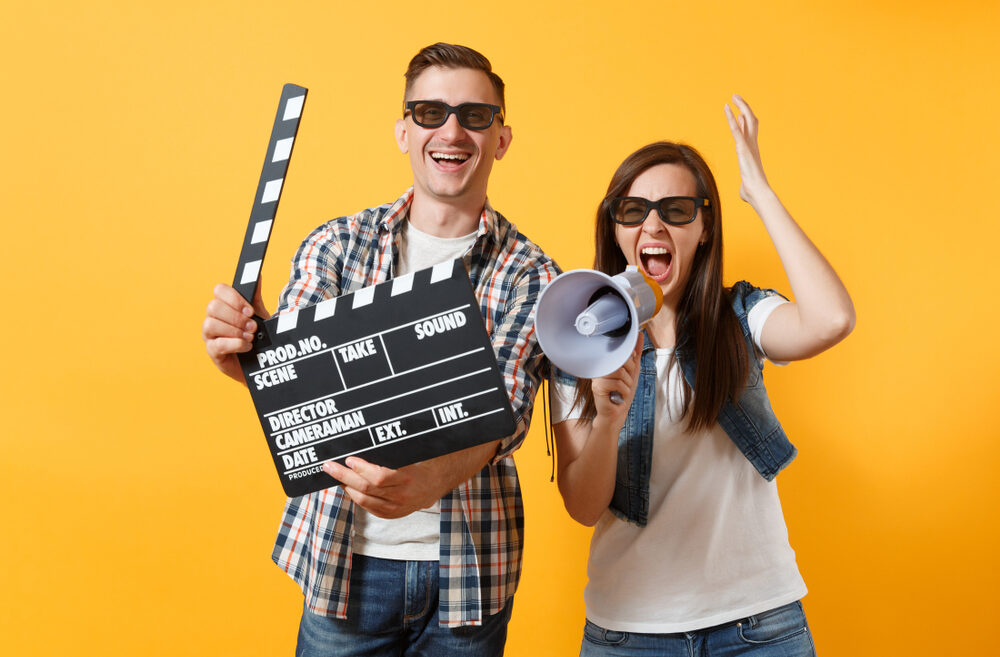 Coronavirus lockdowns were not how anyone expected to spend the first part of 2020. But if there was a silver lining, it was that many of us learned some new skills, including making our own do-it-yourself quarantine videos.

Social media was filled with homemade productions. Some of them were even made with Israeli technology.

Want to get in on the fun post-quarantine? Here are ISRAEL21c’s top 10 picks for video magic from your phone or home computer.

You don’t need to be a professional to create a video that looks like one. You don’t even have to have a computer. Enlight Videoleap from Jerusalem-based Lightricks accesses videos on your phone and allows you to do tricks that formerly required expensive editing software.

Blend two or more clips together, adjust speed and sound, add filters and voiceovers, replace the background using a virtual green screen, add text, effects, transitions and stickers. All the processing is done on your phone so you don’t need to be connected.

Videoleap can output in 4K and post directly to social media. The app has been downloaded 30 million times is available in 11 languages. It won Apple’s App of the Year just three months after its release in 2017.

Videoleap is an official TikTok partner, too. Free to use but requires in-app purchases to access some of its more powerful tools. Here are some Insta-examples.

Although intended mainly for corporations, Powtoon can also help you create videos at home. Powtoon’s claim: If you can create a PowerPoint, you can make a video without technical or design expertise.

The desktop interface is drag-and-drop with lots of templates, royalty-free characters, soundtracks, stock footage and images. Powtoon started out as a tool for making short animated training videos but has since added live action. Create your own infographics or one of those popular animated whiteboard drawings.

Powtoon Pro is $29 a month; a free version limits your videos to three minutes. Powtoon has 27 million users including 96 percent of the Fortune 500 as customers. Powtoon acquired one of ISRAEL21c’s other top video picks, Showbox, in 2019.

Ever wonder how the pros get their video speeches down so perfectly? They’re reading off a teleprompter. Now you can too, with Beersheba-based Bigvu’s mobile phone app.

Bigvu displays the words you’ll be reading on the screen while it records you using your front-facing (selfie) camera. The teleprompter text is at the top of the screen, so it appears you’re looking directly towards the camera.

The app can add instant subtitles from your text that stay in sync with the narration. You can add logos and titles and, if you don’t like the background, swap it for another using a green screen.

There’s an editor so you can include your own images, videos, music and even tweets. Then share your creation directly to social media. Bigvu runs on Apple and Android phones. After a free three-day trial, pricing starts at $14 per month.

We first wrote about Magisto in 2012, when the then-new Ness Tziona-based startup caught our attention for its ability to scan a video you’ve recorded and automatically select the most interesting moments to highlight.

Company founder Oren Boiman told ISRAEL21c that he came up with the idea while trying to figure out what to do with the many hours of video he’d shot of his new daughter.

Since then, Magisto has perfected its artificial intelligence algorithms. It recognizes faces and the most interesting action while ignoring shaky shots. Magisto will zoom in and pan out and you can add music that will sync to the transitions Magisto picks (you can edit the final version).

Available for mobile phone or desktop, pricing starts at $5 per month. Thirteen million users have used Magisto to create 450 million videos in 24 languages.

In 2019, Magisto was acquired by Vimeo in a deal reportedly worth $200 million. But fans don’t have to worry: Magisto still runs under its existing brand.

Tel Aviv-based Promo.com started out as Easy Hi in 2012 with a product called Slidely, an application that allowed users to create videos from still photos (“slides”) and music. Two-hundred million people used the app.

In 2016, the company launched a B2B version called Promo, aimed at helping companies create marketing videos. Promo grew so fast that the company pivoted and focused on the corporate space. In 2019, Slidely was rebranded as Promo.com. 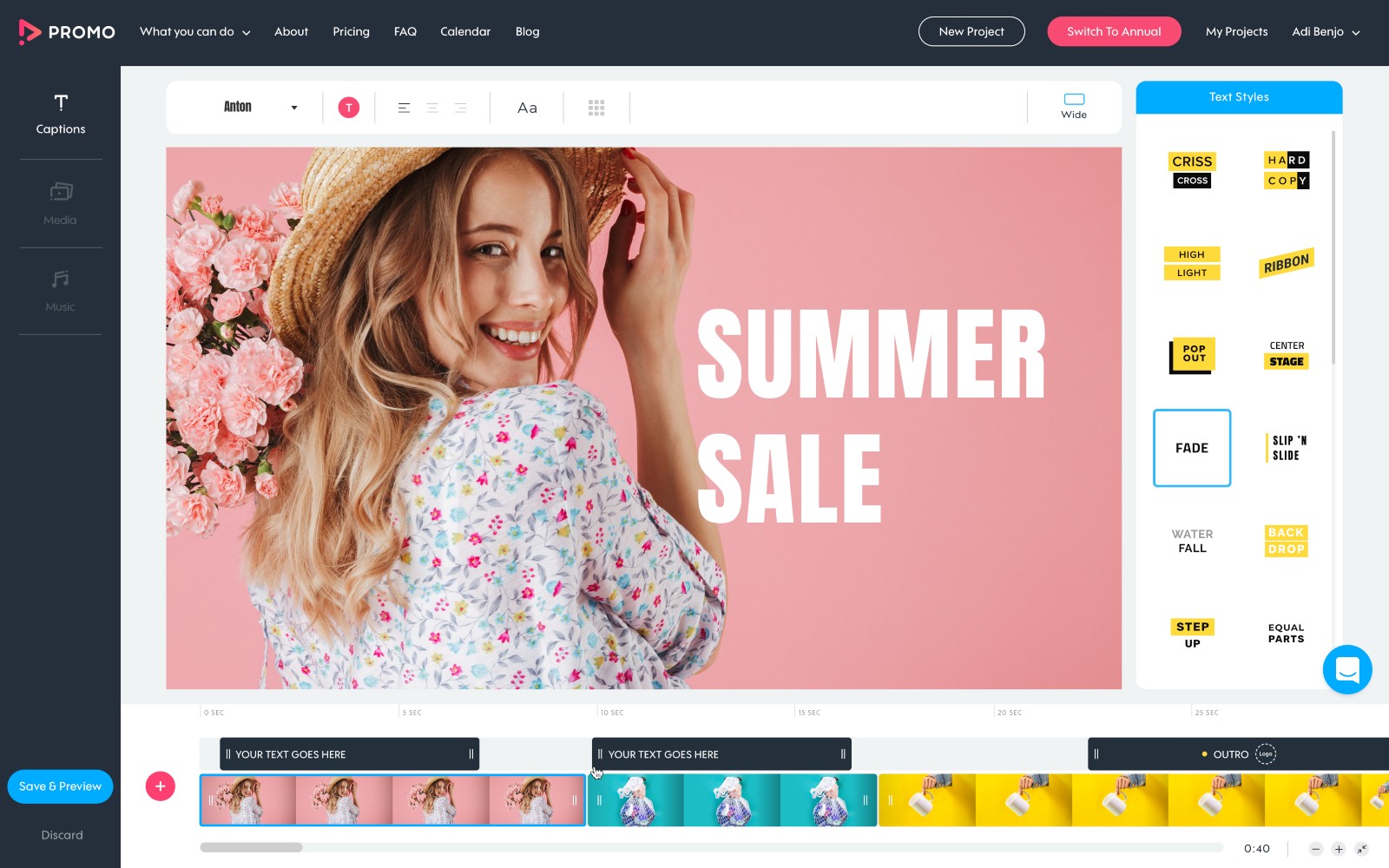 The company says that over a million businesses have created some 60 million videos with Promo. If you’re creating promotional videos from home (or the socially distanced office), Promo should be on your short list.

In 2018, Promo won best B2B product of the year from ProductHunt. Ready-made templates speed you on the way to everything from real estate and retail ads to coronavirus-related videos. Promo starts at $40 a month, topping out as high as $250 a month.

Don’t like the way you look on screen? Let Hour One’s artificial intelligence create a synthetic character that can do the presenting for you. You tell “Niki,” “Dani” or “Chris” what to say, and your viewers will never know she’s not a real person.

The technology is mainly meant for business – virtual salespeople and tech support in the electronics, fashion, beauty and food industries. But if you want to get into the fun at home, you can apply to have your likeness used to become a future Hour One character.

Hour One already has dozens of synthetic presenters ready to go. The company recently created digital characters for the World Health Organization to explain Covid-19 with a “human” touch. Hour One made the semifinals of the Collision Conf PITCH event.

Loads of musicians have been making videos of themselves jamming from home. Most are in their rooms alone. Wouldn’t it be great to see yourself in front of a crowd at Wembley Stadium?

Yokne’am-based Spectalix can separate you and your guitar from the background and superimpose the video anywhere you like, in live video or a pre-recorded clip. Spectalix has a cool demo on its website of a singer in his living room placed into a motion video of a heavy metal concert complete with virtual bandmates. There’s also one of a basketball player facing off against an artificial opponent.

And for yoga instructors, you no longer need to be limited by the four walls of your home studio: take your yoga mat to the virtual beach. You don’t need a green screen. The app needs only a standard 2D camera; there’s no need for extra sensors or cloud processing.

Israeli startup Snappers allows anyone with a mobile device to become an instant video “stringer,” a freelancer who contracts with a media network to report from the field.

If one of Snappers’ media partners, which include CNN among others, needs video from a particular location, and you’re a Snappers’ customer, they’ll see you on their Snappers map and can contact you to provide live reporting.

There’s a built-in communication channel in the app so your producer can tell you what to do (“stand six feet away from that guy without the mask!”) If you’re talented, maybe your video will even go viral — in the virtual sense of the word.

With a starting price of $425 per month, Wibbitz is clearly not intended for do-it-yourself home video makers, but we’d be remiss in not mentioning the most powerful Israel-made video creation tool.

Wibbitz says you can create a professional video in just seven minutes. There are hundreds of ready-made templates to choose from and millions of licensed photos, videos and soundtracks. Adding text and overlays is drag-and-drop; sharing is a click away.

If you’re working from home and your employer is Bloomberg, TMZ, Reuters, Forbes or NBC, chances are you’re already familiar with Wibbitz (those are just some of the company’s clients). Zohar Dayan, who founded the company in 2011, says Wibbitz’s goal is to make Wibbitz videos indistinguishable from videos created by humans.

On the Idomoo website’s home page there’s an offer to “create and share your own personalized #MyThankYouVideo” that you can send out to your favorite healthcare or essential worker in these chaotic times.

This home-use option is based on Idomoo’s technology, which is mainly targeted at corporations. Idomoo enables clients to create personalized sales and marketing videos where the recipient’s name features prominently in both text, audio and video.

A personalized video for Barclay’s Bank, for example, urges a recipient named “Claire” to take out a loan. The same video can be re-purposed for “Cindy” and “Christopher” without having to shoot it all from scratch.

In a video for BT, a customer service rep explains to “Mark” how to read his telephone bill. Personalized videos increase brand recognition fourfold and can boost conversion rates by 24%, the company says. The company’s 150 clients include Adidas, Chase, Cadbury, Google and more.