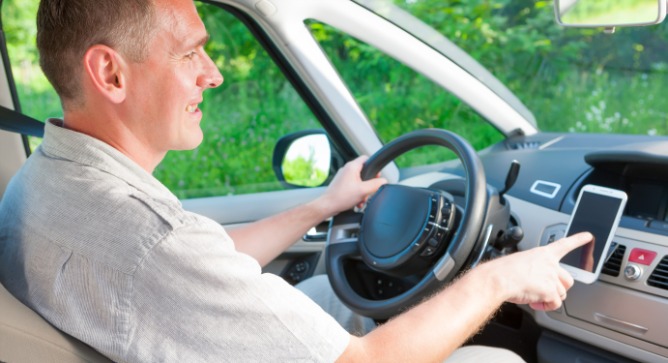 Smart phone apps are transforming the way we make journeys. Image via Shutterstock.

Whether it’s a navigation aid you’re seeking, or a city bus or parking, these apps have you covered. One will check your tire pressure and another checks your breath to gauge if you’re too tipsy to drive – and it’ll even hail you a cab if you are. 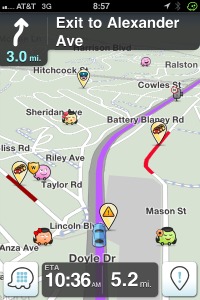 Waze was a global household name even before it was judged the world’s best mobile app and Google plunked down $1.03 billion to buy it in June.

Waze also allows drivers to build maps together and create private groups to share traffic tips. The service began in Israel but is available all over the world.

iOnRoad uses iPhone and Android smartphones’ cameras, sensors and GPS to determine hazards – for example, if a driver is too close to the car ahead or is exceeding the speed limit — and sends an audiovisual alert. The app’s personal dashboard lets the driver play music, make a phone call or check a map, with just a single tap.

At a cost of less than $9 per tour, this app is a boon for cost-conscious travelers opting to see the sights on their own. The tours are narrated by professional guides and cover each location’s “must see” tourist attractions. No Internet fees apply while traveling with the app on.

The Alcohoot app works with a smartphone Breathalyzer gadget invented by two former Israeli soldiers. Blow into the device and see your blood-alcohol level displayed on screen.

The app tracks your results over time to help you make smarter decisions, and will even order you a taxi if you’ve had too much to drink. You can also use it to find nearby restaurants.

The Israeli company Neomatix recently released a smartphone app that takes the work, dirt and gadgetry out of checking your tire pressure. Select your car from the list, point your phone’s camera at each tire, and TireCheck provides an estimated pressure reading. If a tire is under-inflated, the app tells you the nearest location of an air pump, as well as how much air you need to add.

Whether you’re in Tel Aviv, London, New York, Paris, Berlin or Moscow, if you have this app you never have to stand on the curb hailing a cab. The GetTaxi mobile phone app lets you request a cab from a call center with a screen tap.

You can watch on the screen, in real time, as your taxi approaches. The app also provides your driver’s picture, name, license number and ratings by other users. Last year, GetTaxi raised $20 million toward its New York launch.

Moovit is a free, community-based mobile app that helps you navigate every step of a trip via public transportation. It shows you where to find your bus stop and gives walking directions from the closest stop to your destination.

Based on Open Street Maps, Moovit uses schedules from transportation companies and GPS data from buses on the move. It even collects data passively from other users, determining how fast they’re progressing on a bus, for instance. Users can send reports about travel conditions and delays.

Available only in Israel for now, Netbus pulls real-time data from the GPS tracking reported every 20 seconds to servers at the Ministry of Transportation, providing real-time data about whatever public bus you are waiting for.

On the screen, the user sees a map showing the progress of the bus in traffic. The developers tell ISRAEL21c they plan to extend it overseas; no word yet on when that might happen.

Once you’ve gotten where you’re going, you need to park the car. The following apps are among several made-in-Israel approaches to spare you from circling the block and fiddling with machines to pay your parking fee.

Pango, billed as the world’s first pay-by-mobile-phone parking solution, lets users locate, book and pay for garage parking spots via smartphone. PangoUSA operates in an ever-increasing number of cities, such as New York and Phoenix.

Parko brings a crowdsourcing solution to parking by connecting users hunting for a spot with users about to leave a spot.

Most of the action is automatic, thanks to GPS sensors that tells the app when a user seems to have parked and left the vehicle, and when the driver is again approaching the car. Parko won the Google-sponsored Israeli Mobile Challenge competition in June 2012.

CellOPark has implemented its mobile parking payment system so far in Germany, Israel, Brazil and Spain. Using their smartphones, subscribers pay for parking in public spaces allocated by municipalities affiliated with the CellOPark system. The parking is calculated and paid for per minute, and payments are made once a month by credit card.

There’s never a cop around when you see a bad driver, right? Israeli startup Nirsham (“Recorded”) has solved that problem – only in Israel, for now — with a mobile app to document and monitor such misbehaviors as road bullying and traffic violations.

Its designated camera works in “pedestrian” or “driver” modes. The latter needs just one push of a button to record what’s happening outside the windshield. Photos are posted for a week on the company website. Based on input from viewers, Nirsham can report offenders to the proper authorities.