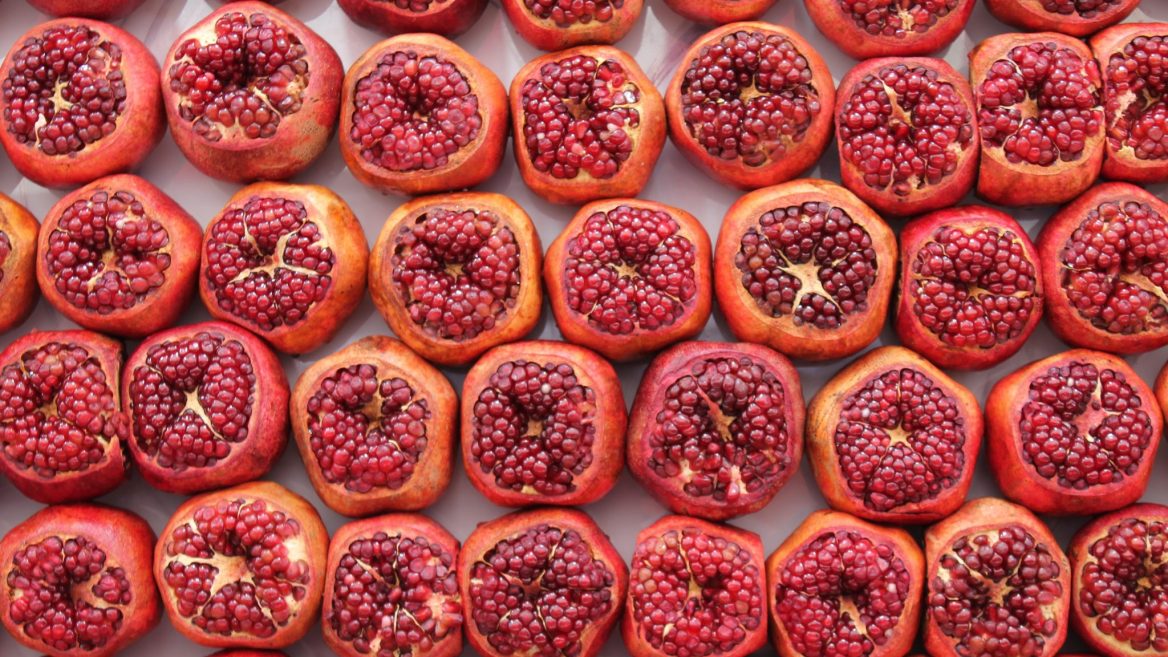 The fruit-with-a-crown is one of the ritual foods for the Rosh Hashana holiday. It is understood to be the fruit that grew in the Garden of Eden and which biblical scouts brought to Moses to show the fertility of the promised land. It is also said to have 613 seeds – corresponding to the 613 mitzvot (commandments) in the Torah.

The pomegranate is a fun-to-eat but messy treat packing a tart and sweet taste. And this beautiful fruit is celebrated for its medicinal powers.

ISRAEL21c gives you 10 great reasons to add pomegranates to your shopping list:

1. Pomegranates are good for you

The pomegranate is known as a superfood. Its jewel-like seeds (arils) have been used for medicinal purposes for millennia. Packed with powerful antioxidants and vitamins, this ruby-red fruit has been shown to be a cure-all for just about any ailment. It helps stomach upsets, menopausal hot flashes, hemorrhoids, conjunctivitis, osteoarthritis, lowers blood pressure, stimulates the immune system, wards off the flu, reduces inflammation, reduces risk of heart disease and lowers cholesterol.

“The peel is good for the heart and blood vessels; the white membrane is good for stopping diarrhea and good for wounds and ulcers of the mouth and throat. The fruit also strengthens the brain, cleanses the body and blood from toxins, and is very good at expelling worms from the intestines,” Merav Altman-Adler, who practices classic Chinese medicine, tells ISRAEL21c. 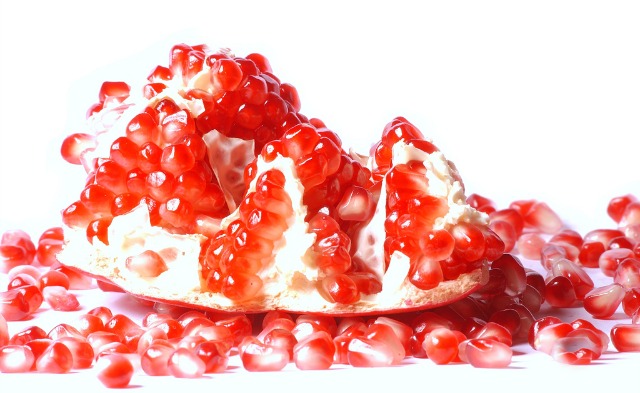 Pomegranate seeds are beautiful and healthful.

“The most important new issue is the cardiovascular protection of pomegranate,” says Prof. Michael Aviram, head of the Lipid Research Laboratory of Haifa’s Rambam Medical Center and one of Israel’s top pomegranate researchers.

Pomegranate juice packs a high antioxidant potency punch and protects against heart attack and stroke. According to new research coming out of Aviram’s lab and an article he co-authored in Rambam Maimonides Medical Journal in April 2013, this royal red juice has an even higher concentration of antioxidants than other sources of dietary antioxidants such as red wine, grape juice, blueberry juice, cranberry juice and green tea.

A Technion-Israel Institute of Technology study led by Aviram showed that the antioxidants found in pomegranate juice may be especially beneficial to diabetes patients. Researchers found that drinking pomegranate juice reduced the uptake of oxidized “bad” LDL cholesterol by immune cells, which is a major contributing factor to atherosclerosis.

“Pomegranate at low dosages is also good for diabetics as the pomegranate sugar is not free (and harmful) but it is attached to the pomegranate’s unique phenolic antioxidants,” Aviram tells ISRAEL21c.

Two other recent studies by British and American researchers show that components in pomegranate juice help prevent prostate cancer metastasis. But Aviram warns that while the fruit juice is beneficial, “Pomegranate is not a magic bullet” in curing diseases.

The Rimon Winery in Israel is one of the world’s top producers of this crimson dessert wine. Father-and-son duo Gabi and Avi Nahmias, from Moshav Kerem Ben Zimra in the Upper Galilee, developed a new strain of pomegranate for winemaking. In 2003, they produced just 2,000 bottles of pomegranate wine to test the market. Today, they ship more than 720,000 bottles across the globe.

5. There are different pomegranate varieties

Israelis have innovated different varieties of pomegranates. Some are sweeter; others keep longer. According to the Agricultural Ministry, this year’s crop is expected to yield some 60,000 tons of fruit. Of that, 14,000 tons of pomegranates will be used by the domestic market and the rest will be exported, mostly to Europe.

Ben-Gurion University of the Negev horticultural researchers have introduced three types of pomegranates to the market. Prof. Ze’ev Wiesman of the plant oil biotechnology lab led the team that improved the genetic makeup of the new pomegranates — Narda, Rotem and Nitzan. Wiesman says they taste better, are more vivid in color, and ripen earlier – as was the case this season, when Israeli pomegranates hit the global market in July 2013, three weeks earlier than usual.

6. Peeling pomegranates can be stain-free

Two Israeli companies have found revolutionary ways of extracting the fruit’s seeds and oils so they can be used commercially in food, cosmetics and pharmaceuticals.

Juran Technologies of Rishon Lezion uses its ArilSystem to extract a whopping 600-1,800 kilograms of pomegranate seeds in just one hour. The ArilSystem can also remove the tough peel and inner membranes of the fruit, important for the beverage industry since the tannins in pomegranate membranes add a bitter taste to the juice.

“Pomegranate is an evolving product worldwide,” Juran CEO and Marketing Director Avner Galili, told ISRAEL21c in an earlier interview. “We believe the only way to keep the pomegranate sector profitable is by industrializing it — fresh-cutting, juicing, drying and freezing.” 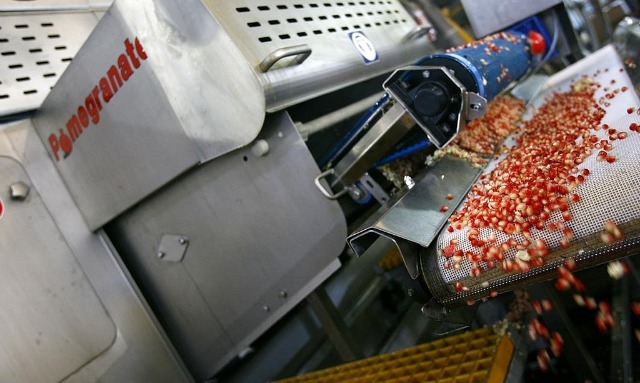 Chinese herbology cites pomegranate juice as a longevity treatment. And thanks to the pomegranate’s antioxidant extracts, modern science and the cosmetics industry agree that topical application of products containing the ruby red fruit can keep wrinkles at bay. Pomegranate-tinged anti-aging creams, massage oils, masques and toners are readily available.

Shavit – an Israeli company specializing in all-natural beauty products – produces a line of pomegranate-infused products that are exported around the world. “Pomegranate oil is a rich source of punicic acid and this is a very strong antioxidant that helps fight wrinkles,” Aliza Shavit, a pharmacist by training and co-founder of the company, tells ISRAEL21c.

Punicic acid is a rare omega-5 conjugated fatty acid that has been shown to improve skin tone and elasticity. “Every day our faces are exposed to harmful sun rays and pollutants,” Shavit says. “The pomegranate extracts help keep the skin healthy.”

Rimonest – a company funded by the Technion and led by head researcher Dr. Ephraim Lansky has also developed a line of products for the functional food, functional beverage, nutraceutical, pharmaceutical and cosmetics sectors. 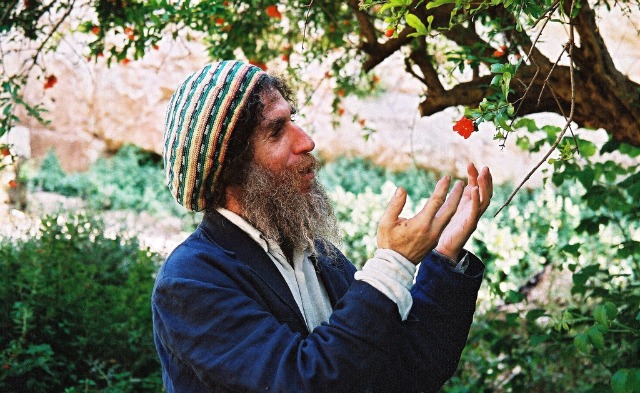 8. Pomegranates are packed with religious history and symbolism

The pomegranate has enjoyed celebrity status for millennia. Widely believed to have originated in Persia (modern-day Iran), the fruit is mentioned in ancient Babylonian texts, the Bible, the Homeric Hymns and the Quran. Pomegranates appear in Greek mythology, Egyptian papyrus, Tang Dynasty characters, and ancient Armenian texts.

The Greeks called pomegranates the “fruit of the dead,” relating to the story of Hades tricking Persephone into eating its seeds in order to keep her as his wife. Ancient Egyptians saw the pomegranate as a symbol of prosperity and ambition. In Judaism, it symbolizes fruitfulness, and in Hinduism it represents prosperity and fertility. 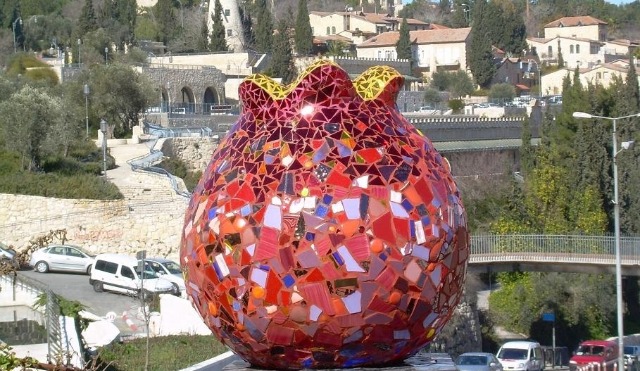 The pomegranate figures prominently in Israeli artworks, such as this mosaic in Jerusalem by Ruslan Sergeev.

Pomegranates are a favorite theme in visual and literary arts.

King Solomon, in the Song of Songs, cites the fruit in one of the most famous love poems: “Thy lips are like a thread of scarlet, and thy speech is comely: thy temples are like a piece of a pomegranate within thy locks.”

Thanks to their all-religions symbolism, pomegranates can be found in artworks throughout the centuries. Famous paintings include Early Renaissance Italian painter Sandro Botticelli’s Madonna of the Pomegranate (ca. 148) and French painter William-Adolphe Bouquereau’s Girl with a Pomegranate, 1875.

Want a modern take on pomegranates? Stop by any of Israel’s crafts markets and you’ll be inundated with pomegranate-themed ceramics, woodwork, clay, photography and drawings.

Pomegranates would hardly enjoy such celebrity status if they tasted as bitter as their peel. But crack open this pink-red-purplish fruit and dig in. A bit tart but sweet too, pomegranates are a tasty and nutritious snack.

And if you’re not a fan of purple-tinged fingers, you can always stop by a fresh juice stand or order pomegranate ice cream. Enjoy!