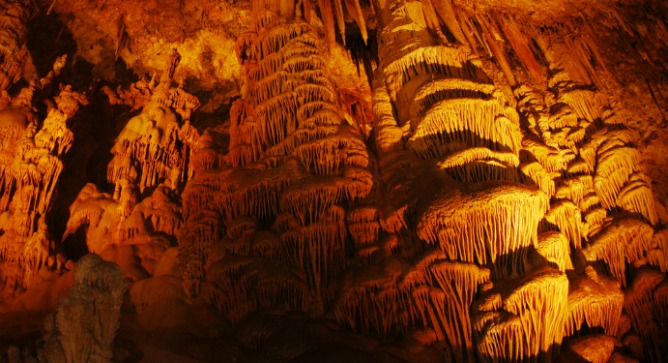 It’s nearly impossible to count Israel’s caves because new ones are discovered every day, says Prof. Amos Frumkin, director of the Cave Research Unit at the Hebrew University of Jerusalem’s geography department.

“Right now we have about 1,200 registered caves in our database, but I can estimate roughly that there are many thousands,” he tells ISRAEL21c.

Most of the caves are formed by rainwater infiltrating underground and dissolving the soluble rock that is plentiful in Israel. Others were created by people carving out spaces for quarries, living quarters, industry, burial, hiding or other reasons, says Frumkin.

Many of Israeli caves are closed to the public, but others are visitor-friendly. Here are 10 of the coolest caves in Israel that you can explore this summer when the scorching temperatures get too much for you.

Also called the Stalactite Cave, this small cavern is in a nature reserve on the western slopes of the Judean mountains between Jerusalem and Beit Shemesh.

Workers blasting at a limestone quarry 44 years ago came across it by accident. Inside were stalactites and stalagmites up to 13 feet long. Some of them are believed to be at least 300,000 years old, while others are still forming.

The Israel Nature and Parks Authority installed wooden walkways, lighting and handrails inside the cave and offers an audiovisual presentation and guided tour. 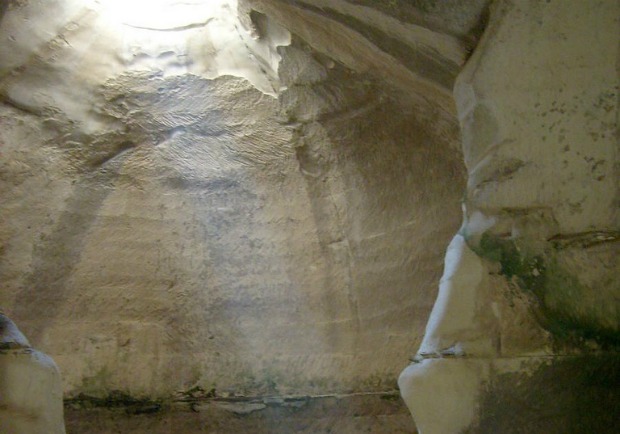 One section of the Bell Cave. Photo courtesy of Wikimedia Commons.

One of many caves to explore at Beit Guvrin-Maresha National Park — which lies in the “land of a thousand caves” region of central to southern Israel – the Bell Cave complex is a series of 70 large caves connected by passageways. The tallest of the Bell Caves are more than 16 feet high.

Dug out as quarries during the Early Arab period in the seventh-11th centuries CE, the caves got their name because the digging was done in the shape of a bell. Arabic inscriptions and crosses can still be seen on the walls. Even Hollywood finds the area awesome; Sylvester Stallone’s Rambo III was filmed here.

The largest cave in Israel and the largest salt cave in the world, Malcham is one of more than 100 salt-rock caves in Mount Sedom at the southwest end of the Dead Sea. Open free to the public, this rare formation has huge rooms, vertical shafts over 426 feet deep, stalactites and stalagmites made of salt.

“It’s a river cave,” explains Frumkin. “Water flowing in a surface stream flows underground and dissolves the salt, creating caves – a process that is still going on when there is strong rain over the mountain about once a year.” 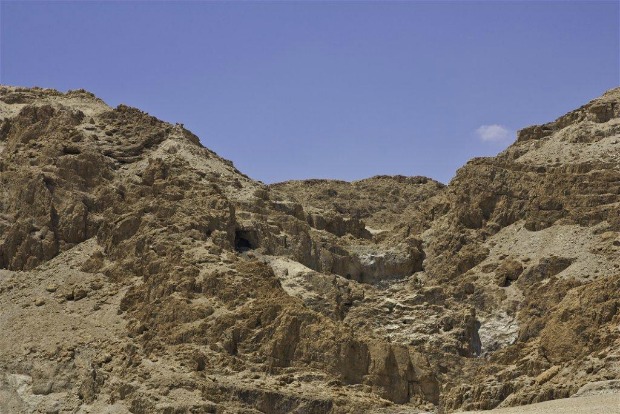 In the year 68 CE, a Jewish cult occupying these caves overlooking the northwest end of the Dead Sea fled from the invading Romans. But first they hid their treasures in clay jars. They were only discovered starting in 1947, and became known as the Dead Sea Scrolls. The parchments – including the oldest known Bible — can be seen at the Israel Museum’s Shrine of the Book or online.

The caves are now a tourist site complete with a video presentation. You can walk through a room where ancient scribes may have worked and an area where the caves’ ascetic inhabitants dried dates and made clay pots like the ones used to store the scrolls for two millennia.

Situated in a limestone bluff in the upper Galilee, HaYonim Cave was used as a living space on and off between 250,000 and 12,000 years ago. Excavations have turned up blades, cooking hearths, finished floors and graves.

“This is a good example of a prehistoric natural cave. Such caves could be associated with two types of humans that coexisted in the last Ice Age – Homo sapiens and Neanderthals,” explains Frumkin. “In the Natufian period about 11,000 years ago, people started building small houses, and there are such structures inside the entrance of the cave.”

Visitors can explore part of the cave for free. The archeological excavation area is blocked off. 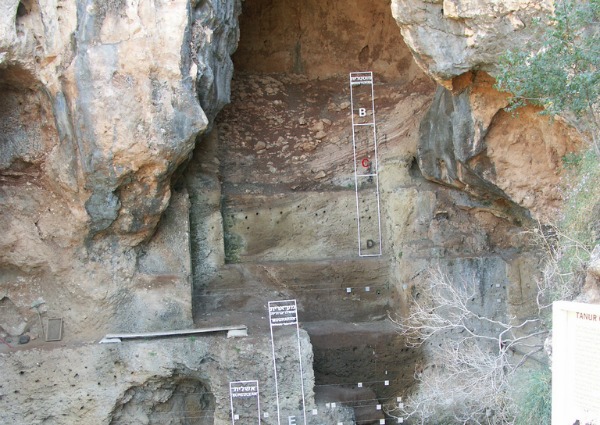 Not far from HaYonim, a 120,000-year-old Neanderthal-type female skeleton was discovered in the Tabun Cave, so named because it resembles a chimney (“oven” is “tanur” in Hebrew and “tabun” in Arabic). Different groups of humans lived inside it from 500,000 to 40,000 years ago.

Tabun is the highest one of three Carmel Caves in the Nahal Me’orot Nature Reserve. Stairs lead from a visitor’s center to the entrance. Archeologists found many hunting and foraging tools here along with piles of fallow deer bones and other leftovers of ancient meals.

This is the largest of the Carmel Caves. Here you can watch an audiovisual presentation about prehistoric daily life, and see a model of a skeleton illustrating burial customs of the Natufian culture 10,000 years ago. More than 100 ancient skeletons were discovered buried here in a tightly flexed position, some with ornaments made of stone, bone or shell. (Don’t worry: The bodies were long since removed from the premises.) 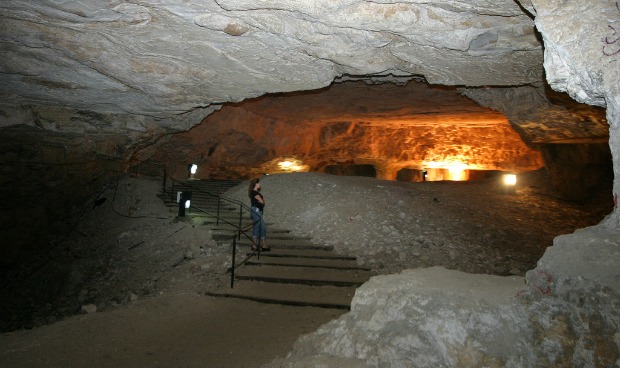 Steeped in legend, Zedekiah’s Cave goes back about 1,000 feet under the northern wall of Jerusalem’s Old City, and more than 2,000 years in history. People long believed that this was the cave described in the bible’s account of how Zedekiah, Jerusalem’s last biblical king, attempted to flee to Jericho during a Babylonian siege. He was captured and tortured, which is why the spring at the back of the cave is called “Zedekiah’s Tears.”

However, the cave has no exit, so it wouldn’t have made a good escape route. Still, it has great significance because archaeologists believe it was from this quarry that workers cut the giant stones to build the Second Temple in the fourth century BCE. The cave is lighted and has signage in Hebrew, Arabic and English. About half of its length is open to the public. 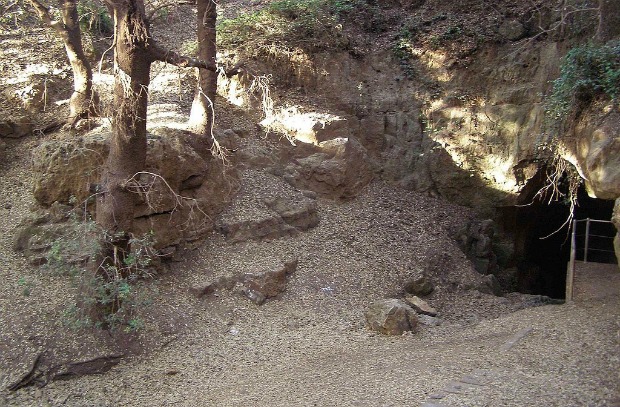 This limestone sinkhole in the Upper Galilee was formed by water flowing from the surface Pa’ar Stream to the underground.

“This is maybe the best example of such a limestone phenomenon in Israel,” says Frumkin. “In winter you can follow the water with your eye and see it sinking underground. It’s in a nice [3.5-acre] nature reserve open to the public for free. Just be prepared for mud because it’s an active cave.”

Israel’s largest limestone cave is shaped like a labyrinth, necessitating a guide from the nearby field school, lanterns and appropriate shoes. It’s located near Bethlehem and Herodion south of Jerusalem, near the town of Tekoa. According to ancient historian Josephus Flavius, Hariton was part of an underground system of escape routes used by Jews fleeing the Romans more than 2,000 years ago.

UNCOVER ISRAEL - Get the ISRAEL21c
Weekly Edition free by email
Sign Up Now!
Bring Israel's story to life.
Millions of people around the world rely on us to gain a deeper understanding of Israel. We are the trusted source for original content you won't find anywhere else.
You can make a difference. Donate today to support journalism that brings Israel’s story alive.
SUPPORT ISRAEL21c
Read more on:   history, Qumran, caves, Galilee, Travel, Summer in Israel