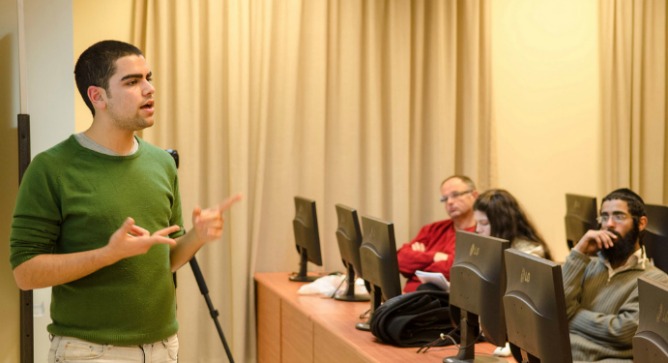 Tomer Hen at his Mobile Marketing College. Photo by Or Kaplan

“Do Israelis have cell phones?” Teens in Ohio asked this question of Tomer Hen, when he was visiting the United States as a junior ambassador during high school. They sure asked the right guy.

Tomer, now 19, is one of the world’s foremost experts in exploiting the marketing potential of mobile devices. His multimillion-dollar Tomer Hen Mobile Marketing Consulting grew out of playing around with his smartphone during 10th grade in Netanya.

He and his friends were using their phones to look up train schedules and find the nearest pizza shop — but unlike on the Internet, search results rarely came along with advertisements.

“I saw that more and more people were using their phones to access products and services, but there weren’t many ads on smartphones,” he tells ISRAEL21c. “This was an untapped market and the prices were extremely cheap.”

Tomer, already an experienced eBay trader at 13, used NIS 12,000 of his bar mitzvah gift money to join an affiliate network (an intermediary between publishers and merchants) and place mobile ads for insurance companies, dating sites and hotel booking sites.

“I lost a lot of money, but I learned a lot. I learned about the market in Azerbaijan, in Germany — all over the world,” he says. “Once I realized the right way to do it, what the audience is looking for, I started making money.”

At first he was pocketing a mere $50 a month. Half a year later, that amount increased to $500 and then grew to $5,000. The income was not only from mobile affiliate and business mobile marketing but also from teaching others his secrets.

“It was amazing. People heard about what I was doing and wanted to learn how. So at age 15, I was charging 70 shekel [about $20] per hour for coaching.”

Before long his fee had increased to NIS 600 ($165) an hour. Just shy of 16, Tomer founded Mobile Marketing College.

His first workshop attracted 120 people. Everyone from hair salon owners to insurance executives wanted to know how to make their advertising budget work on mobile.

“I don’t have to sell them on the beauty of mobile because they’re all using it themselves,” he says. “Once you see how it can help your business, it becomes addictive.”

The field is worth an estimated $60 billion a year worldwide, and is expanding rapidly. Tomer had made his first million before graduating high school.

His fame has spread way beyond Israel. “A few months ago, Alec Ross, senior innovation adviser to the [US] State Department, came over to Israel, and wanted to meet a few entrepreneurs and innovators who can use technology and innovation in order to solve some of the world’s biggest problems,” he says. “I had the honor to meet him with 14 other entrepreneurs in Tel Aviv for dinner, and discuss an optional collaboration.”

Working out of a Tel Aviv office, Tomer began offering a weekly workshop that has so far trained 3,000 people. He grooms overseas clients, primarily in North America, via videoconferencing.

“My success is just having the courage to do things,” says Tomer, whose parents fully support his unconventional path in life.

“I’ve put up campaigns in Congo, the UAE, Iran … and I want to be a master of South American markets, so I’m learning the carriers and mobile operators there,” he says.

He gets down to the detail level, such as what Colombians like about mobile gaming.

Until last year, he worked solo. Now he employs a staff of 13 – mainly former clients, ranging from 21-year-old novices to 40-something ad execs with master’s degrees. He never took a management course and he is younger than all his employees, but he reports that people are eager to work for him.

Running a successful global business at 19. Photo by Or Kaplan

“What is amazing is that they come to me and I say, ‘You know you’ll get less pay here than in the biggest ad agency in Israel,’ and they say, ‘I want to learn from you.’ And I just don’t get it. I learn from them.”

‘I know what I am worth’

Tomer was always looking to fill consumer needs. In fifth grade, he started his own newspaper, printing it at home and selling it to classmates for one shekel. Later he operated a drink stand at a festival in his hometown of Netanya.

“Just last week I drove to the north and there were 30 kilometers with no gas stations,” he relates. So he started researching how to open a gas station.

He is also community-minded. Though he is exempt from military service because of a chronic back condition, Tomer is interviewing for a National Service volunteer position for next year.

And he talks about wanting to use his skills to improve lives in Africa, where mobile marketing is more common than Internet marketing.

He has many business competitors in Israel and elsewhere, but he says he is not afraid of competition and has stopped worrying whether others will steal his material. “I know what I am worth,” says Hen, with a confidence few other teenagers possess.

While still in high school, he participated in ambassador programs to Cincinnati, Ohio, where his delegation spoke to 500 non-Jewish peers about life in Israel; and to Germany, where the young Israelis befriended Christian teens and even stayed at each other’s homes for a week. He takes pride in educating people about the real Israel.

For those who are still wondering, statistics show that per capita, Israeli use of mobile phones is much higher than in the United States or United Kingdom. And 94% of Israeli high school students admit to using their phones in class. So it makes sense that the guru of mobile marketing is an Israeli teen.

UNCOVER ISRAEL - Get the ISRAEL21c
Weekly Edition free by email
Sign Up Now!
Bring Israel's story to life.
Millions of people around the world rely on us to gain a deeper understanding of Israel. We are the trusted source for original content you won't find anywhere else.
You can make a difference. Donate today to support journalism that brings Israel’s story alive.
SUPPORT ISRAEL21c
Read more on:   People, Tomer Hen, Mobile