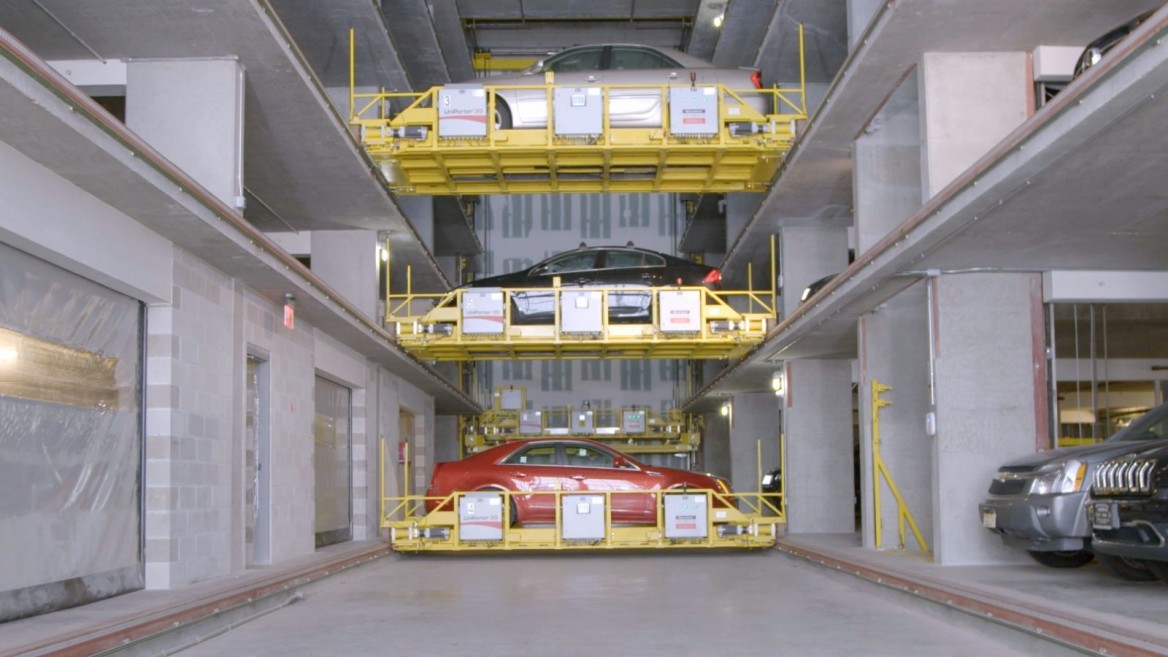 Conventional parking garages are an environmental failure, taking up lots of land and resources to build and maintain, not to mention the gasoline wasted as waiting cars idle and then troll for a vacant spot and maneuver into and out of it.

Unitronics Group reimagined the whole scenario to look like this: Drive your car into a 20-by-20 foot entry bay, turn off the engine, lock up, take a ticket and go on your way. The rest of the process is fully automated.

After you leave the bay, a Unitronics robot scoots under the car, engages the wheels and lifts the vehicle using a combination of radar, optical sensors and cameras. It transports your car to the destination spot and positions it perfectly with no chance of a fender scrape or space-hogging poor parking. 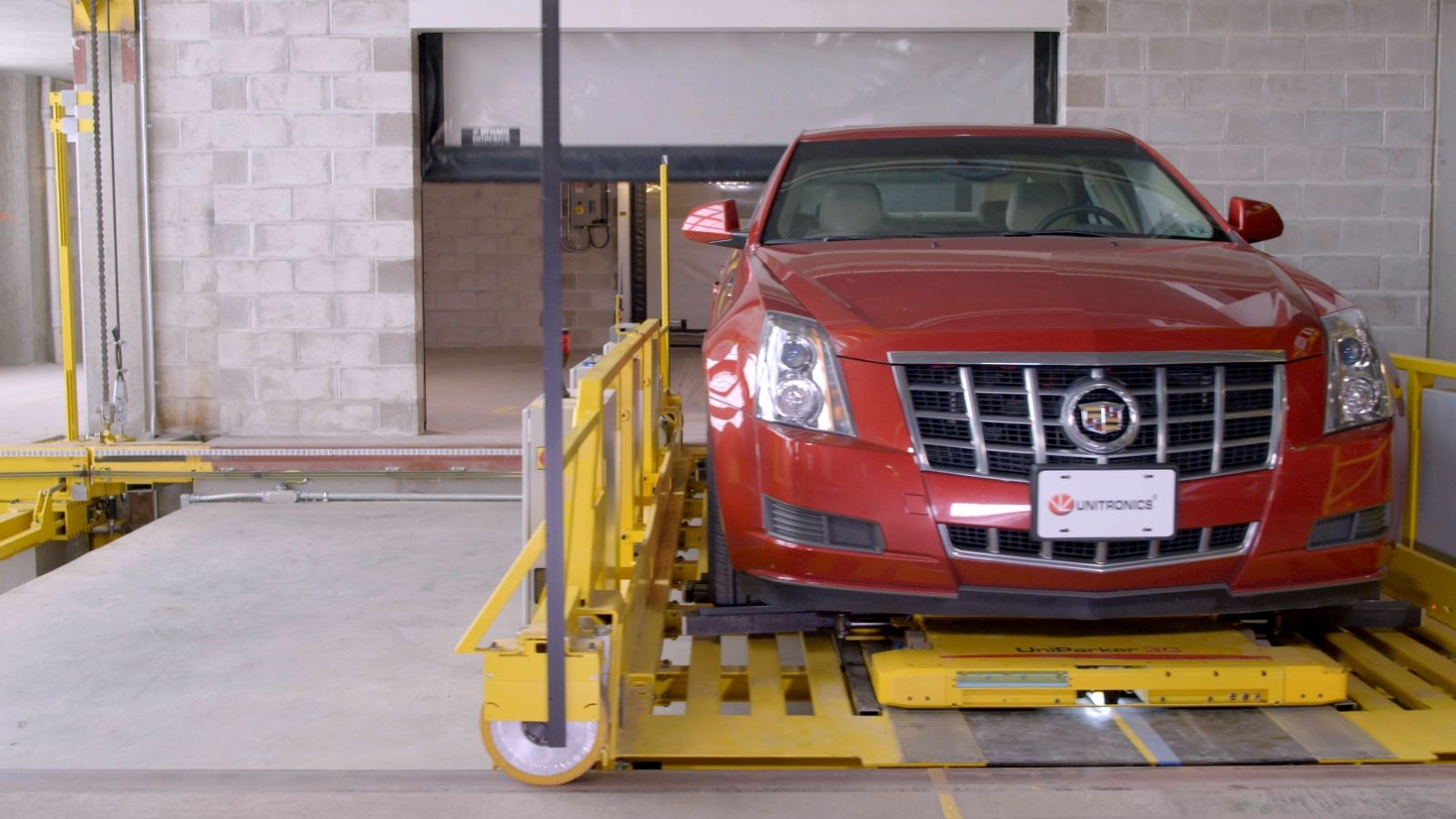 The robots use automated elevators to bring cars to available spots. Photo: courtesy

To activate retrieval, you enter the bay and either pay the fee via computer or (for registered monthly users) swipe a coin-like RF card on your keychain. A computer screen tells you the number of the room in which your car will be waiting, faced outward for quick exit, and shows your vehicle’s progress as one of the robots brings it to the room within two or three minutes.

This is no startup dream.

Established in 1989, Unitronics develops industrial automation products, smart warehouses and automated parking solutions for global clients including Danone and BP in Belgium and Coca-Cola in Holland.

It built 47 projects in Israel and runs an international network of 165 distributors and sales offices in Europe, the United States, Israel and the Far East.

Unitronics’ US subsidiary recently completed four new-generation automated parking garages in the United States – three in Hoboken, New Jersey, and one at City Hall in West Hollywood, California – plus another in Mexico.

The sixth project, a 300-space, $4.5 million carpark, is planned to open in late 2017 in a luxury apartment complex in Cliffside Park, New Jersey. The seventh is expected to be a very large $24 million project in Calgary, Canada, for which Unitronics signed a binding letter of intent and will begin once a building permit is secured. 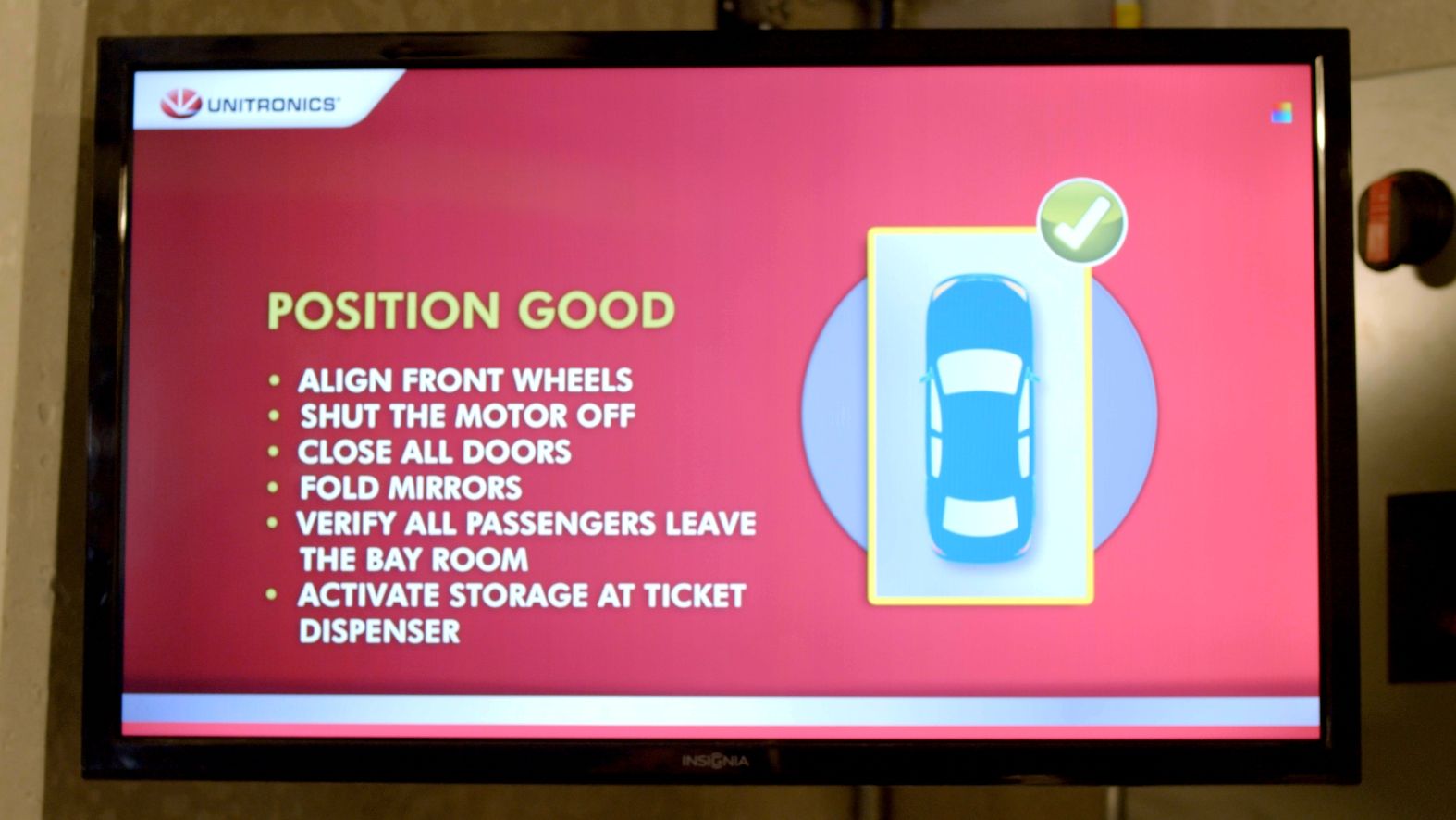 Unitronics founder and CEO Haim Shani tells ISRAEL21c that while mechanical parking is not a new idea, the Israeli solution does not require any devices or systems aside from the robot and offers revolutionary financial and ecological benefits.

“Our solution is unique and can change the whole game. The developer not only enjoys high-density parking but also lower cost,” says Shani.

“It’s a green solution, too,” says Shani. “The car is turned off after the driver leaves it in the entry bay, so there is no waste of fuel and no emissions in the building. Since it’s a robotic system, there is no need for lighting or ventilation inside the parking garage, which consume much more energy than does our robot.” 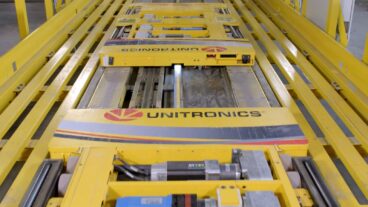 Turn off the engine, lock the door and let Unitronics’ robots do the rest. Photo: courtesy

And finally, the automated, remote-managed system saves on manpower costs. “We don’t actually need any employees at the parking garage but normally one person is on duty during rush hours to serve customers,” says Shani.

The Unitronics Group, based in Airport City, went public in 1999 and is listed on the Brussels and Tel Aviv stock exchanges. Employees number about 250 in Israel and almost 50 in the United States.

“The company is profitable but we expect significant growth so we are raising money through the stock exchange,” says Shani.