Mati Oren with his four medals at the Shanghai Special Olympics World Games in 2007.

Mati Oren with his four medals at the Shanghai Special Olympics World Games in 2007.

Michael Phelps and Ian Thorpe may be more famous than Mati Oren, but at home in Israel, the Special Olympics swimming medalist is a superstar.

“I was sportsman of the year on my kibbutz and honored several times in our regional council,” says Mati, Israel’s most medaled Special Olympics athlete since the country’s 1987 entry in the worldwide competition for athletes with intellectual disabilities.

Soon to turn 32, Mati made history in 2003, when he took home four gold medals from the Summer Games in Dublin and achieved a Special Olympics world record in the 100-meter individual medley.

He is one of 40 Israeli Special Olympians preparing to represent the country at the 2015 Summer Games in Los Angeles. 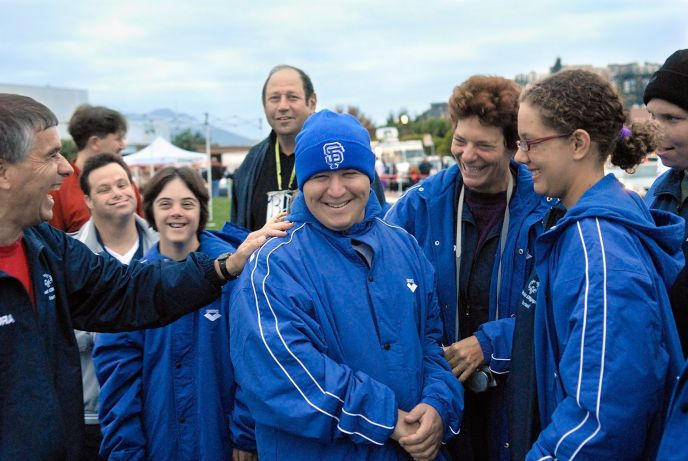 The youngest son of Vicki and Haim Oren of Kibbutz Ginegar near Nazareth, Mati was born with medical problems requiring eight surgeries by the time he was four years old. Though physically healed, he was then diagnosed with developmental and cognitive disabilities. From age five to 21, he attended a special school in Haifa.

“His class would come each year for a party on our kibbutz, and they’d swim in our pool,” Vicki tells ISRAEL21c.

The staff couldn’t help but notice Mati’s prowess in the water. When Mati was 12, the school encouraged the Orens to take their son to a Special Olympics swim meet in Tel Aviv under the auspices of AKIM, a national organization of parents of intellectually disabled children.

“It was like magic,” says Vicki. “It was like a door opening. We met other parents and coaches, and they asked him to join the national team.”

With help from the kibbutz, friends and family, the Orens managed to get Mati to weekly training sessions in the pool at the Wingate Institute, Israel’s National Center for Physical Education and Sport, near Netanya – 90 kilometers from Ginegar.

In 2000, the Orens accompanied Mati to his first European Special Olympics regional competition, held in Holland. He won three golds and one silver medal, and came home to a hero’s welcome by the Ministry of Culture and Sport. 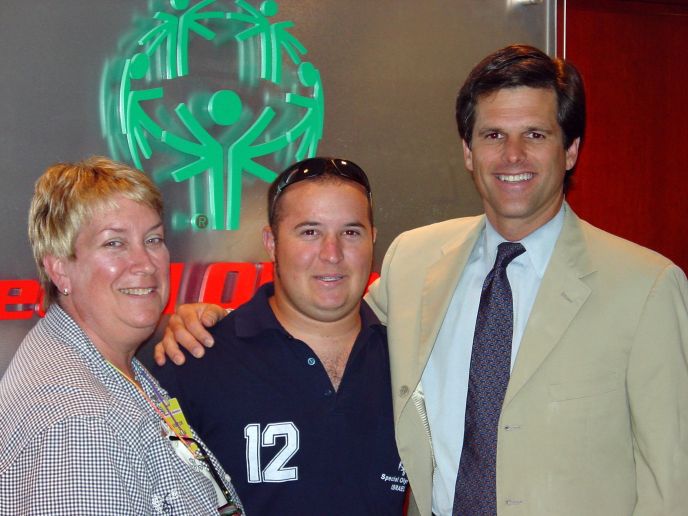 Mati Oren and his mother, Vicki, in Shanghai with Tim Shriver, chairman of the board of Special Olympics International.

“It’s really important for us to be there to cheer on our children,” Vicki says. And because no national flags are flown or national anthems played at the medal ceremonies, flags waved by families in the stands give a boost to the athletes.

Founded in 1968 by Eunice Kennedy Shriver, the Special Olympics organization provides year-round training and competition in Olympic-type sports for four million people age eight and up (about 7,000 are registered in Israel), “giving them continuing opportunities to develop physical fitness, demonstrate courage, experience joy and participate in the sharing of gifts, skills and friendship with their families, other Special Olympics athletes and the community,” according to the mission statement.

Unlike the Paralympics for athletes with physical disabilities held in tandem with the Olympic Games, the Special Olympics run on a separate schedule.

The 2015 Summer Games in Los Angeles will be Mati’s fourth Special Olympic Games, assuming the success of a drive to collect nearly NIS 1 million to bring over the team, alternate athletes, coaches, and security and other support staff. (Families pay their own way if they wish to attend.) The delegation of 40 athletes – ranging in age from 17 to 41 — will compete in pool swimming, open-water swimming, tennis, bowling, kayaking, basketball, cycling, athletics and bocce (lawn bowls). The bowling and kayaking teams are to be “unified,” meaning regular and special athletes will be paired together.

Mati no longer trains with special athletes but with masters and triathlon swimmers under the Israel Swimming Association’s national open-water coach, Andrei Tot.

“Open water is a new sport in the Special Olympics, and Mati switched from pool swimming to open water because he wanted a new challenge,” says Vicki. Despite the cold this time of year, he hates to get out of the water.

“Swimming is part of who I am,” Mati declares. At the 2007 Summer Games in Shanghai, Mati again won three golds and one silver medal. He won silver and bronze medals at the 2011 Athens Games in open-water swim, and last year placed sixth in the top division for open-water swimmers at the European regionals. He was named Israeli Athlete of the Decade in 2008 by the Ministry of Culture and Sport.

Since finishing his schooling at age 21, Mati has worked in the kibbutz’s plastics factory, and two years ago became a certified lifeguard. He lifeguards at Ginegar’s pool in afternoons, evenings and weekends, and also plays soccer and cycles when he has the time.

Mati says that going to the LA Games would be a dream come true. “I also want to do a triathlon team with me as the swimming link,” he says. “I plan to swim forever.”

“It is very important that we consider our athletes as normal athletes and they feel like normal athletes,” Astrachan tells ISRAEL21c. “There’s nothing different than in regular sports; they have to practice a lot, compete a lot, and come with the spirit of competition. But the most important part for me is to see their smiles and their parents’ smiles.”

UNCOVER ISRAEL - Get the ISRAEL21c
Weekly Edition free by email
Sign Up Now!
Bring Israel's story to life.
Millions of people around the world rely on us to gain a deeper understanding of Israel. We are the trusted source for original content you won't find anywhere else.
You can make a difference. Donate today to support journalism that brings Israel’s story alive.
SUPPORT ISRAEL21c
Read more on:   special athletes, Special Olympics Israel, Mati Oren, Special Olympics, Profiles, Sports, Culture, Olympic Games