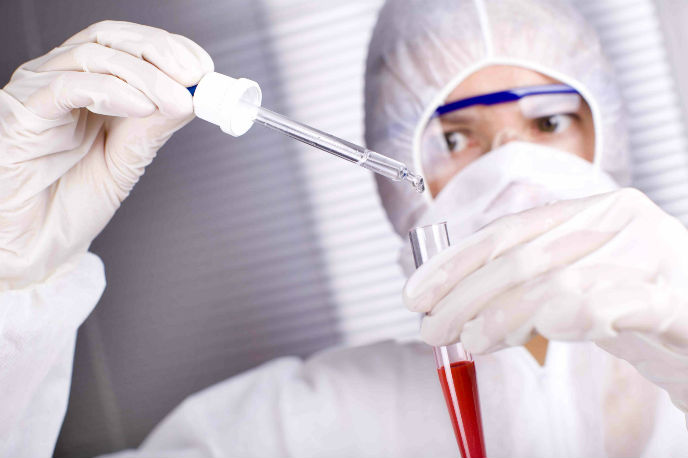 An American NGO has approached Argaman about purchasing masks and gloves for healthcare workers dealing with Ebola patients. Image via www.shutterstock.com

An American NGO has approached Argaman about purchasing masks and gloves for healthcare workers dealing with Ebola patients. Image via www.shutterstock.com

Jeff Gabbay ignites the end of a foot-long cotton fiber tuft with a cigarette lighter, and the entire tuft is ablaze in an instant. When the lighter touches the same length of fiber impregnated with a natural fire retardant invented at his Argaman Technologies, the flame stops dead in its tracks.

The new multifunctional textiles aren’t only fireproof. They can be made into “bio-inhibitive” bedding, shirts, socks and underwear that permanently self-sterilize against the bacteria that ordinarily make for smelly laundry, and even inactivate viruses that might penetrate the fabric. 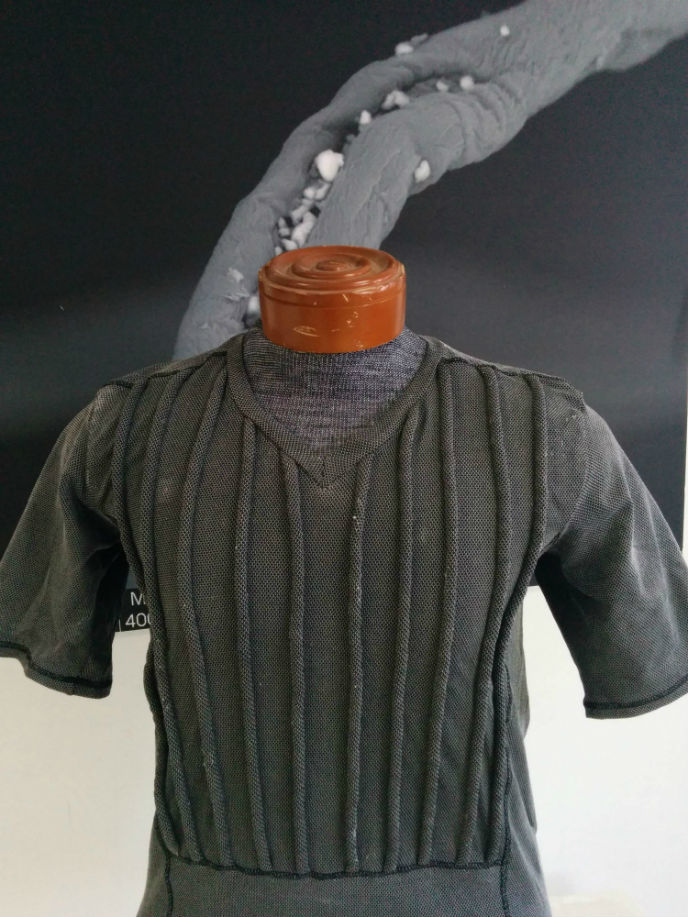 A sample shirt developed by Argaman for the Japanese police and for racecar drivers. It controls core body temperature to reduce heart stress; can deliver active ingredients to sterilize a wound and promote healing; has “weltings” to keep a bulletproof vest off the body to allow air circulation; and is fire retardant.

In an exclusive interview with ISRAEL21c, the Argaman CEO/CTO reveals that NASA and the US Army Special Forces are testing garments made with the Jerusalem-based company’s proprietary technology platform.

However, Gabbay says his innovation motivation isn’t driven by spaceships but by his wish to save lives and spare the misery of millions of patients plagued by hospital-acquired infections and bedsores. 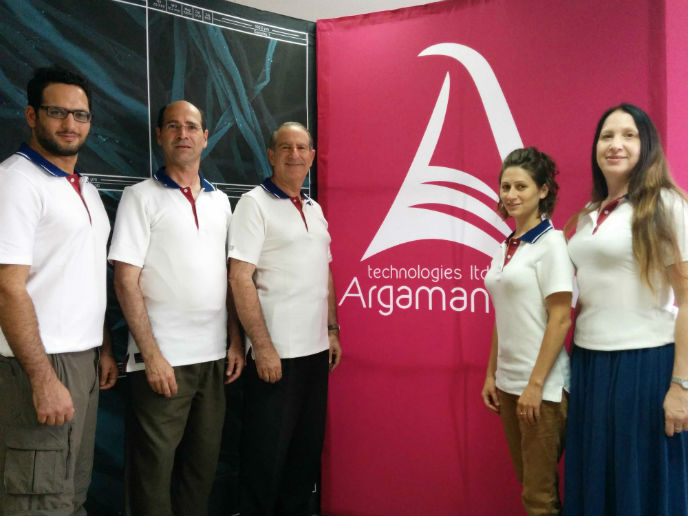 According to the World Health Organization, seven of every 100 hospitalized patients in developed countries (and 10 in every 100 in developing countries) acquire at least one healthcare-associated infection, leading to significant mortality.

Last year, Reuth Medical Center in Tel Aviv became the first in the world to incorporate Cupron technology into all surfaces and textiles in one of its patient units. Studies show this technology reduces hospital-acquired infections by 24 percent.

Gabbay subsequently sold Cupron – which is still going strong — and in 2013 founded Argaman (a biblical Hebrew word for “crimson”) with Simcha Edell as his partner and chief financial officer.

This technique causes a permanent mechanical bond that will never wash out or decrease in effectiveness. (An environmental bonus: The process recycles 100% of the water and chemistry used.)

The lifesaving potential is paramount, but the monetary savings may be a bigger selling point. 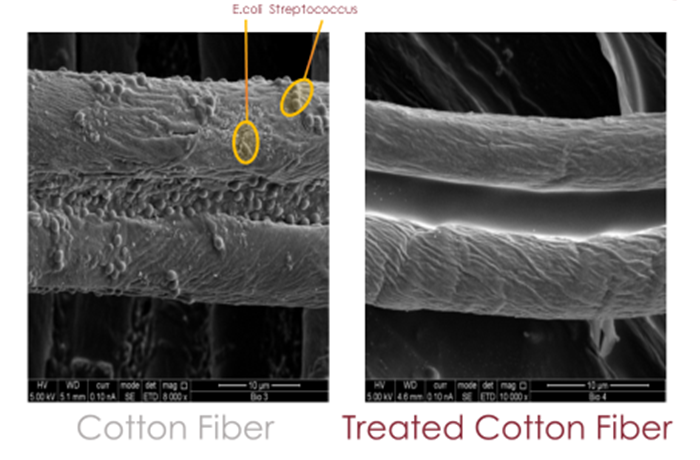 “With these new textiles, we can reduce infection rates and bring down the cost of patient care significantly – by 27%, according to hospital tests in Israel,” says Gabbay. “I’m willing to give every hospital these fabrics for free. Just give me back half the money you save on antibiotics and patient care.”

Argaman unveiled its technology publicly for the first time at the TechTextil North America Show last May in Atlanta.

“We’ve had some very serious inquiries for certain products from large international companies,” says Gabbay. He recently provided samples of bio-inhibitive socks to one of the largest foot-care companies in the world.

“Our short-term goal is to market the socks as a medical device to cure athlete’s foot. The longer-term goal is prove that they also close diabetic foot ulcers and will allow diabetics to keep their toes on their feet. We will go through the regulatory process to make those claims.”

An even more ambitious goal is to market virus-vanquishing fabrics. With Ebola continuing to rampage out of control in Africa, a fabric like this could be life-saving. “Everybody touching Ebola should be outfitted with our highly anti-viral fabric from head to toe,” declares Gabbay.

Though Argaman doesn’t yet have test data to prove its fabrics deactivate Ebola, already published evidence on copper-oxide impregnated fabrics is strong enough that an American NGO has approached Argaman about purchasing masks and gloves for healthcare workers dealing with Ebola patients. Gabbay says he has enough treated fabric in stock to make about a million masks.

He hopes the textiles will also be employed against frightening viruses such as the H5N1 “chicken virus,” MERS (Middle East Respiratory Syndrome) virus and even the coronavirus that causes the common cold.

The same technology can be put into garments that squelch dust mites, mosquitoes and ticks. “Imagine the lives you could save from malaria,” Edell says.

Not just for astronauts

NASA’s order of 36 shirts to test in outer space stems from its interest in keeping astronauts healthy and comfortable during months-long space missions.

“When astronauts enter outer space, muscular atrophy and bone thinning begin immediately,” explains Gabbay. “To reduce these effects, they must do high-level aerobics at least two hours a day. You want to control their core body temperature as they do these aerobics, and you want their clothing to stay dry and odor-free because they can’t do laundry in space. That’s what you get with our shirts.”

Another coming product is self-sterilizing, hypoallergenic cotton damask and sateen for use in luxury hotels. But the sky is the limit; one day, Argaman’s fabrics might deliver transdermal medications and chemotherapy, says Gabbay.

The 11-person company is setting up a beta production site and plans to produce knit fabrics in Israel. Woven fabrics will be made by China’s largest textile manufacturer using a “chemical pellet” containing Argaman’s technology. Chinese investment in Argaman is likely, but Gabbay pledges that the technology will remain in Israel.

The CEO doesn’t claim that Argaman has no competitors. “I do not ever seek to be alone in a market and I’m never afraid of competition. The issue is how you compare to your competition. We have a superior product with better technology, better quality and fewer environmental concerns,” Gabbay asserts.

“This is one of those rare opportunities in life that, if you handle it correctly, just think of all the good we can do.”