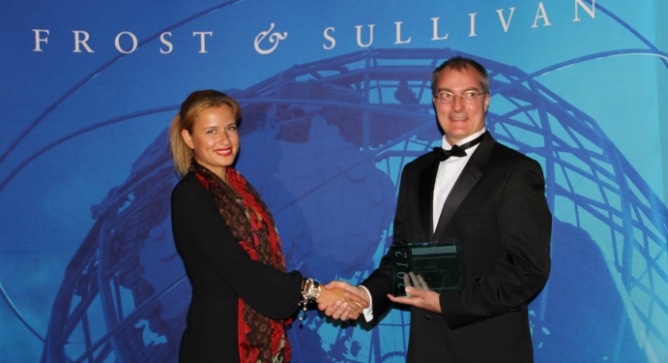 Braverman was nominated as “Young Sustainability Executive of the Year” in the 2013 Business Green Leaders Awards.

It was a twist of fate that not only introduced Inna Braverman to a passion for green energy, but reconnected her to Ukraine, where she spent the first four years of her life.

Braverman, 27, is the co-founder and marketing director of Eco Wave Power (EWP), an Israel-based company whose innovation in wave technology for the production of electricity has catapulted it to the top tier in the field worldwide.

And it is Braverman’s key role in the endeavor that led to her nomination as “Young Sustainability Executive of the Year” in the 2013 Business Green Leaders Awards, to be held in London on July 3.

So what was it that led a young woman with a BA in English literature and political science from the University of Haifa to immerse herself in the power of water movement?

After what Braverman calls a “shocking experience” as a participant in the Israeli reality show Big Brother (“You suddenly find yourself locked in a house with complete strangers, and when you finally leave the show, you have to deal with a totally new status, because while you weren’t watching TV, everybody in the country was watching you”), she found work as a Hebrew-English translator for SDE Energy, manufacturer and marketer of Sea Wave power plants. Though the job wasn’t a good fit for her, it introduced her to the field of wave energy.

“Whereas solar and wind have been understood to create clean, cost-effective energy – and as a result have broken into public consciousness and the market – waves are a relatively untapped resource,” she tells ISRAEL21c.

After quitting her job at SDE, she met entrepreneur and inventor David Leb, a Canadian Jew who owns a surfing, scuba diving and fishing camp in Panama, but who frequents Israel regularly.

“Watching the force that propels surfers gave him some ideas for a better system of utilizing its power than already existed on the market,” recounts Braverman in her Tel Aviv office. “He wanted to make green energy and green money – and make it cheap for consumers in the process.”

Capturing energy of the wave’s curve

So far, it has been paying off, with Leb’s invention patent pending in Israel and soon to receive an international patent, as well.

Part of the innovation, Braverman explains, “is in the design of the floaters that were being used to channel wave energy.” These work through a system of buoys that rise and fall with the movement of waves. The buoys are attached to hydraulic pumps that “push” the energy into a system that converts the energy from this motion into fluid pressure, which is used to spin a generator, producing electricity, and then transmits the electricity to a grid.

The conventional devices that had been in use since the 1940s in Japan (invented by Yoshio Masuda, considered the father of modern wave technology) were equipped with a standard size and shape of buoy. This made it difficult to take full advantage of the energy produced by the wave’s curve – which is the essence of the energy.

“The paradox is that on the one hand, you need large floaters (buoys), because larger volume enables the creation of more energy,” according to Archimedes’ Principle, Braverman explains. “On the other, they have to be light, so as to produce electricity from lower waves as well. It was thus that EWP came to the conclusion that the floaters also have to be shaped in a unique way, to maximize effect.”

Leb and Braverman set out to solve this problem two years ago. Braverman spent a year and a half traveling between her native country and Israel, putting together a research-and-development team in the Ukraine.

This she did by holding a local competition for candidates to propose unique and inexpensive ways of utilizing wave energy.

What has emerged is the start of several breakthroughs in the field. Among these is a new generation of floaters, which are large, yet lightweight and reliable. In addition, EWP came up with eight unique buoy shapes, with the vision of “different floaters for different environments.”

The Wave Clapper and Power Wing generation systems using these buoys not only rise and fall according to wave strength, but also take advantage of the lifting force, change of water level, hydraulic air lock, and incidental flux of waves. The floaters have sensors that monitor the sea environment to detect exactly which kind of waves are on the way.

Another novelty, says Braverman, “is that the device is capable of anticipating storms, which enables a change in the performance of the floaters in such a way as to prevent mechanical damage to the apparatus.”

Initially tested at the Hydro-Mechanical Institute in Kiev, last year the system was successfully installed at two locations in the Black Sea.

The innovation in the system of harvesting wave energy with high-power output levels at an affordable price earned Eco Wave Power the prestigious Frost & Sullivan Award for New Product Innovation in 2012, which was reinforced in 2013.

According to a collaboration agreement with the Chinese government signed during Israeli Prime Minister Benjamin Netanyahu’s visit in mid-May to Beijing, EWP will establish a local branch, Eco Wave China, which will be given factory space of 300 square meters and financial backing for two years.

The agreement will require expanding the staff of nine – four managers and five engineers – that currently handles the whole business.

It is a dream come true for Braverman, whose cheerful demeanor camouflages what she asserts is a case of chronic exhaustion.

“The rewards are enormous,” she insists. “But it takes endless amounts of work and travel, as well as a fair share of hurdles and disappointments.”

This, she claims, “is exactly why you have to absolutely believe in and love what you’re doing.”

Proudly pointing to the blue and white floaters — Eco Wave Power’s salute to the Israeli flag — Braverman smiles brightly at the personal journey that created her career, while helping the environment, the consumer and the state of Israel.

“It’s a win-win-win-win situation,” she concludes.

UNCOVER ISRAEL - Get the ISRAEL21c
Weekly Edition free by email
Sign Up Now!
Bring Israel's story to life.
Millions of people around the world rely on us to gain a deeper understanding of Israel. We are the trusted source for original content you won't find anywhere else.
You can make a difference. Donate today to support journalism that brings Israel’s story alive.
SUPPORT ISRAEL21c
Read more on:   People, Inna Braverman, Eco Wave Power, Environment, Wearable Technology