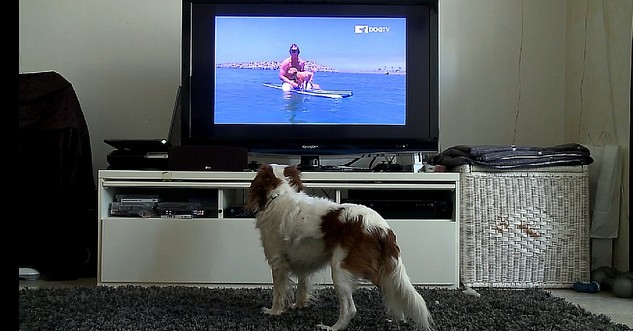 Keeping even more dogs entertained while their owners are gone.

DogTV, the made-in-Israel cable TV channel for dogs, is launching across the United States on August 1 through DirecTV, the largest satellite TV platform in the world, according to founder Ron Levi.

Levi tells ISRAEL21c that the programming will be available 24/7, reaching somewhere between 20 million and 21 million households. Americans share their homes with an estimated 78.2 million pet canines. Many of the dogs are left alone while their owners are at work or school, and this is why DogTV was invented.

“It is a problem that needs to be solved, because dogs are not cool with being alone,” says Levi. “We believe this can be a great solution pretty much everywhere. We’re talking to other countries as well.”

Levi and Dodman have been busy on the US talk-show circuit this summer ahead of the launch. Even Conan O’Brien mentioned DogTV on his late-night program.

Content is constantly being changed and updated, says Levi, and he adds this scoop for ISRAEL21c readers: “We are developing some programming for dog ‘parents’ for the evening hours. We’re in the middle of editing as we speak.”

UNCOVER ISRAEL - Get the ISRAEL21c
Weekly Edition free by email
Sign Up Now!
Bring Israel's story to life.
Millions of people around the world rely on us to gain a deeper understanding of Israel. We are the trusted source for original content you won't find anywhere else.
You can make a difference. Donate today to support journalism that brings Israel’s story alive.
SUPPORT ISRAEL21c
Read more on:   News, dogtv, television, Dogs