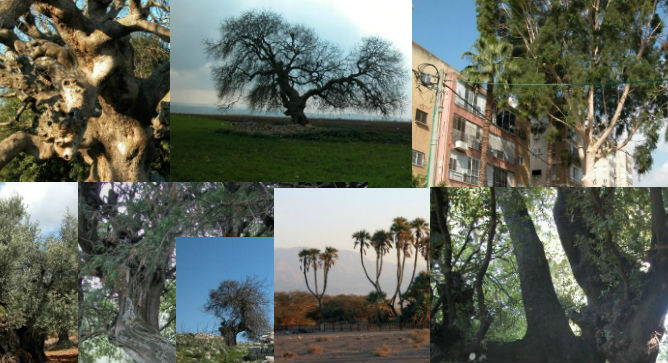 Yaakov Shkolnik really knows trees. He grew up among the apple orchards on Kibbutz Malkiya and worked as a guide for the Society for the Protection of Nature in Israel. Recently he wrote the book on the subject: 101 Special and Amazing Trees in Israel for Keren Kayemeth LeIsrael-Jewish National Fund (KKL-JNF).

For the past eight years, Shkolnik has been mapping, measuring and monitoring Israel’s 200 oldest trees along with Sohil Zidan, KKL-JNF’s olive and fruit grove expert, and chief ecologist Yoram Goldring.

ISRAEL21c asked Shkolnik to choose 10 noteworthy old trees from the book (which is available only in Hebrew) to share with our readers. Here are his picks, along with photographs he took. 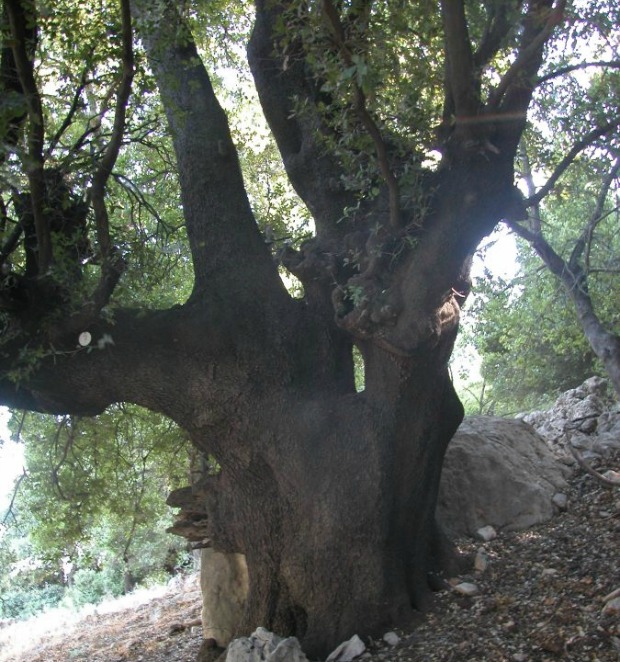 “You can find the common oak in many areas of Israel, but the most special ones grow in Har Habetarim, the traditionally recognized spot where God promised Abraham that his descendants — and that includes the Muslims –would inherit the land,” says Shkolnik.

“These 20 trees are huge. Usually common oak are more like bushes, but these are real trees with very strong trunks of nearly six meters (19.6 feet) in circumference. There is a small building there, Place of Beloved Abraham, where Jews prayed since the 16th century, but today it is difficult to get to because it is a military zone.” “You can’t know exactly how old Israeli trees are because some grow faster or live in better conditions. But the three that grow close to the marked trail from Birket Ram [a volcanic lake on the slope of Mount Hermon] on the way to the ski area in Neve Ativ are, I’m sure, among the oldest trees in Israel.”

Shkolnik says this trio of junipers isn’t so tall, but that is because the very cold winters and very dry summers slow their growth. The good news is that these adverse conditions make the wood of these trees unusually strong and sturdy. This huge tree is situated near Kibbutz Malkiyah, so it’s especially close to Shkolnik’s heart. “About 70 or 80 people can sit under its shade and KKL made picnic tables below it. In winter, when it’s naked, you can see the real beauty of its branches. There are about 30 to 40 others around it, but none as big.” 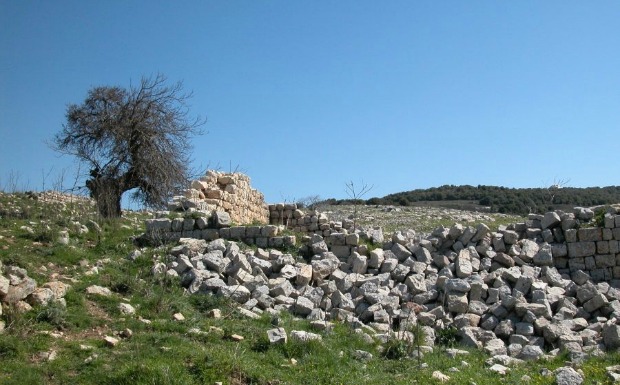 Shkolnik swears this tree bears the most tasty fruit in the world. “It was planted by Rabbi Yisrael Beck in the early 19th century. Among other things, Rabbi Beck had a printing house in Safed and managed to get some land in Mount Meron, and was maybe the first modern Jewish farmer in Israel. You can enjoy this tree’s fantastic fruit in the summertime — it’s in a nature reserve, but it’s okay to pick the fruit.”

“There is one special tree that lives in very old grove on Mount Meron between two Druze villages. On that slope, there is a paved road with many old trees, but this one’s circumference is about seven meters [23 feet], and it still bears fruit!” 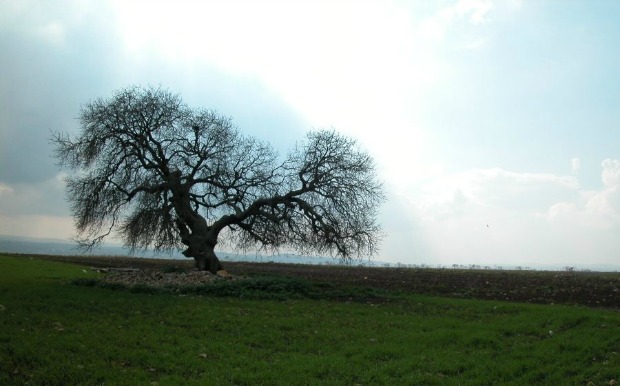 On the northern edge of this cultivated valley is a pile of stones from which this tree grows harmoniously, though it bears no fruit. “In the 1870s, the Palestine Exploration Fund made a survey of Palestine and mentioned this tree. In Arabic it’s called el-Butma, and elderly residents told us that when people wanted to meet to make up after a fight, they’d meet under the shade of this tree.” 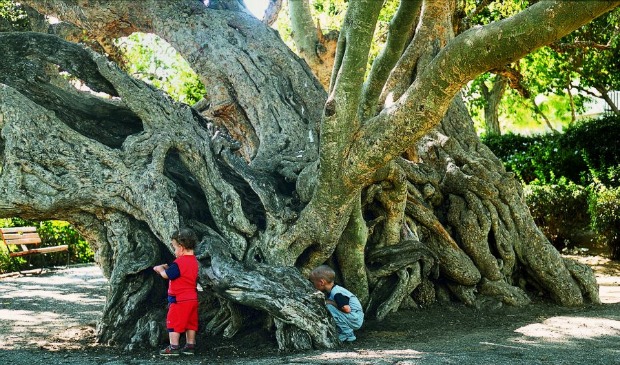 “This very famous tree has a very big circumference of more than 12 meters [39 feet], and it’s become a playground for children. There used to be an inn nearby and people who were walking from Jaffa to the north stopped at this tree. In 1873, an English traveler with the Palestine Exploration Fund, Charles Wilson, wrote Picturesque Palestine and drew a picture of this tree for the book, which was even then big and impressive.”

The city of Netanya commissioned a mosaic to be placed in front of the tree, and surrounded it by a small park. 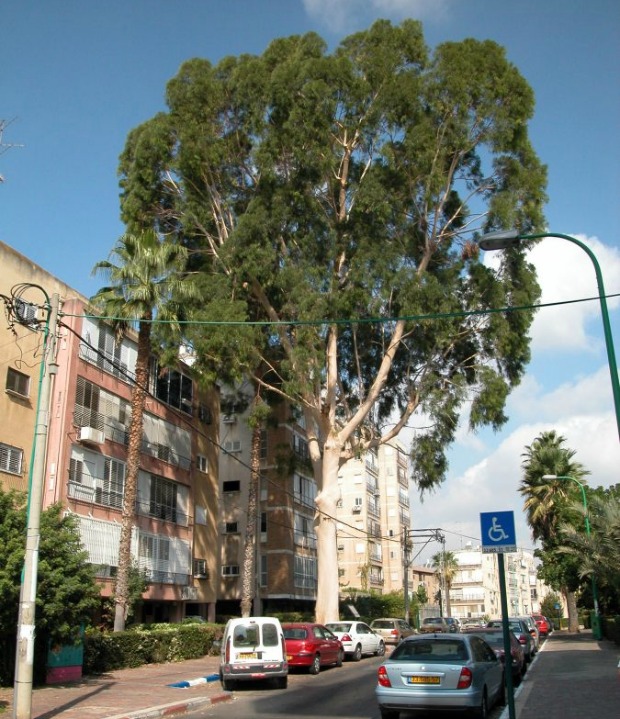 Though Israel boasts many eucalyptus trees, they are not native – they were brought from Australia by the KKL-JNF – and most of them are of the river red variety, Shkolnik explains.

“The lemon-scented gum is very rare here. It has a very smooth, yellowish trunk and the leaves smell like lemon. Two were planted in Petah Tikva in the 19th century, but there was a locust attack and only one was saved. There are two [newer] others in the city not far from Beilinson Hospital.” 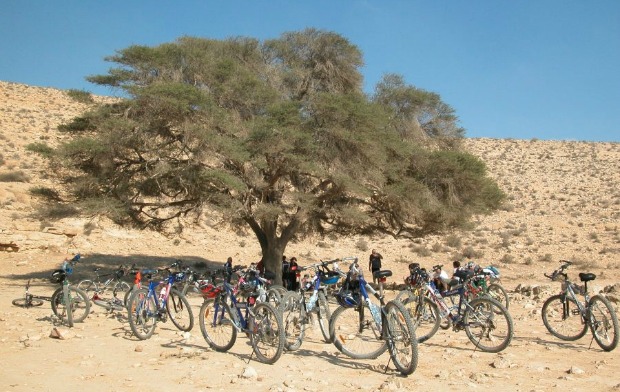 This lonely tree in the middle of the Negev Desert is so huge that it’s like a small oasis. “Many travelers to Sde Boker make plans to picnic under the shade of this tree. It’s in a small wadi whose official name is Nahal Noked, but people call it the ‘Tree Wadi.’ Acacia fruit is important to the desert deer. Strangely, we never saw fruit from this particular tree and we don’t know why.” 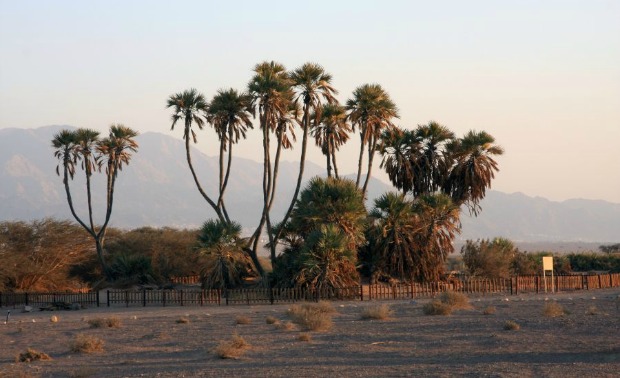 “Doum” is the Arabic name for a palm that grows in rivers in Eastern Africa and produces a type of edible date. The grouping that caught Shkolnik’s eye, growing just north of Eilat in a nature reserve, are the northernmost wild doum palms in the world.

“Each trunk is divided into two and sometimes those two are divided in two also. It’s very unique,” the tree expert says.

UNCOVER ISRAEL - Get the ISRAEL21c
Weekly Edition free by email
Sign Up Now!
Bring Israel's story to life.
Millions of people around the world rely on us to gain a deeper understanding of Israel. We are the trusted source for original content you won't find anywhere else.
You can make a difference. Donate today to support journalism that brings Israel’s story alive.
SUPPORT ISRAEL21c
Read more on:   Travel, Environment, KKL-JNF, Trees in Israel