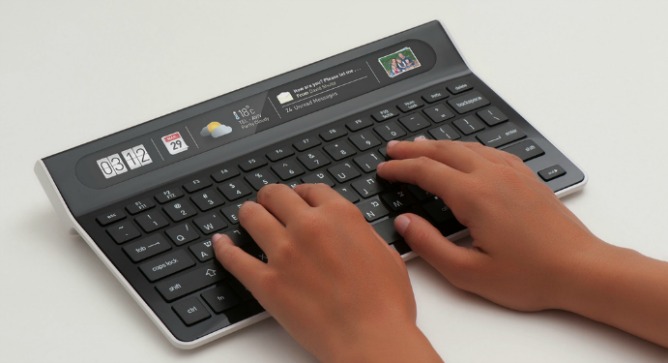 The Smartype screen also hosts widgets such as weather and time updates. Photo by Amos Bar-Ze'ev

Like many other successful business people, Israeli serial entrepreneur Dov Moran – best known as one of the geniuses behind the Disk-On-Key – has a deep, dark secret: He is a hunt-and-peck typist.

When he started wearing multifocals in his 50s, emailing got even more laborious as Moran adjusted his field of vision from keyboard to screen and back.

The result of Moran’s frustration is Smartype, an updated keyboard now hitting the e-market at just a hair under $100. Intended to transform typing for people of all ages and keyboarding abilities, it’s expected to roll out gradually to brick-and-mortar stores in the US, Europe and Asia in 2013.

Smartype’s main feature is a built-in liquid crystal display (LCD) screen just above the keys. This cuts down on eye and neck strain, allowing users to see what they’re typing in real time while minimizing keystroke errors.

The product also comes loaded with basic widgets including email notification, clock, photo viewer and weather updates. Additional bells and whistles, such as a scrolling news reader and stock ticker, as well as social network apps, are soon to follow.

Hands off my QWERTY

Moran had previously invested in Comfyware, a developer of keyboards for kids, but he never planned to revolutionize typing. A casual conversation with Uri Brison, then head of a group evaluating user experience at the ill-fated Moran smartphone startup Modu, provided the spark for Smartype.

“I came into Dov’s office one day while he was writing emails,” Brison relates to ISRAEL21c, “and he told me that he felt the setup of his desktop wasn’t comfortable enough. He said that maybe we could improve on this, and he came up with the simple idea of embedding an LCD screen in a keyboard to make it easier to type without having to lift your eyes up to the screen constantly.” 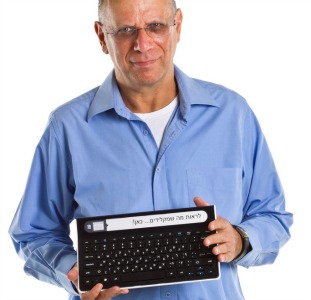 Dov Moran with his invention. Photo by Dan Lev Studio.

In 2010, Moran and Brison founded KeyView to give life to Moran’s idea.

“I had looked at the literature and found there was a known split-focus problem with classic keyboards,” says Brison. “Most people hunt and peck. Even good touch typists spend six- to 10-second bursts typing and then turn their focus momentarily to the keyboard to reorient their hands. This slows down typing and makes the experience less productive than it can be.”

The KeyView team at first thought to revamp the QWERTY keyboard layout, which is virtually unchanged from the time it was patented in 1867 — despite the fact that it was designed to optimize the movement of the letter hammers striking the ink ribbon in a manual typewriter and has nothing to do with efficient typing.

Another Israeli startup, Snapkeys, is working to replace QWERTY with a radically new form of typing for smartphones. And Brison learned that several companies tried different approaches to reconfiguring PC keyboards in years past, but their efforts didn’t catch on with the public.

“We therefore decided we cannot touch the layout but could play with the physical structure and design,” says Brison. “We made some subtle changes and will introduce more, but we’re starting with the screen and not everything at once.”

What began as a project to simplify typing led to the realization that an LCD screen close to the fingers is also a perfect display space for all sorts of information and keyboard apps.

“We have an open API [application programming interface] so that third-party or independent developers can make apps that reside in our keyboard,” says Brison. “We think there are lot of interesting things that can be done.”

Set up on the bucolic moshav (cooperative village) Yarkona near Hod Hasharon, which also houses Moran’s smart TV startup Comigo, KeyView employs a team of 10 dedicated to software and electronics design based on the company’s patents. 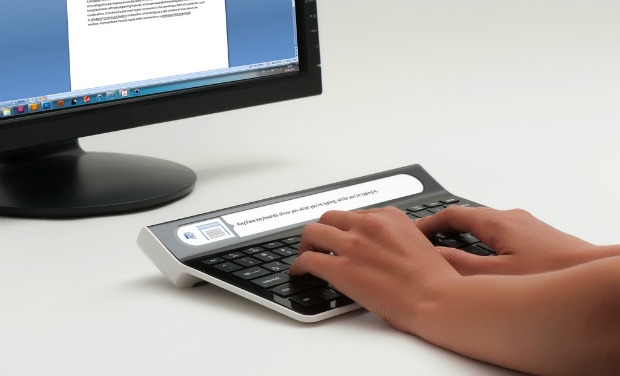 An embedded screen lets Smartype users see what they’re typing without looking up at the screen. Photo by Amos Bar-Ze’ev

Outside experts in ergonomics, electronics, plastics, mechanics, structural design, programming and manufacturing were brought in to perfect the product, which was debuted by KeyView at the January 2012 Consumer Electronics Show in Las Vegas.

“We showed our first prototypes there, got the thumbs-up from buyers from large retail chains and then raised money for actual manufacturing,” says Brison.

Manufacturing and assembly takes place in China, while all the electronic, mechanical and plastic design and software is done in Israel.

Smartype Hebrew/English launches first, via ecommerce sites, at the beginning of November. In the following months, models geared to different languages will become available. Brison explains that the software is multilingual, so it’s just a matter of changing the letters on the keys.

“We will work with local distributors in each country with experience in the computer peripherals market, accompanied by ecommerce sales,” Brison says.

UNCOVER ISRAEL - Get the ISRAEL21c
Weekly Edition free by email
Sign Up Now!
Bring Israel's story to life.
Millions of people around the world rely on us to gain a deeper understanding of Israel. We are the trusted source for original content you won't find anywhere else.
You can make a difference. Donate today to support journalism that brings Israel’s story alive.
SUPPORT ISRAEL21c
Read more on:   Gadgets, Technology, Dov Moran, Smartype