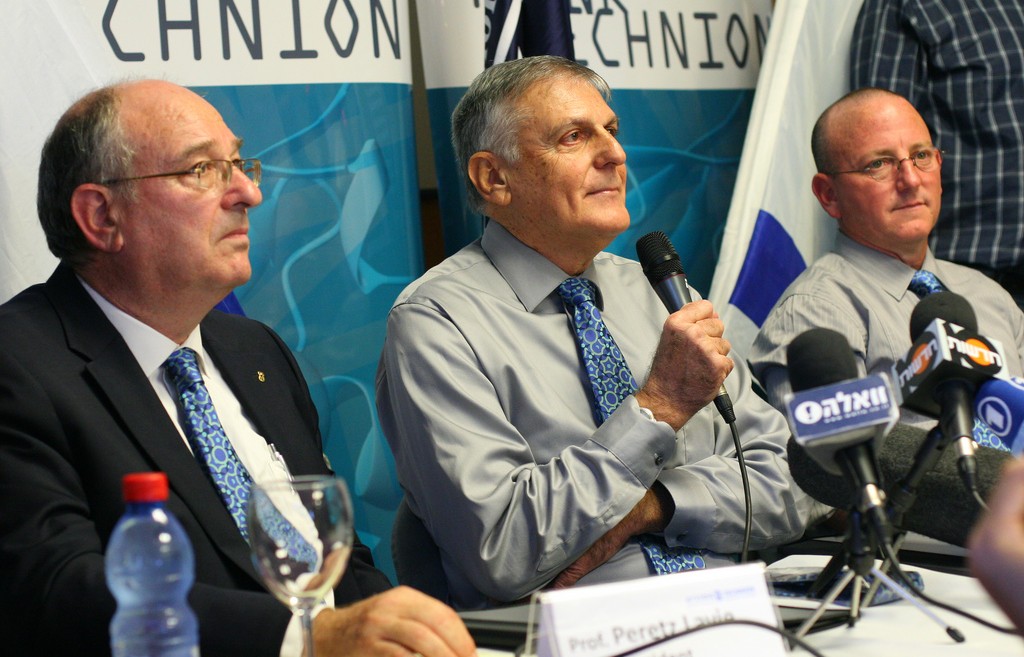 Prof. Dan Shechtman, center, at a press conference in 2011. Photo courtesy of Technion

During paramilitary training at his Israeli high school, Danny Shechtman was usually the first to jump on the barbed wire blocking the students’ path as they ran through a field.

“Everybody steps on you and then you try to shake yourself loose and run after them,” the Technion-Israel Institute of Technology professor related to ISRAEL21c at a Jerusalem press conference on Sunday after the Royal Swedish Academy of Sciences announced he was to become the 10th Israeli to win a Nobel Prize.

Shechtman stated that his rigorous early training “definitely” influenced his ability to withstand the professional scorn that first greeted his groundbreaking discovery of quasicrystals, atoms made up of non-repeating structural patterns found in aluminum alloys.

“In my youth group, Hashomer Hatzair, we were educated to become physically and mentally independent. You threw us on a desert island and we would survive — and I’m not different than other Israelis of my time,” said Shechtman, now 70, who became one of the Israel Defense Forces’ best sharpshooters.

Without all that metaphorical barbed wire strengthening his resolve, Shechtman likely would have given up on his breakthrough discovery in April 1982 of non-repeating patterns in quasicrystals. 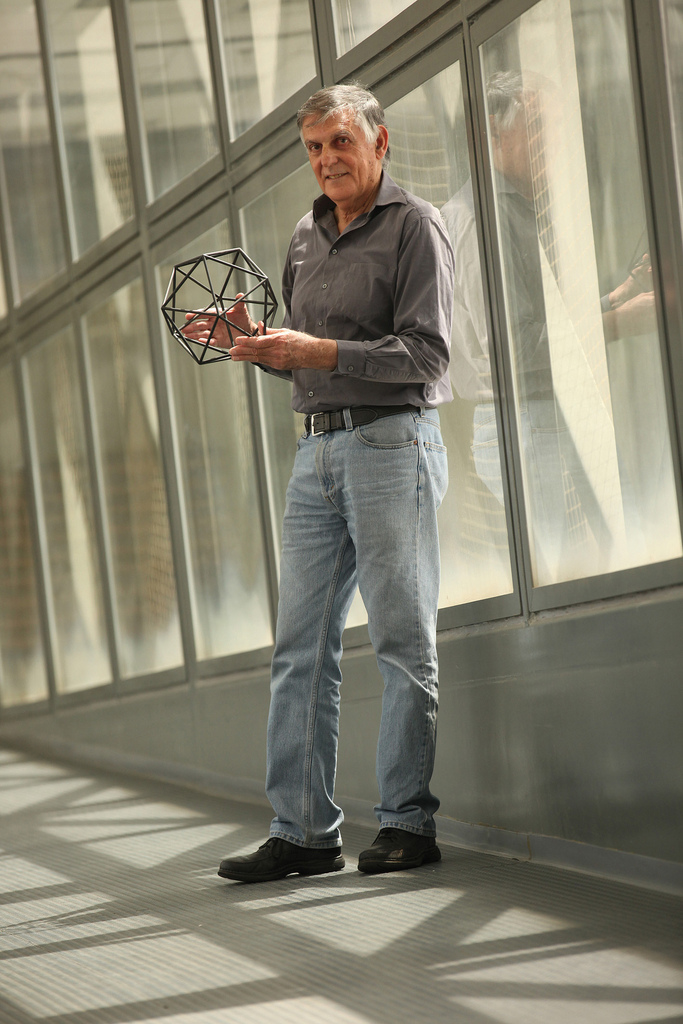 Prof. Dan Shechtman with a model of the quasicrystal. Photo courtesy of the Technion

“When I saw my first results, I was on sabbatical at the [US] National Bureau of Standards, NBS, developing alloys for the aerospace industry,” he related. Scientists at the time thought crystals always had repeating patterns, and ridiculed Shechtman’s research.

“My colleagues did not accept my results and most did not think highly of me,” he said. The head of his group at NBS called him a disgrace and asked him to leave.

In 1983, back at the Technion, his materials engineering colleague Ilan Blech was the first person willing to cast his lot with Shechtman. They made a physical model to explain the structure, and submitted a paper in 1984 to a journal of applied physics. It was rejected, but published six months later in a metallurgical journal. An American and a French scientist collaborated with the two Israelis to write another paper on the topic, published in November 1984 in a Swiss scientific journal.

“And then all hell broke loose as scientists — mostly young scientists — around the world started replicating my experiment,” said Shechtman. “Within a week, I started to get telephone calls.”

Shechtman also won the Wolf Prize in Physics in 1999 and the Israel Prize for physics in 1998 for his quasicrystal research, which has changed the understanding of the basic structure of matter.

“As opposed to the greatness of the scientific achievement, the practical applications are few and far between,” he admitted at the press conference.

However, those few are significant. An extra-strong type of stainless steel made in Sweden for surgical tools and razor blades gets its resilience from little quasicrystalline particles. And a French company used quasicrystal material to make a non-stick frying pan.

“If you cook on quasicrystals, your omelet will not stick to it, like Teflon,” said Shechtman. “But unlike Teflon, if you use a knife in the [quasicrystral] skillet, you will ruin the knife. With Teflon, you’ll ruin the skillet. And that’s not healthy.”

Because quasicrystal materials have a low coefficient of friction and are extremely hard, they could potentially be used to make better gears in fan mechanisms.

It would not be surprising if some of Shechtman’s Technion students one day capitalize on their professor’s discovery in a big way. A quarter century ago, Shechtman innovated a practical course in technological entrepreneurship at the institute. “If Israel is a startup country, I hope I am a part of that,” he said.

Describing himself as “a good student, but not at the top of the class,” Shechtman emphasized the importance of good educators. “Teachers must not only teach but encourage,” he said, relating that one time after he successfully solved a physics problem on the blackboard during high school, his physics teacher remarked, “Danny knows physics.”

“I’m 70 years old, and I remember that,” he said, revealing that he plans to dedicate much of his $1.45 million in Nobel Prize money toward the education of his grandchildren.

A second-generation Israeli whose grandfather became a prominent social Zionist after emigrating from Russia, Shechtman detects a slowing of the “brain drain” that has traditionally pulled Israel’s scientists to the United States.

“At one time, life in Israel wasn’t so good and life in America was wonderful. That’s no longer the case,” said Shechtman, who is an associate of the US Department of Energy’s Ames Laboratory at Iowa State University. “Life in America isn’t as wonderful and life in Israel is quite good, so people aren’t running away. When we have an opening at the Technion, we have so many applications from Israelis [working in the US] who want to come back to Israel.”

Shechtman said he maintains close professional and personal relationships with Turkish scientists and that religion never comes up in his work. “I see no reason why Jews should relate to science any differently than Christians, Muslims, Buddhist or atheists,” he said.

At the Technion, he researches solutions to energy-related problems through chemical, engineering, materials, mathematical and physical sciences.

“At scientific meetings, I always speak to students, and I tell them, ‘If you want to become a prominent scientist, be an expert in something,’ related Shechtman. “Usually, great discoveries come by serendipity, when you stumble upon something new, and you have to be able to realize it is something that wasn’t there before, and then try to explain what you see.

“Then, when you start to talk about it, you will face opposition. And here is the real test: If you believe in yourself, then listen to others but don’t let them discourage you as long as you are not convinced that they are right and you are wrong. In my case, I knew I was right.”

UNCOVER ISRAEL - Get the ISRAEL21c
Weekly Edition free by email
Sign Up Now!
Bring Israel's story to life.
Millions of people around the world rely on us to gain a deeper understanding of Israel. We are the trusted source for original content you won't find anywhere else.
You can make a difference. Donate today to support journalism that brings Israel’s story alive.
SUPPORT ISRAEL21c
Read more on:   People, Technology, Nobel Prize, Shechtman