Jewish, Christian and Muslim scholars come together in a book about the Temple Mount’s significance to the three monotheistic faiths. 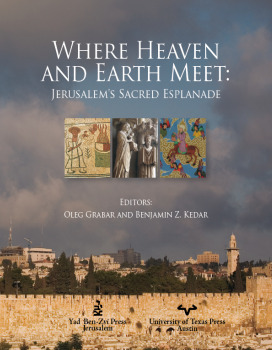 The new book, Where Heaven and Earth Meet, collects opinions about the history and meaning of the Temple Mount from adherents to the three faiths that hold it dear.

The Temple Mount in the Old City of Jerusalem is a magnet for the three major monotheistic faiths. Some believe the area is the center of the world and pilgrims flock there all year round.

The majestic Dome of the Rock shrine and the al Aksa mosque, the third holiest site in Islam, and the oldest extant Islamic mosque, sits on the Temple Mount. It shines over the Western Wall and Jerusalem’s most beautiful churches.

Yet that which Judaism, Islam and Christianity share also tears them apart. The conflict starts at the Temple Mount, a site known by various names, which was occupied by each faith at different points in time.

A new book Where Heaven and Earth Meet collects opinions about the history and meaning of the Temple Mount from adherents to the three faiths which hold it dear, aiming to bring them closer together. All the essays deal with Jerusalem’s sacred esplanade, an area that makes up about one-sixth of the area of the Old City of Jerusalem.

Edited by Oleg Grabar of Princeton’s Institute for Advanced Study and Prof. Benjamin Z. Kedar from the Hebrew University of Jerusalem, Where Heaven and Earth Meet is bound to shape new dialogue on one of the world’s holiest sites. Kedar, who lives in Jerusalem, tells ISRAEL21c that we should all do whatever we can to foster mutual understanding and acceptance.

The co-editors invited Christian, Jewish and Muslim scholars to write essays based on the site’s history. With 11 points of view, this is the first time, say the book’s editors, that Jerusalem-based Israeli, Palestinian, and Dominican institutes of higher learning have collaborated on such a project. It includes insights from scholars at the Hebrew University of Jerusalem, the Palestinian Al-Quds University and the Dominica École Biblique et Archéologique Française de Jérusalem.

Peacekeeper Prof. Sari Nusseibeh, president of Al Quds University asks: “Could Muslims ever see Abraham leaning over that Rock, about to sacrifice Isaac? Could Jews, and Christians, ever see Muhammad descending by Heavenly fiat into that precinct, and then being lifted up from that Rock unto the Divine presence?”

Cardinal Martini of the Dominican church asks: “Could Jews and Muslims ever see the parents of Jesus bringing their infant child to the Herodian Temple and offering him there to the Lord?”

According to co-editor Kedar, who is Jewish, the answer is ‘yes,’ but the book doesn’t claim to offer whole truths, what it hopes to do is to bring people closer together: “We decided to leave the differing views untouched, for we believe that readers should know that much about the subject remains uncertain,” he says.

Some unanswered questions that still perplex historians include: Was Herod’s temple perpendicular to the outer walls of the Old City esplanade, or did it deviate to the south? Was the temple of the Capitoline triad Jupiter, Juno and Minerva, located in the area of the Jewish Temple? Was the al Aksa Mosque reduced, after the earthquakes of the 1030s, to the five naves we see today, or was it always this size?

The Temple Mount known in Hebrew as Har Habayit, and in Arabic as al Haram al Sharif, is one of the foremost issues on the Israeli-Palestinian and Israeli-Arab peace agenda, says Kedar. “I thought if we could produce a book, sponsored by Hebrew University, Al Quds and also the Dominican Institute, this would be a step in the right direction, showing people who are committed to truth that with a fair treatment of the subjects we could produce together a book on this place which arouses so much passion and conflict.”

Kedar, a historian, tells ISRAEL21c that he learned a lot on the daunting journey to co-edit this impressive body of work. He says that part of the challenge was relating to the site through its different periods. One of the ways the editors approached this was by naming each chapter in accordance with the name by which the area was known during each of the historical periods covered in the book.

He points out that the book focuses on the area where the Jewish Temple used to be, and where the “most striking” Dome of the Rock has stood for the last 1,400 years. “To deal with it fairly and to deal with all periods fairly – this was the aim of this book,” he emphasizes.

The site is holy to Christians, for “Jesus taught there as a young boy and foresaw the destruction of the temple,” Kedar recounts. Sacred to Christians, Jews and Muslims, the “book tries to show all this side by side,” he concludes.