For Myasar Khamaisy, 44, her involvement with Sindyanna of the Galilee began with an empty nest.

It was 2015, her three daughters had left home for college, and she had nothing to do. To get a job, she knew she had to improve her Hebrew language skills. She signed up for a Hebrew course offered by Sindyanna in her Galilee village of Kafr Kanna.

Then she took a course in basket weaving. She became so adept at weaving baskets from bamboo and palm fronds that she now teaches the course in both Arabic and Hebrew.

Khamaisy was one of the first women in the village to attend courses at Sindyanna. Over the years, hundreds of women, both Arab and Jews, have participated. 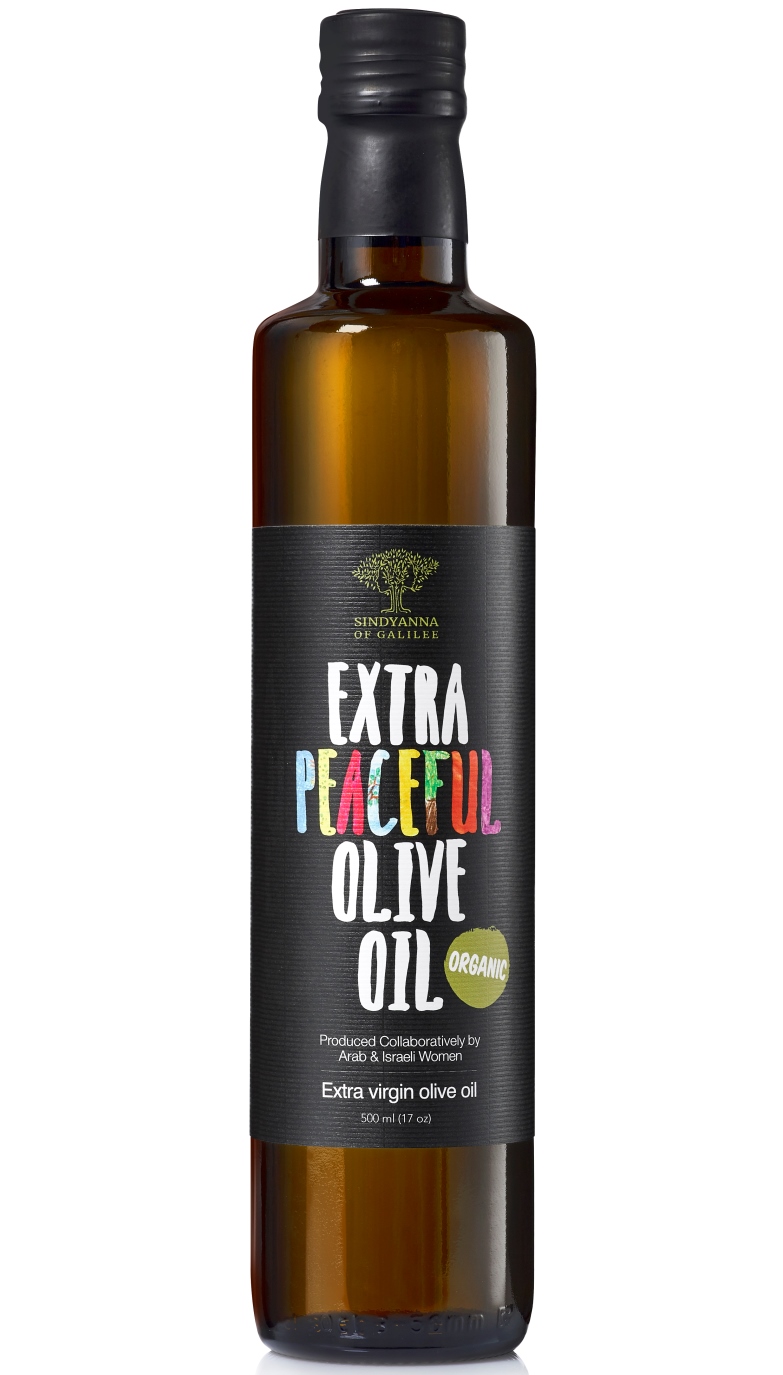 A goat was wandering through a parking lot in a nearby village as I drove to Sindyanna’s Visitor Center on a recent morning. Although set in Kafr Kanna’s industrial zone, inside the center there is a calm, pastoral feeling.

There are photos on the walls of olive groves and local farmers, artwork by Jewish and Arab women, shelves filled with olive oil, homemade soaps, local products like Conscious Carob Syrup, and some of the woven baskets that Khamaisy and other women have made, filled with homemade trinkets.

‘We are all connected’ 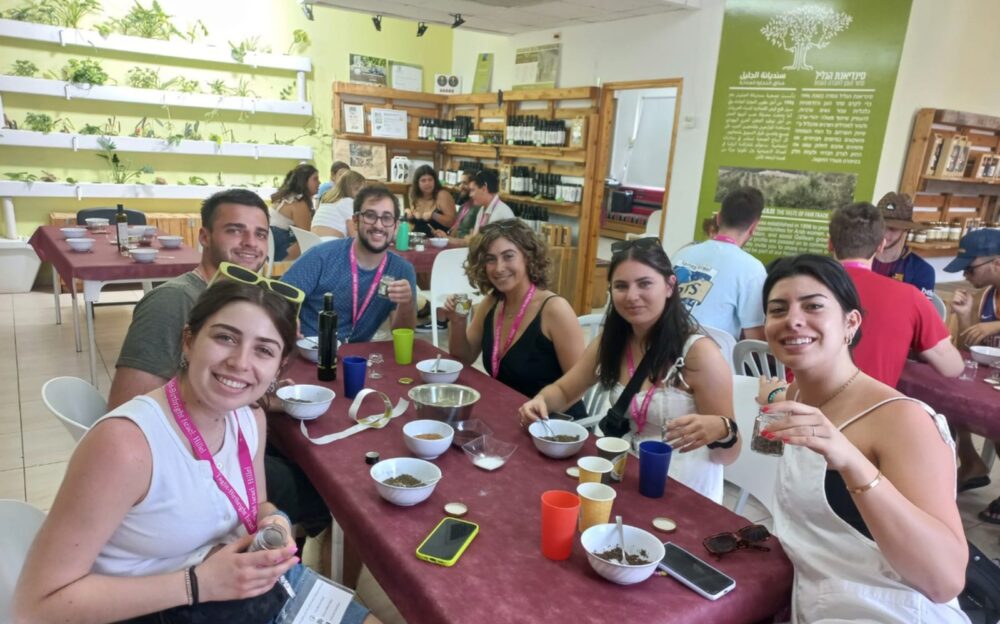 Birthright participants at Sindyanna of the Galilee. Photo courtesy of Sindyanna

During my visit, two Birthright groups came to learn about Sindyanna’s activities and make za’atar, or hyssop, mixed with sesame seeds and spices, to take back to the United States.

As Sindyanna co-director and group facilitator Nadia Giol, 51, told the Birthright visitors — some tattooed and all in their 20s — “We are all connected. What happens in Europe and Israel and America affects us all.”

Giol said that her own story runs parallel to the story of Sindyanna. She was born in “the shadow of the conflict.” Her parents were from the village of Saffuriyyeh, now part of the Tzipori national archeological park. 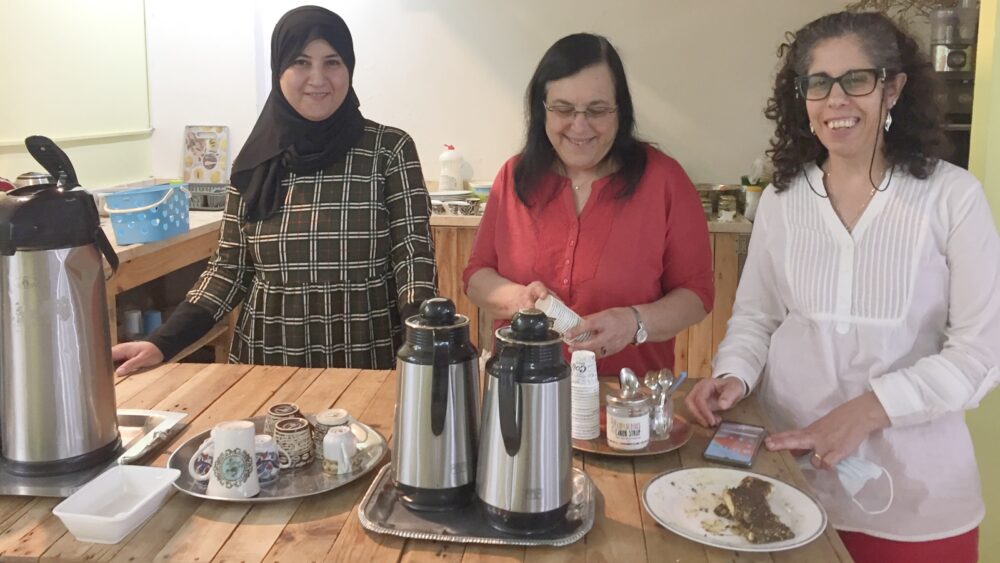 After marrying a Spanish man studying at Hebrew University in Jerusalem (he is Christian and she is Muslim), she lived in Spain for two years where she thought her involvement with the conflicts of Israel “would be finished.”

“But when you’re far away, your problems get bigger,” Giol said.

She and her husband moved back to Israel, settling in Nazareth, and she became active in multicultural groups but “they were more talking than working.” She trained to become a non-violent group facilitator with the goal of changing things through social work and education.

She began working at Sindyanna in 2015 and from the start, she said, “I felt like I was home,” because it was an organization where “we promote peace, work for the environment, and make changes.”

Giol added, “I come from a place of hope.” 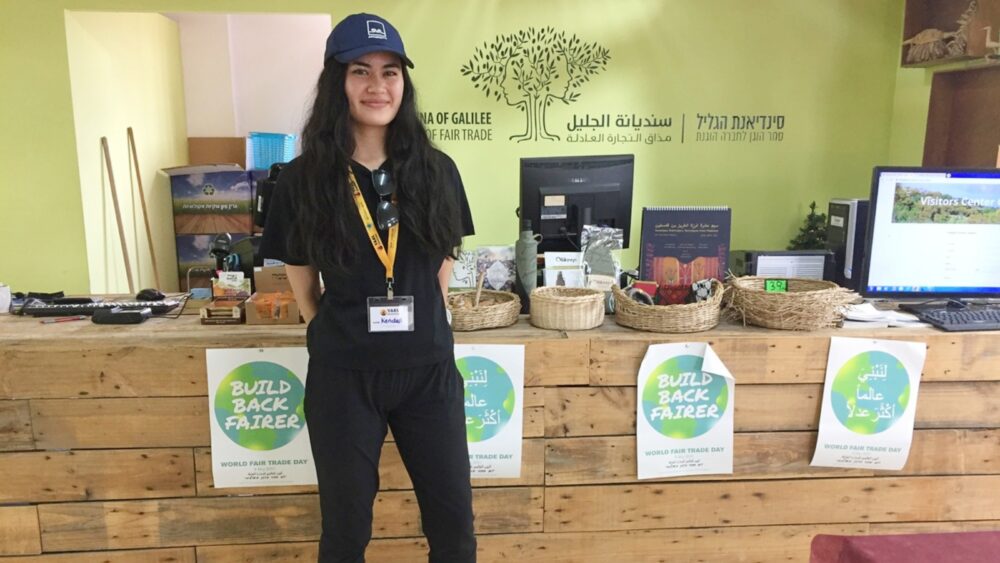 Kendall Simons, one of the Birthright participants, said she found Sindyanna’s story and its mission very moving.

“Especially the idea of enriching our lives by coexisting with other cultures,” Simons said. “As Giol said, ‘We create borders in our minds. If we can create borders then we can take them down too.’”

Before she started studying at Sindyanna, Khamaisy said she never met Jewish women, “and now we’re friends, we go to each other’s houses.”

When I asked her how her husband feels about her involvement, she said, “When he comes home after work and the house is clean and he has food, he’s happy.” Then she paused and smiled, “You know how men are.”

Hadas Lahav is co-director of Sindyanna, which she co-founded in 1996 after the Oslo Accords. She said the idea was to “to benefit people and society on both sides.”

Likening it to a startup, she said the organization brings money to Arab women because they take “raw materials and turn them into commodities.”

In the past year, Sindyanna has taught 30 women to set up hydroponic systems in their houses. Some of the women now sell the tomatoes, carrots and lettuce that they grow at home.

Despite the complex facts on the ground, Lahav said that Sindyanna’s “small successes will create something different in the end. The ability to live together is not naïve, it’s essential. Just the fact that there are interactions among the Jewish and Arab communities is very important.”