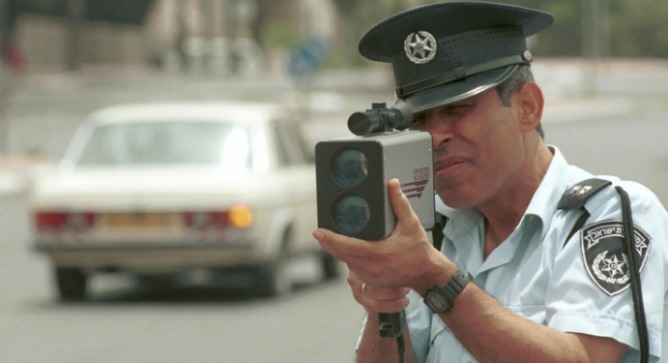 Whether we admit it or not, when we drive we want to get from point A to point B as fast as possible. At least that’s the case for about 90 percent of us, says Eyal Pe’er, an Israeli psychologist who studies speeding –– why we do it, and what might make us slow down.

Now in the United States for his post-doctoral fellowship at Carnegie Mellon University, the Fulbright Scholar is working on ways to better educate people about the risks and consequences of speeding.

Pace-O-Meter, a device Pe’er invented as an add-on for a car’s digital speedometer, not only provides information about how many miles per hour drivers are traveling, but also shows how many minutes it will take them to complete a given journey at a certain speed. He says it’s different than the GPS feature to calculate estimated time of arrival, and it can help people get a better handle on how little time they actually save by speeding.

The device has yet to be commercialized, but Pe’er is certain that if drivers had access to the information it could give, fewer would take the risks associated with driving above the speed limit.

While miles per hour, or miles per gallon, are readily understood, minutes per mile needs some mind bending. He explains: “Basically what we found in a recent study, which is also in several others more which are published and some forthcoming, is that people really don’t know how to estimate the time they are saving when they increase speed.”

On a fast track to crash

“People don’t get the relationship between increasing speed and decreasing journey time. They think as long as you will increase your speed you will decrease your journey time. But what really makes a difference in journey time is if you start your speeding from a low or high speed,” he tells ISRAEL21c.

“Actually a small increase in speed from a low speed can save a lot of time. But the same increase from a high speed will save much less time than people think it will.”

Simply put, if you speed while already on the highway the amount of time you will save is negligible.

“People still try to increase their speed when traveling at high speeds because there is a feeling that you will get to your destination much faster. But when you couple that with the increase of risk for car accident, a 10-miles-per-hour increase from 60 to 70 miles per hour can increase your risk of being in a car crash by 40 times. Each 1 mph increase of speed increases risk of crash by four times and the risk of the crash being fatal,” says Pe’er. “This kind of increase is risky for you and potential benefits are low.”

Pe’ers research included interviews with drivers to assess their perceptions. In one of his recent published studies, participants were asked to estimate their journey time when increasing speed and to estimate the speed needed to arrive on time. They also indicated the speed they would personally choose in such a situation. Looking at this data, Pe’er could see just how mathematically incorrect people’s judgments were when it comes to their rationale for speeding.

Most drivers, he found, will readily go beyond the speed limit to save time.

And this will be news to actuaries at insurance companies: There seemed to be no difference between males or females, young men or old, seasoned taxi drivers or new licensees. People were miserable failures when it comes to understanding how speeding influences driving times.

“We even did one study where we talked with veteran taxi drivers of 30 years and you would think that they would know that an increase in speed has little effect on journey time. Their judgment was the same as someone who got their license a year ago,” says Pe’er. “It’s a universal and robust bias that affects most of us.”

His interest in speed started at the Hebrew University in Jerusalem, over the course of his PhD studies into the behavior of speeders, aided by a scholarship from the Israel National Road Safety Authority. And now he is on the road to getting his new speed awareness meters up and running in cars.

UNCOVER ISRAEL - Get the ISRAEL21c
Weekly Edition free by email
Sign Up Now!
Bring Israel's story to life.
Millions of people around the world rely on us to gain a deeper understanding of Israel. We are the trusted source for original content you won't find anywhere else.
You can make a difference. Donate today to support journalism that brings Israel’s story alive.
SUPPORT ISRAEL21c
Read more on:   Eyal Pe'er, safety, driving, Pace-o-meter, psychology, Lifestyle, Culture