One tourist attraction in Israel worth exploring is the Israeli Museum at the Rabin Center. Located in Tel Aviv’s Ramat Aviv neighborhood, the center is a work in progress, providing educational programs for the country’s younger generation, not yet born when Prime Minister Yitzhak Rabin was assassinated in 1995, and cultural events for the rest of the population. The state-of-the-art museum is its centerpiece.

Authorized by the Knesset in 1997 and built by renowned architect Moshe Safdie, the center opened its doors in 2005 and the museum in 2010.

“It was a very new concept,” explains international relations director Annie Eisen to ISRAEL21c, during a tour of the premises. “Until then, Israel did not have the equivalent of a presidential library. But in light of the assassination, there was a sense of urgency to do something to preserve Rabin’s legacy, and in the process to teach citizens and visitors to the country about contemporary Israeli history.”

In the immediate aftermath of the assassination, Israeli industrialist Dov Lautman – at the time, head of the Israel Manufacturers Association — raised a significant sum in the business sector toward the project. Then-Tel Aviv Mayor Shlomo Lahat allocated the land on which the center was to be built. 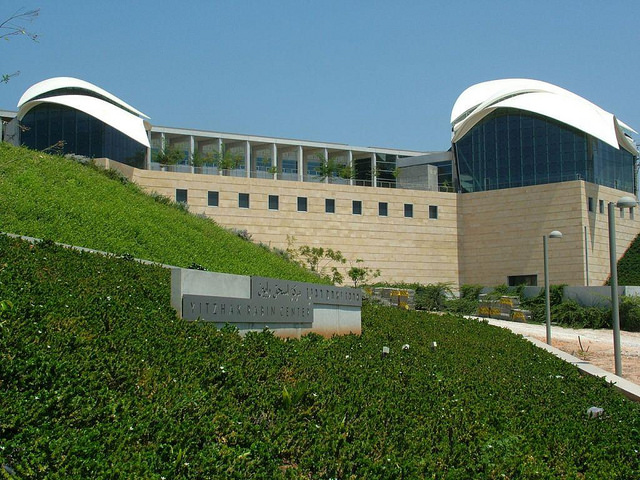 The building was designed by Moshe Safdie.

Dalia Rabin, daughter of the late prime minister and chairwoman of the center, took on the bulk of the fundraising abroad. This led to substantial donations from the American, German and Norwegian governments. A tribute to them, in the form of three large engraved circles embedded in the pavement of one of the center’s outdoor walkways, is called the “Path of Nations.”

The Israeli government provides an annual operating budget for the center.

When construction began on the empty lot, workers discovered an underground bunker, built in 1954 by Prime Minister David Ben-Gurion as a safe room. Some of the people involved in creating the center contemplated building the museum inside the bunker.

But Safdie had a different idea: to build the center on top of the bunker, thereby reflecting the two phases of Rabin’s life and legacy – his early years as a military figure serving as the foundation for his later stage as a peace-seeker.

Wings of a dove

The edifice is constructed with two wings, designed like huge doves, the symbol of peace. Massively high ceilings and large windows give the entranceway and main hall for cultural events – named after Leah Rabin, the prime minister’s widow, who died in 2000 – an airy, optimistic feel. 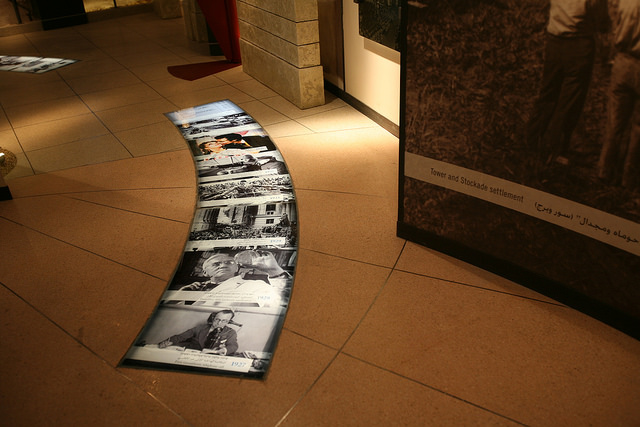 The museum inside the center is state of the art.

The museum itself contains a series of windowless rooms, each depicting a different period of Rabin’s life – going backward, from his assassination in 1995 to his birth in 1922 — and the corresponding history of modern Israel.

World events of political, cultural and technological note that took place during those years are highlighted on, and flush with, the floor. These include the release of the movie Gone with the Wind in 1939, and the advent of the cordless telephone in 1980.

Crafted on a downward, wheelchair-accessible ramp, similar to that of New York’s Guggenheim, the Israeli Museum – which Eisen says is “80% about Israel and 20% about Rabin’s life” — has an innovative way of illustrating each decade.

Upon entering, visitors are given a headphone device providing Hebrew, English, Spanish, Russian, French or Arabic guidance. The device is activated as soon as one stands in front of a display, and deactivated when one moves away from it. This in-sync experience gives the visitor the freedom to roam around at will, listening to or tuning out the personalized tour, which consists of 180 recordings.

Actual guided tours, given by some of the 40 full-time staff members, must be reserved in advance. 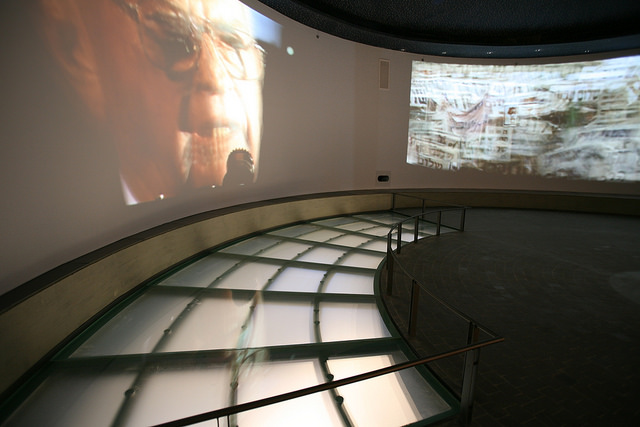 Currently, the center and museum host 80,000 people annually. Half of these are tourists from home and abroad, as is reflected in the fact that the Rabin Center ranks No. 7 on TripAdvisor’s list of 96 things to do in Tel Aviv. The rest are soldiers and students, who take part in workshops dealing in dilemmas faced by democracies.

“Not as many Arab students come as we would like,” says Eisen, pointing to the fact that all the signs in the center are written in Arabic, as well as in Hebrew and English. “But we try our best to encourage them.”

The first gallery is a round, dark room with large screens showing the televised footage of the moments prior to Rabin’s assassination and subsequent news coverage. Moving back out into the center, advertisements of upcoming concerts and other cultural activities are prominently on display.

This setup is, according to Eisen, “in line with Rabin’s legacy, because Israel is not just a place for which one is willing to die; it is a place in which to live.”