When Yoav Levanon was three years old, he was very curious about his mother’s upright piano. He touched it, he said, and immediately fell in love.

He started playing… and playing… and on May 6, Levanon, now 18, he released his debut album with Warner Music, “Monument to Beethoven.”

He has won countless awards — starting at the age of five — performing on some of the most prestigious stages around the world including Carnegie Hall in New York, the Verbier Festival in Switzerland and the San Carlo Theatre in Italy.

After his performance with the Franz Liszt Chamber Orchestra, a music critic wrote that Levanon “is not a child prodigy. He is an eight-year-old artist of high caliber.”

At age 13, he performed with the Israeli Philharmonic Orchestra. He appeared in a film with maestro Daniel Barenboim in 2021. 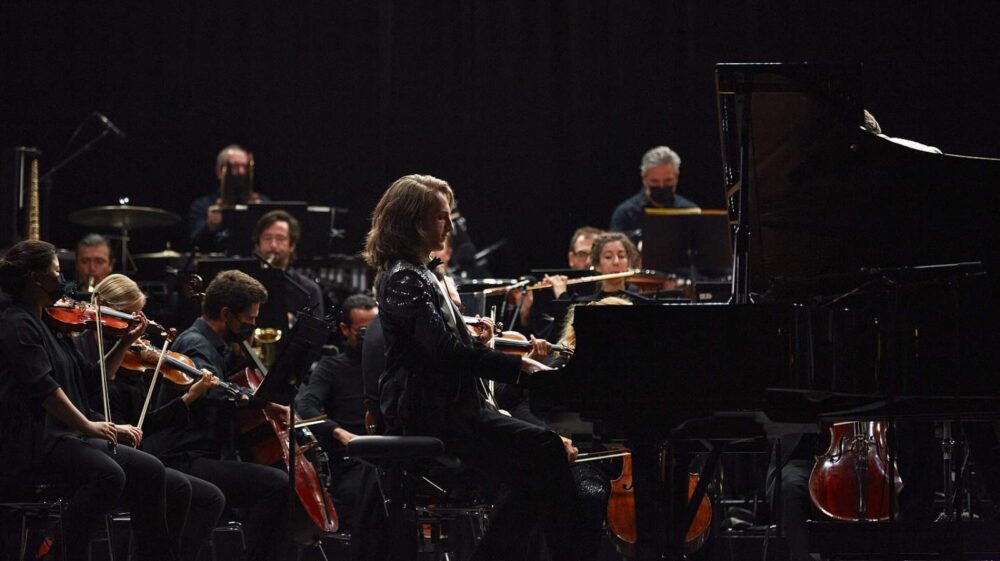 Levanon is energetic, funny, modest and full of passion for music. He tells ISRAEL21c that his parents have an appreciation for music but nobody in his family is a professional musician.

He remembered “pressing some stuff” on the piano. His mother, who plays piano as a hobby, showed him “a bit of what to do.” He “thought it was so cool,” and began studying piano. Two years later, he went to his first competition and won.

“I never get nervous at competitions because I think I have to win,” he said. “Competitions have always been a way for me to perform for people. I just love to play. I love having fun with the audience. What I play must have meaning for me because me and the audience are one.”

What the composer wanted

Levanon has had a variety of teachers over the years, explaining that he learned something valuable from each because “teachers look at different music in different ways.”

“There’s not one way to play,” he said. “I play composers who aren’t alive. Art is endless.”

He said he has had the opportunity to meet with “so many different amazing pianists, and I draw inspiration from everyone.”

When he starts learning a piece of music, he incorporates music theory to grasp the piece’s structure and history.

“I try to understand what the composer wanted,” he explained, so that he can perform it and “make it my own.”

Levanon has what appears like an effortless ability to memorize music. On stage, there is no sheet music for him to follow; it’s all in his head.

“I always wonder what it would be like to memorize a long speech,” he mused. “Well, a musical piece tells a story. You understand that if it goes this way, it will then go that way. It’s like when you see a movie and you understand. Like in a sonata, one time something happens and then you know it will happen a different way. It feels really natural for me to read music and then memorize it.”

The American concert pianist Murray Perahia told Levanon that before a performance, “you learn a lot and then forget it as soon as you’re on stage and then you just play the piece.”

Levanon lives near Tel Aviv in Hod Hasharon and has two older brothers and a younger sister. He loves his hometown, he said, because it’s “near strawberry fields.”

He attended a regular school until seventh grade. By then, he was already flying to competitions and the school principal suggested it would be better if he were home-schooled. Now he has only one more matriculation exam in math to complete and then he will receive his high school diploma.

He practices on three pianos in his house. Of course, when he goes to perform, he has to play on a piano he’s never touched before.

“I love the challenge of a new piano,” he said. “It’s interesting. It’s actually really nice. The hall is different and the acoustics are different and I know that this piano will bring out something different in me.”

“Do you ever get stage fright?” I asked.

“Never. I just want to play more!” he said, admitting that he has the privilege of choosing what he’d like to play.

To celebrate the launch of his debut album, “A Monument to Beethoven,” he’ll do some recitals and have broadcasts.

The album contains compositions by Chopin, Liszt, Chopin and Mendelssohn, who helped build the famous monument to Beethoven in Bonn, Germany, in 1845, to celebrate the 75th anniversary of the composer’s birth.

Levanon declined to name his favorite composers. “Each gives you something different. It’s like pizza and ice cream!” He let out an infectious laugh. “I guess it depends on your mood.”

He said he loves playing with an orchestra because “there is something so ‘wow’ about it. Technically speaking, I’m the soloist, but we merge ideas and I get so much inspiration from the other musicians.”

Levanon would like to try conducting and composing his own music in the future but right now he’s focused on his piano playing. He said he tries to get up early in the morning to “get a lot done before the day starts.”

I asked him if he liked pop music.

“I love to keep an open mind about music but classical music is still my big love because it has a lot of depth,” he said. “But I love jazz and beatbox.”

“Yes. Give me a tune and I’ll do something for you.”

What immediately came to mind was the first four notes of Beethoven’s Fifth Symphony and Levanon took off on a beatbox riff, doing it so seamlessly that even Beethoven himself would have applauded.