Yehuda Pilosof and his son Yisrael have a global reputation for outfitting amputees (and even an occasional donkey) with quality artificial limbs.

Yehuda Pilosof preparing a Haitian amputee for an artificial leg.

“I know it’s strange,” Yehuda tells ISRAEL21c. “The US and Germany have the best technology in this field. But the talent of the hands is more important.”

Yehuda also started out as a star soccer player, advancing to the national team as a teen. But in 1967, his high school principal persuaded him to find a solid career path, and he became an orthopedic technician. “To me, it’s an art,” he says.

He began by fashioning hands, although of the thousands of artificial limbs he’s been commissioned to make over the years, the majority are legs.

People hear about Yehuda Pilosof from friends and family in Israel, and also from media publicity. In 1999, he was in the headlines for fitting a Jerusalem Arab’s donkey with a new leg. The crippled animal would otherwise have been euthanized.

‘You have to be strong from the inside’

When Yisrael and his two sisters were children, they were a little wary of the limbless clients they encountered in their dad’s shop. 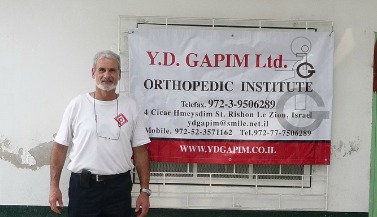 Yehuda Pilosof outside the prosthetics clinic Israel set up in Haiti.

“It was scary to see all these amputees,” says Yisrael, now a 30-year-old newlywed. “I am very sensitive, and you have to be strong from the inside to deal with all the things you see, but I knew one day I would do this, like my father does. I got to a phase in my life where suddenly I was ready.”

Israel doesn’t offer formal courses for prosthetics technicians, so the former soccer player took physiology courses in Tel Aviv University and traveled to Germany for training. Back home, he continued learning at his father’s side. “I have great teacher; one of the best,” he tells ISRAEL21c with a smile.

Yisrael learned how to put his feelings aside and focus on the positive outcome of his work. Still, the youngest patients tug at his heartstrings. He shows a video clip of a little Arab girl from Hebron trying out her new prosthetic feet in the Pilosofs’ workshop. She’s grinning, but it wasn’t like that beforehand.

“When she first came to us, she was so sad. Then after she started walking with the prostheses, she started to dance. It made us so happy.”

Their youngest patient was a boy referred from Jerusalem’s ALYN Pediatric and Adolescent Rehabilitation Center, born with no hands. “We started working with him when he was 2½, and now we are ‘growing up’ with him. Every few months we make him new hands because he grows very fast,” Yisrael says.

Helping amputees in Haiti and Peru

Right after Haiti’s catastrophic earthquake in January 2010, the phone rang in the workshop and a man told Yisrael he was calling from the office of President Shimon Peres for Yehuda Pilosof. Yisrael thought it was a practical joke and hung up. But the man called back and persuaded him to get his father on the phone.

“They told us they wanted to get an Israeli group together to build a rehab center in Haiti, and the president had heard about my father’s work,” recalls Yisrael.

Yehuda traveled to Haiti twice. He made limbs for 15 people, including a professional dancer from Port-au-Prince who was flown to Israel after losing his right leg during the earthquake. 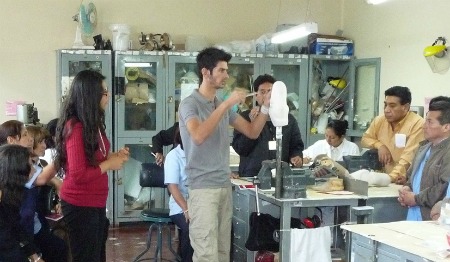 He still gets emotional when he describes the scenes Israeli relief workers encountered in Haiti. He recalls a man lying on the ground just outside the hospital clutching a baby. The man was dead and the living child had to be pried out of his arms.

Yehuda prayed every morning alongside Muslim Turkish relief workers. He brought along his own kosher food, but ended up handing it out, along with his clothing, underwear and socks, to earthquake victims. “All the conditions were very difficult. It’s impossible to understand if you didn’t see it.”

When Yisrael received a call a few months later from MASHAV, Israel’s Center for International Cooperation, asking the Pilosofs to lead a seminar on prosthetics in Peru, he realized right away it wasn’t a joke.

The seminar was the result of a conversation between the Israeli ambassador to Peru and the wheelchair-bound Peruvian minister of health. The Pilosofs spent 10 days at a rehab center, training technicians and physicians.

“We were in shock because the machines and materials there were like what we used 35 years ago,” says Yehuda, who also traveled to Sri Lanka in 1992 to make artificial limbs for soldiers as part of a hush-hush Israeli humanitarian mission. “They were still using wood and stainless steel, which are very heavy and difficult to work with.”

The Peruvians were extremely grateful, Yisrael says. Just before they left, one of the trainees approached Yisrael. Wearing a crucifix, he asked the Israeli through the translator if he had a star of David (Magen David) to give him. The Israeli realized he had such a necklace tucked away in his wallet. “I gave it to him and he put it right around his neck.”

Dreaming of opening an Israeli center for prosthetics

Yehuda has made thousands of limbs for victims of accidents, illness, terrorism and war. “The process takes about three days depending on how big the prosthesis is and how long we have to spend with the patient to perfect the alignment,” he says.

The oldest patient was a 95-year-old man who had lost a leg many years before.

The Pilosofs don’t make myoelectric prosthetic limbs, which can be moved with the help of electric signals from the patient’s arm muscles, because few patients qualify for such a specialized prosthesis.

To increase the number of young people going into the field in Israel, Yehuda wants to open a training center that would also offer seminars for orthopedic technicians and doctors from all over the world.

The dream may become reality with the help of a former patient, a wealthy European woman who came to the Pilosofs last year out of desperation.

“She was a double amputee and a difficult case … nobody wanted to touch it,” recalls Yisrael. “We were the first people in the world to believe she could walk again after 12 or 13 years in a wheelchair. She wanted to show all those who said ‘no’ that it could be done. We made the two legs for her and she walked. Now she’s promised to build us a [training] center here. We’re hopeful.”