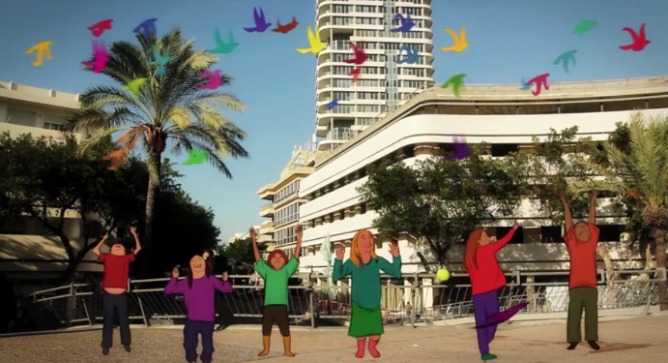 A still from the new ISRAEL21c and iCenter movie, The Man Who Taught Me to Fly.

When Yossi Leshem was a boy, he longed to fly with the birds. As an adult he turned that dream into reality and in the process managed to make the world a much safer place – not just for birds, but for people too.

In a new film created in a joint initiative by ISRAEL21c and the iCenter, as part of the latest iMMERSE installment, we take a look at Leshem’s unique story, and offer an appealing accompanying educator’s guide that will engage youngsters everywhere.

Israel is one of the most important centers for birdwatching in the world. The twice-yearly migration to and from winter sheltering sites goes directly over Israel, in both spring and fall.

The country provides a vital refueling stop for the birds, who are flying for thousands of miles, often across desert.

“People in the bird business know that this is a place to come,” says Yossi Leshem, director of Israel’s International Center for the Study of Bird Migration and a senior researcher in zoology at Tel Aviv University.

“Israel sits on the junction of three continents. For bird migration, it’s heaven.”

Leshem, one of the country’s top bird experts and a world-renowned naturalist, is a key player in the government’s $10 million program to revamp the national network of birding centers around the country. The five-year plan, now underway, calls to improve some of the existing eight birding centers and build seven new ones. Each center will highlight education, research and conservation of a specific region and its birds.

“It’s a huge compliment that the government of Taiwan wants to adapt our project,” Leshem, who works with the Society for the Protection of Nature in Israel, tells ISRAEL21c. “In November, people from all over the world will meet at a seminar in Taiwan. Instead of the project just benefiting Israel, Jordan and the Palestinian Authority areas, it’s now going to the Far East and from there to the whole world.”

Leshem’s book about the project, Buma the Barn Owl: A Farmer’s Friend, with photography by Amir Ezer, has had two very successful publishing runs in Hebrew and Arabic. This week, the English-language version of the book – which comes with a DVD – is debuting.

As Leshem himself proves, the sky is the limit when it comes to your dreams.

Click here for details Increasing affinity, understanding and joy for Israel through education Click here for details
Bring Israel's story to life.
Millions of people around the world rely on us to gain a deeper understanding of Israel. We are the trusted source for original content you won't find anywhere else.
You can make a difference. Donate today to support journalism that brings Israel’s story alive.
SUPPORT ISRAEL21c
Read more on:   Environment, Yossi Leshem, Social Action, Education