On the hunt for bugs in Morocco: Dr. Shimon Steinberg inspects strawberries for spider mite, a devastating agricultural pest.

Of all the pest-gobbling insects and spiders Dr. Shimon Steinberg encounters as R&D manager for Bio-Bee Sde Eliyahu, he’s particularly partial to the predatory mite. It may not sound lovable, but this minuscule “very handsome, nice orange spider” is a highly efficient enemy of the spider mite, a devastating agricultural pest. It’s also fast moving, a trait much admired by Steinberg, a marathon runner.

Besides, Steinberg tells ISRAEL21c, the two-millimeter-long, pear-shaped creature is Bio-Bee’s top seller worldwide. “Sixty percent of California strawberries since 1990 are treated with this predatory mite from the Holy Land,” he says like a proud papa.

Bugs are Steinberg’s bread and butter. After 22 years at Bio-Bee, he is still excited about his work at the company at Kibbutz Sde Eliyahu which provides beneficial insects and mites for biological pest control. It also raises bumblebees for natural pollination in greenhouses and open-field crops, and sterile Mediterranean fruit fly males to control this major pest in fruit trees.

“This is not fiction; it’s in your backyard,” Steinberg says. “What we do is mass-produce these natural enemies in 30,000 square meters [about 323,000 sq. feet] of state-of-the-art greenhouses where we give them the optimal conditions to reproduce.”

The idea is to undo the damage of chemical pest control and encourage what nature intended. In Israel alone, Bio-Bee products have enabled sweet-pepper farmers to reduce the use of chemical pesticides by 75 percent.

“My dream is to narrow the gap even more by finding more robust and reliable good bugs we can mass produce or conserve in the field, as well as create more public demand for natural pest control and increase awareness among growers,” he says.

Steinberg, born in the Tel Aviv suburb of Ramat Gan in 1954 to Slovakian Holocaust survivors, was a disciplined pupil with a passion for tennis. He started playing competitively at age 10 and continued until his army days. Steinberg finished his compulsory military service as deputy commander of a combat engineering platoon and served many more years in the reserves. 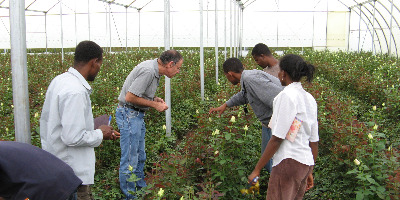 He enrolled at Tel Aviv University with the aim of becoming a physician, until zoology professor Lev Fishelson “showed me how much an extraordinary lecturer can influence your life. I just fell in love with zoology.”

Steinberg specialized in entomology – the study of insects – in the hope of finding a practical and useful profession. In his last year of college he came upon the field of biological plant protection. His graduate studies at Hebrew University’s Faculty of Agriculture in Rehovot focused on parasitic wasps that protect citrus trees from the Florida red scale and codling moths that were devastating apple trees.

“I discovered just the things that I liked and dreamt about that would definitely help farmers,” Steinberg says. “Only in the last 120 years have people started understanding how to practically exploit the natural phenomenon of natural enemies, such as minute bugs and spiders, that exists everywhere.”

When he was preparing to leave for post-doctoral studies at the University of California-Riverside, he received a phone call from Akiva Falk at Kibbutz Sde Eliyahu. Falk, who had founded Bio-Bee in 1983, persuaded Steinberg to move to Israel’s north rather than America’s West Coast.

“It was a rare chance to use all I’d learned and practice it in the field with the growers,” Steinberg recounts. “I started as R&D manager part time in 1988, then went full time in 1990. Looking back, I absolutely do not regret my decision. Fortunately, my wife stood with me and behind me, supporting me along the way.”

Miri Steinberg, a plant physiologist, taught high school biology after the move. She now works for the Jezreel Valley Regional Council. The couple’s three sons, ages 25, 23, and 19, show little interest in insects, according to their father. “It’s not contagious,” he says with a laugh.

Bio-Bee exports eight different species of biological control agents, plus pollinating bumblebees, to 32 nations from Japan to Chile. About 45 percent of its market is domestic.

Subsidiary BioFly produces sterile male Mediterranean fruit flies for release among crops. The sterile insect technique, pioneered by BioFly in 2004, is making inroads in controlling this devastating pest. BioFly collaborates with Jordanian and West Bank Palestinian Authority agricultural experts and expects to begin exporting the flies to other Mediterranean countries.

Bio-Bee had 12 employees when Steinberg joined in 1988. Now it has 150, 50 of whom live on the kibbutz that patiently waited 10 years for the industry to turn a profit.

Though the kibbutz is still the company’s major shareholder, there have been outside financial investors since 2004. Steinberg’s R&D is supported by the Ministry of Commerce through venture capital funds, and has an R&D and marketing alliance with Holland’s Koppert Biological Systems, the international market leader in the field of biological crop protection and natural pollination.

“We are now crucial to the economy of Sde Eliyahu and could only work on such a dedicated kibbutz where people love what they do,” asserts Steinberg, who in his spare time is an avid bird-watcher and the second-oldest member of a local long-distance running team.