“The road to success is paved with failures,” says Israeli high-tech icon Dov Moran, who uses this adage as the title of one of his lectures to young entrepreneurs. “And high-tech is not as easy-breezy as it may appear from the outside.”

Moran, whose latest endeavor, Comigo, is a “smart TV” box for interactive viewing, ought to know. This maverick and magnate of Israeli technology openly admits to having had more than his fair share of disappointments and massive losses alongside his accomplishments.

One such accomplishment – which made him and his former company, M-Systems, a household name – is the DiskOnKey (also known as a USB flash drive or USB stick), a chip-based memory device enabling the quick transfer of information from one computer to another.

Another, “less visible, but far more important product,” according to Moran, was the DiskOnChip, “the real breakthrough” in smartphone use. 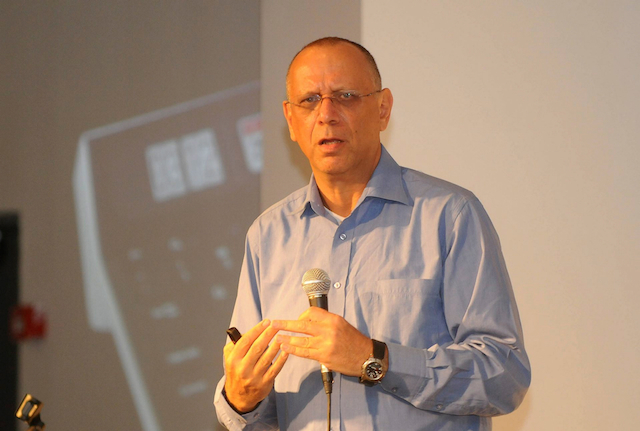 “Today you take it for granted that your phone acts as a hard disk, with high speed and tons of memory,” he tells ISRAEL21c. “But when we came up with this concept 12 years ago, it was inconceivable.”

Equally inconceivable is that Moran considers his sale of M-Systems to SanDisk in 2006 for $1.6 billion as a kind of failure.

“I had thought it would be better to take the company to higher heights. But there was a constellation of factors that necessitated the sale, which benefitted the shareholders. And when you’re the head of a company, you have to do what is right for them.”

Despite his “heavy heart,” Moran moved on to Modu, the world’s smallest smartphone. Though its patents were bought by Google for $4.9 million, Modu could not compete with the iPhone, and Moran lost $15 million.

“But that’s not what bothered me,” Moran says. “I mean, obviously I would have preferred not to have lost money, but when you get past a certain amount, it’s not critical. What really upset me was that I disappointed my investors.”

Modu’s closure had one very positive effect on Moran, however.

“It made me stop being afraid of failure. When you don’t fail, you fear it. Once it hits big, you are released. This freed me up to go wild with ideas. And now I have a greater abundance of ideas than ever. Not all are good. I know that some companies will close. But so what?”

Today, Moran — who calls himself a “decision-making machine” — has 18 companies, some of which he established and some in which he invested. Last year, ISRAEL21c reported on Moran’s KeyView, maker of the Smartype keyboard. Comigo is his main company, consisting of 35 employees.

“At Comigo, we’re trying to anticipate the future of television viewing. The idea is for users to see their TVs, smartphones and tablets as interchangeable, and for there to be a connection among viewers,” he explains.

“For example, if I’m watching a soccer game, I can invite you to watch it with me. If you accept my invitation, we will be able to see each other in the corner of our screens and discuss what is going on as though we’re at the stadium together.”

Moran hopes this will become a fixture in every Israeli household, as the cost of the box for consumers will be less than $100. All that is required after that is a cable to hook it up to the TV, and WiFi for connecting to all handheld devices. He is forging business partnerships before releasing the product to the public.

Willing to climb by the fingernails

Comigo is headquartered in a renovated house in the moshav (cooperative village) of Yarkona. Moran, who lives in Kfar Saba, says that his selection of the pastoral site was intentional.

“I wanted a change from my office-building scene,” he says. “I needed to see greenery out of my window.”

Given Moran’s grueling schedule – driving and flying long distances on a regular basis – he has few opportunities to enjoy the view.

But jet-lag does not slow him down. At 58, he is as energetic and determined as he was when he graduated from the Technion-Israel Institute of Technology and completed his military service in the Israeli Navy.

“In order to work in the startup environment, you have to have a lot of faith and passion,” he says. “Otherwise, you won’t be able to reach the level of dedication required to succeed. If you don’t have the genuine excitement, you can’t handle the inevitable rejections.”

He uses the recent purchase of Israeli startup Onavo by Facebook, for more than $150 million, to prove his point:

“These young guys who worked for me at Modu came to ask my advice about this company [Onavo] they wanted to set up. I told them, ‘Guys, this won’t fly; it has no chance.’ But they went ahead with it anyway. In the process, they had to change their model twice. What caused them to succeed was determination and flexibility. You have to want it so badly that you’re willing to climb by your fingernails.”

Those who have not experienced the startup world first-hand, he says, are often seduced by a misconception: “People saw the [2010] movie, The Social Network, about Mark Zuckerberg’s founding of Facebook and thought, ‘Wow. A young guy with an idea raised some money and then — bingo. But the truth is much more complicated and the path a lot tougher than it looks. I always tell young entrepreneurs to know what they’re getting themselves into. Is it worth it? Yes. But having a good idea is only a fraction of what it takes to succeed.”

Moran believes that exits do not benefit Israeli high-tech in the long run.

“Contrary to what many people claim, when an Israeli company is sold, not much of it remains in Israel,” he says. “And even if the foreign company keeps a research-and-development operation here, it still doesn’t solve the problem.”

This, he says, is because R&D centers grab up the good engineers by paying salaries with which Israeli companies are unable to compete. “Take Onavo, for instance,” he says.

“If today it employs 30 people, very soon it will become apparent to Facebook’s Israel office that the 15 of them who are not programmers are redundant. That is the disadvantage of this whole thing. There has to be a better balance.”

He continues: “For every three engineers that Google, Facebook, Yahoo or Intel hired, an Israeli startup could have been established. Not all such startups would succeed, but one in 10 would. And such a company would benefit many more Israelis than exits do. It would not only hire engineers, but employees in logistics, sales, marketing and everything else.”

It is this kind of “blue and white” ecosystem that Moran considers crucial for the financial future of the country. It remains to be seen whether Comigo will succeed by staying at home.

UNCOVER ISRAEL - Get the ISRAEL21c
Weekly Edition free by email
Sign Up Now!
Bring Israel's story to life.
Millions of people around the world rely on us to gain a deeper understanding of Israel. We are the trusted source for original content you won't find anywhere else.
You can make a difference. Donate today to support journalism that brings Israel’s story alive.
SUPPORT ISRAEL21c
Read more on:   Modu, SanDisk, M-systems, diskonkey, Dov Moran, People, Innovation, Technology