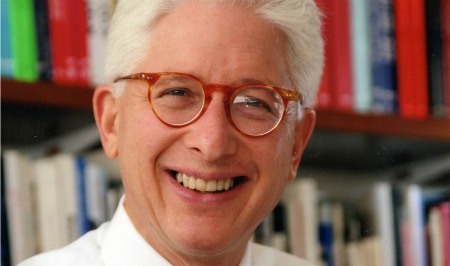 “For me, the personal and the professional get inextricably intertwined,” Snyder tells ISRAEL21c during an interview in his office at the recently refurbished Israel Museum in Jerusalem. “I realized a long time ago that I’m an institution person. I had a rather long tenure at the Metropolitan Museum of Art [in New York City] and it was deeply satisfying, in part because I became part of it and it became part of me.”

As director of the Israel Museum for about 15 years, the Harvard-educated Snyder certainly has come to be associated with the institution he has put into the international spotlight. In February 2011, the Pennsylvania native appeared at No. 46 in the French Journal des Arts as one of the 100 most influential people in the art world.

It would be fair to say that the Israel Museum defines Snyder in a way that its host country does not. Though he resides in Jerusalem, he holds only American citizenship and speaks with staff and visitors in English.

“We came because I felt professionally this could be a great challenge that could make a great contribution to enriching the cultural landscape here and in the rest of the world,” he explains. “It was not about making aliyah. We love living here, but we are actually Americans.”

In fact, he adds, “Sometimes what happens is that the longer you live away, the more American you feel.”

Snyder had never been to Israel before the job offer came “out of the blue” from Jerusalem Mayor Teddy Kollek, who had founded the museum in 1965. Today, Snyder tells visiting Birthright groups that the museum was the sole destination of his personal “Birthright tour” facilitated by the late Kollek in a successful bid to lure MOMA’s deputy director and co-author of the 1993 book, Museum Design: Planning and Building for Art (Oxford University Press). James Snyder came to the Israel Museum to help enrich the cultural landscape. Photo by Ariel Jerozolimsky
“It was a little illogical for us to come,” admits the sartorially snappy Snyder, who looks younger than his 59 years despite his coiffed head of white hair. “What really made me almost instantly decide that I would take this position was the unbelievable power of the Israel Museum as a place of culture.

“What we’ve completed now with our [$100 million] campus project is, in a way, the vision that emerged from the potential that I saw the first time I came here – the architecture, the art garden, the Shrine of the Book, the collection of 500,000 things that started at the beginning of time. The opportunity to be responsible for tapping that potential is really what drew me here – and the sheer beauty of the place.”

He arrived with his wife, book designer Tina Davis, and their children Lily, then 13, and Daniel, then 11. “Tina was willing, and the children were willing to see this as an adventure.”

In September, Lily Snyder will marry Josh Bernstein, host of the Discovery Channel’s Into the Unknown, at the Rockefeller Archeological Museum in East Jerusalem, which is run by the Israel Museum.

Though she and her brother work and reside in New York, they are fluent in Hebrew. Their language facility was one of the byproducts of their ecumenical education at a Jerusalem school run by the Mission Society of the Anglican Church.

“The children expected a different kind of open embrace that is not customary here, and had to learn their way in a different cultural setting,” says their father. “What succeeded for them was the opportunity to have a highly intercommunal life. It was fantastic to be in the holy and universal city of Jerusalem and to represent traditional Jewish upbringing in a setting which mixed as many possible strains of monotheistic heritage as you could find here. If the museum is about visual cultural universalism, their lives here became about human cultural universalism, and it was a wonderful learning experience.”

Tina Davis’ most recent project was designing and writing a series for children and parents published by Stewart, Tabori and Chang – Look and Cook, Sew and Grow and See and Sew – that her husband describes as “lavishly illustrated with vintage illustrations she culled over time.”

Snyder’s office at the Israel Museum, lined with art posters and overflowing with coffee-table books on art and archeology, is where he receives distinguished visitors and diplomats from many countries. His renown is such that he was asked to join Metropolitan Museum of Art (New York) director Thomas Campbell, Van Gogh Museum (Amsterdam) Director Axel Ruger, Art Institute of Chicago Director Jim Cuno and State Hermitage Museum (St. Petersburg) Director Mikhail B. Piotrovsky on the speakers’ roster at a three-day International Tourism conference in Jerusalem at the end of March.