Think “caviar” and the Caspian Sea probably comes to mind along with Russia and maybe Iran. Well, think again. Because some of the finest caviar in the world today originates from ponds at Kibbutz Dan in Israel.

It all started with a business trip to Russia in 1992. Aquaculturists Yigal Ben-Tzvi and Avshalom Hurvitz, who grew up on Kibbutz Dan and run its fish farms, bought some prized Osetra sturgeon eggs to hatch for the growing Israeli population of Russian immigrants who love this variety of fish.

At the time, harvesting the fish’s precious eggs was not on their agenda. Russia and Iran had that market cornered. But when the United Nations declared wild sturgeon endangered in 2003, Ben Tzvi and Hurvitz decided to go for it even though that entailed holding onto their stock of fish for about another six years until they reached the peak age. It was a good decision, because in 2006 the export of all wild sturgeon caviar from the Caspian and Black seas was banned.

The little Galilean kibbutz just had to wait until 2009 to conquer the market.

Fortunately, sturgeon farming was not – and is not – Kibbutz Dan’s only source of income. About 96 percent of its business is farm-raised trout, which unlike sturgeon is a kosher fish. To retain its kosher certification, today the kibbutz does not sell sturgeon or sturgeon caviar domestically but it has become its most profitable product.

Ben-Tzvi explains to ISRAEL21c that when the fish reach four years old, they are sex-typed by endoscopy under anesthesia. The males are killed, frozen and shipped to a Russian wholesaler. The females are pampered for another four years, at which time their eggs are surgically biopsied under anesthesia. The staff can tell by the eggs’ taste, size and color if the mother is sufficiently mature. Eggs bigger than 2.8 millimeters in diameter and somewhere between gold and gray-black in color signal readiness.

Sturgeon are a hardy breed that can outlive humans, and the older fish make more eggs. “Now we have 4,000 or 5,000 sturgeon that are older than eight. Altogether we have about 70,000 fish of all ages, the youngest one a year old and the oldest about 12 years.”

Once the eggs reach the right size and color, the mature females are killed, and the eggs removed from their bellies. This meat, too, is shipped to Russia for consumption. The caviar is put in two-pound tins and left to curate for at least one month in the tin before being repacked and shipped to wholesalers in the United States, France, Germany, Switzerland, Japan, Singapore and Australia.

Under private label or the kibbutz’s Karat brand, the product can be bought on gourmet websites for about $107 for a one-ounce tin. 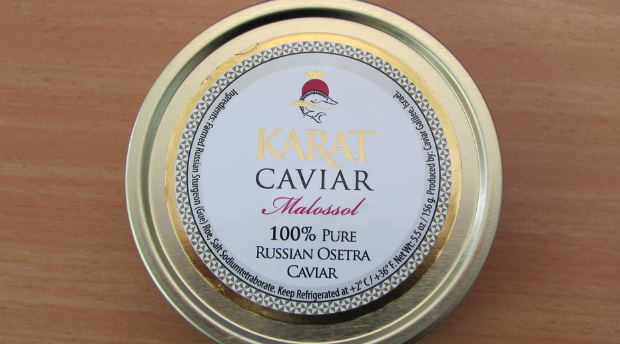 About four tons will be produced this year, although at full tilt the kibbutz can turn out eight tons of caviar annually.

“We raise only Osetra sturgeon. That is our big advantage because most caviar in the world is not Osetra and is much less good,” says Ben-Tzvi. Only three other farms in the world raise Osetra, and the Israeli variety has gained a premium reputation partly because the ponds use water pumped from the Dan River, a tributary of the Upper Jordan.

“We use Israeli caviar because of its flavor,” Jean-Francois Bruel, executive chef at Daniel restaurant in New York City, told Reuters recently. He described it as “very nutty and buttery” with no aftertaste or muddiness. “We tried some caviar from Italy, from Bulgaria, from Germany, from California here also. But we find the Israeli the best so we work with Israeli caviar.”

One time, says Ben-Tzvi, Karat marketed some less expensive, smaller and paler eggs in Germany. It wasn’t a hit. “Customers recognize our caviar, and they said this could not be Israeli caviar.” For Ben-Tzvi, the second-grade stuff makes a nice breakfast on a slice of bread.

He and Hurvitz had tried a few other fishy ideas before hitting on a winner.

“We were always looking for a supplement for trout since it’s sold only in Israel, and we tried eels, salmon and many other kinds of fish before sturgeon,” says Ben-Tzvi. “I visited most of the fish farms in the world and leaned a little from each one and talked to most of the experts in the world. Like a good Israeli, I combined all that knowledge and made it the best.”

He’s philosophical about the five years he sunk into eel farming. “When you try new things, out of 10 one succeeds. Caviar’s the one.”