Roni Einav made Israeli history in 1999, with a record exit of $675 million from the sale of his 16-year-old company, New Dimension Software, to Texas-based BMC Software.

Since then, the lifelong Tel Avivian has inspired and invested in more than 30 Israeli startups as chairman of Einav High-Tech Assets.

His dramatic days as a pioneer in Israeli high-tech – playing midwife to the emerging field of software, losing and gaining huge sums, managing petulant and sometimes litigious partners – is the stuff of his newly published life story written with Miriam Yahil-Wax, Nordau to NASDAQ –The Evolution of an Israeli High-Tech Start-Up.

The 68-year-old retired army major met with ISRAEL21c in Jerusalem just before an interview at the Israel Broadcasting Authority kicking off an October speaking tour to cities including New York; Washington, DC; Sarasota and Orlando, Florida; and London.

Einav, who worked on top-secret R&D to give Israel an edge on the battlefield, learned early on that Israel’s greatest strength is its human capital. “Brain-paper-pencil turned out to be an effective weapon system,” he writes.

Still, it takes extraordinary vision and guts to turn penciled ideas into money-making ventures. Einav puts it this way: “Successful entrepreneurs are revolutionaries whose burning self-belief and ability to break with convention enable them to move mountains.”

The first mountain Einav moved was the one blocking his advancement from his humble beginnings on Tel Aviv’s Nordau Street. His hard-working Polish immigrant parents wanted him to leave school at 15 to help support the family, but young Einav convinced them to let him graduate high school and apply to the Technion-Israel Institute of Technology.

Yet he internalized his father’s insistence never to be a “hired hand.” Einav was going to make it on his own, even if that meant taking risks.

“In a way, Israelis are educated differently than, say, Germans or Americans,” he tells ISRAEL21c. “Improving the world, for Israelis, is a way of life. Entering situations of uncertainty is less traumatic because that’s life here.”

Capitalizing on cultural differences is one of Einav’s hallmarks. “The society you’re living in influences your abilities,” he says. “Whenever I can, I mix people from different countries in my companies because everyone brings a different brain to the operation.”

He set up his first company, Einav Systems, in 1972, with a logo designed by his wife, Matia, to whom he has now been married for 43 years. His business stationery was printed on his father’s printing press. He scored some major clients, including the IDF.

“The size of the market in Israel is ridiculous,” he says. “If you are born here, you know that only Tnuva [dairy conglomerate] and the army and maybe Egged [bus cooperative] are organizations that are in some kind of global size. If you want to be significant in anything at all, you need to branch out of Israel.” 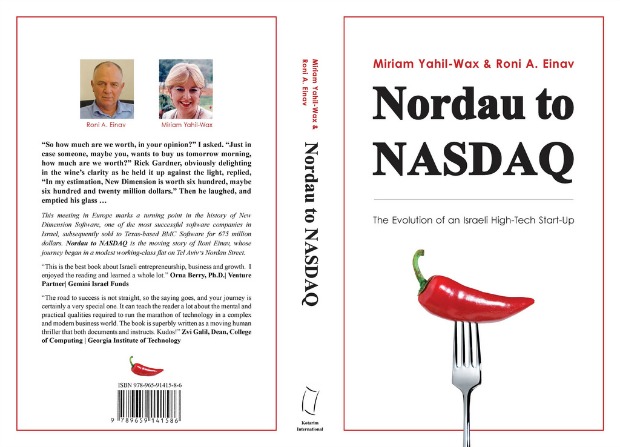 And so in 1984 he sold 26 percent of what had become Einav Computer Systems for $13,000 to an Israeli woman living in California. Her job was to help find an American distributor for the revolutionary management software products being churned out in Israel by Einav’s main subsidiary.

After many twists and turns along the way, this gamble paid off big. And the boy from Nordau Street struck it rich.

“The business world is dynamic and chaotic, and chance plays a leading role,” writes Einav. “The first quality a businessperson needs is the belief in dreams, the second is the courage to improvise, and the third is the willingness to lose.”

Bestowing the benefit of his experience

Since 2000, Einav has continued to co-establish new companies. “In any given moment I am busy with five or six or seven,” he says.

He looks for a management team committed to an idea that potentially contributes significantly to business and humanity – “not just networking people or distributing songs or gambling,” he says. Most of his portfolio companies are in software.

“But sometimes there are some strange deviations. The strangest at the moment is related to the fact that 25-30% of young children do not eat the yolk of the egg. We are working for three or four years now to mix the white and yellow inside the shell and sell it raw or ready-boiled, or alternatively to sell an appliance to do the job in the kitchen.”

Speaking of kitchens, the third of Einav’s four sons is a nutritionist heading his own startup called Kitchenbug. Dad was happy to invest in this free service that analyzes recipes for keywords, numbers and measurements, automatically providing nutritional information and many other features.

His oldest son, now 42, teaches economics at Stanford University. His 39-year-old son is CFO at SafeCharge, a global online payment processor; and the “baby,” at 29, is with the video-streaming optimization site Qwilt, which was one of Israel’s biggest startup success stories of 2011.

“Family is critically important, and one usage of my money was to create trusts to support my immediate and wider family in education, and we succeeded in transferring this to our kids,” says Einav, who has eight grandchildren — five in Israel and three in California.

Einav often lectures on college campuses in Israel and abroad, coming away convinced that most students don’t want to hear about “the conflict,” the Holocaust or religion.

“Youngsters all over the world are not interested in Palestinians and Israelis,” opines Einav. “Let’s talk about high-tech and Kitchenbug and music – all the smart things Israelis are doing. I think they will pay a lot of attention to that.”