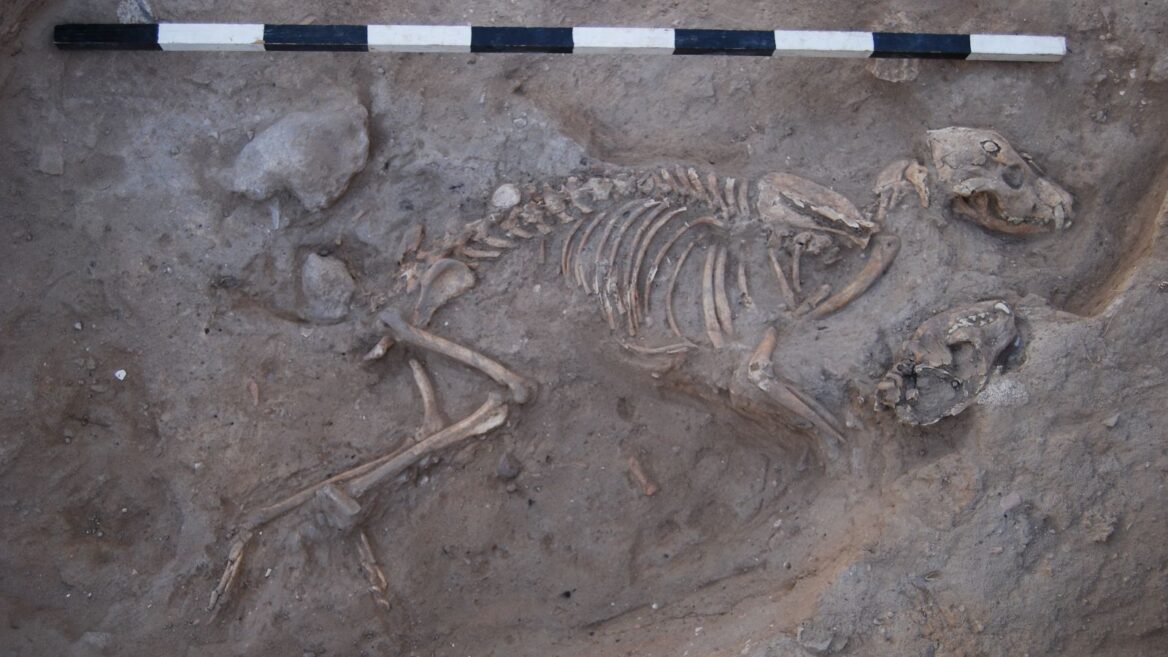 A dog buried in Ashkelon at the time of the Persian Empire leaves modern-day researchers flummoxed. Photo courtesy of the Leon Levy Expedition to Ashkelon

There’s nothing we like more than a good mystery. So imagine our delight when we found out that there’s a quirky one that’s left archeologists scratching their heads for almost 30 years.

One that involves dogs, lots of dogs. To be exact: 1,400 ancient dog graves scattered around the Israeli port city of Ashkelon.

Back in the fifth and fourth centuries BCE, Ashkelon was part of the Persian Empire. The bustling port city was a hub for massive international trade. It was occupied by the Phoenicians, who were associated with the vassal kingdom of Tyre up in what is today Lebanon.

“During this time, when it’s a Phoenician city that’s part of the Persian Empire, there’s this strange thing that happens in Ashkelon,” explains archeologist Prof. Daniel Master of Wheaton College in Illinois.

“We have dogs that are buried in every open space, every courtyard, every street, every field. We just find so many of them.” 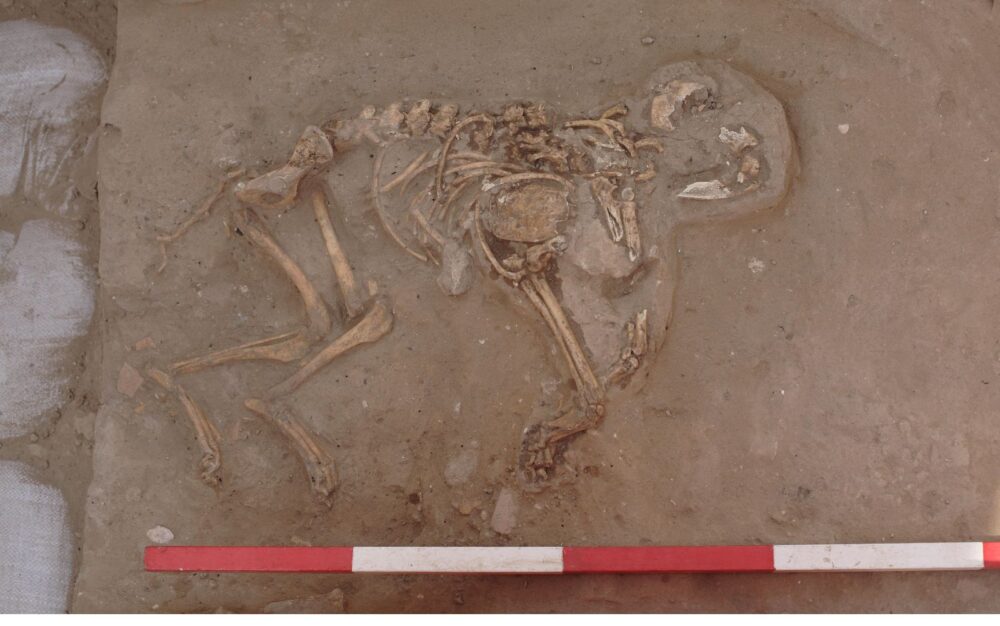 The ancient skeleton of a puppy buried at Ashkelon. Two-thirds of the graves discovered belong to puppies. Photo courtesy of the Leon Levy Expedition to Ashkelon

At first, they thought it was a curiosity, “and then after we found 10 or 20 we thought it might be an annoyance. When we found hundreds, we realized it was a phenomenon. It was a fundamental part of life in Ashkelon,” he adds.

And yet, despite having excavated the Ashkelon archeological site since his student days in the early 1990s, and even leading the digs for several years, he’s not quite sure why this was the case.

“Once we got enough dogs to be able to look at them as a whole, we could start building a pattern of when they died and start to see the mortality profile of the dogs,” Master explains.

“One of the first observations is that these were street dogs. It doesn’t look like these were pets, because you wouldn’t have as many young dogs dying,” he notes. 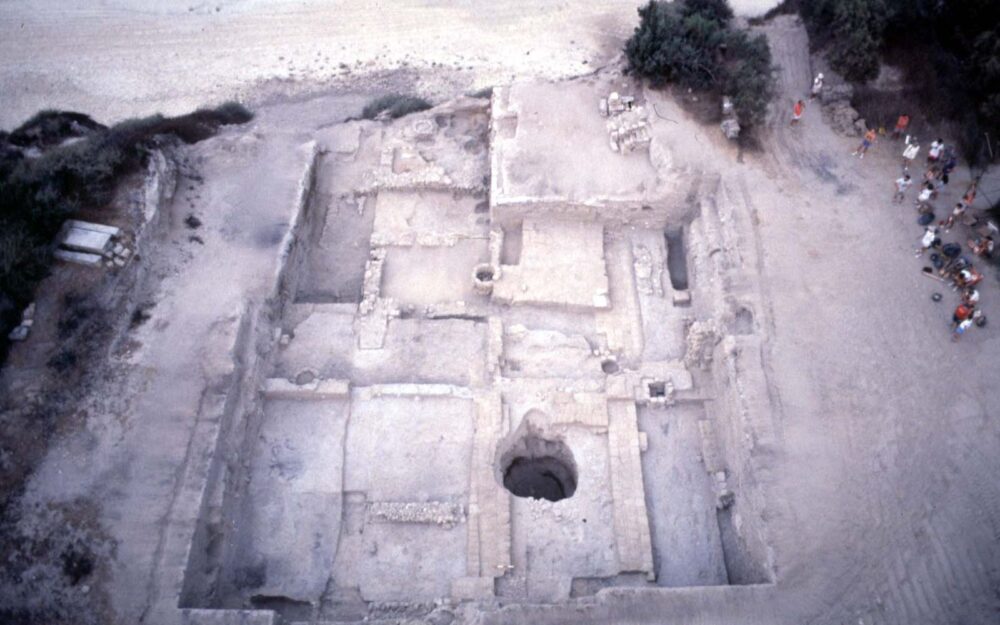 The dog cemetery during excavations in 1989. Photo courtesy of the Leon Levy Expedition to Ashkelon

“The second thing we noticed, there was no evidence they were cared for particularly in life,” he adds.“There’s no evidence that they were fed in life in a special way. We never found that they were buried with any accessories, something that shows that someone who does the burying cared for the animal. Every time a dog died, they dug the pit, put the dog in the pit and covered it over.”

Why were they buried?

“We still don’t know whether there was a religious significance to this, whether it was simply a question of hygiene. My favorite hypothesis is that this was just urban life and hygiene,” says Master.

There isn’t any evidence that they were diseased, he adds.

“If it were a disease, we might have expected a whole bunch of dogs to die at once. It wasn’t a situation where you have a mass grave. It seems that the most important thing was that they were buried once they died. We’re still not quite sure why,” Master says. 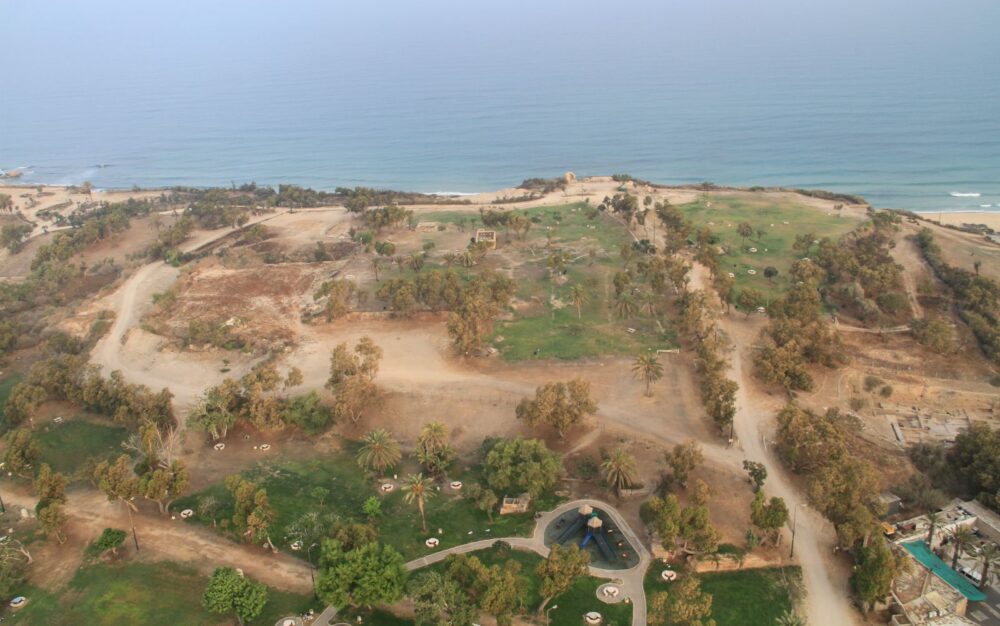 The location of the dog cemetery in Ashkelon. Photo courtesy of the Leon Levy Expedition to Ashkelon

Master isn’t alone in his confusion. Zoo-archeologist Prof. Deirdre Fulton from Baylor University in Texas started working at Ashkelon when she was a PhD student in 2007. She has examined the bones of the dogs buried there.

“There’s no clear evidence that the dogs had been killed. They seem to have died naturally based on the mortality profile – two-thirds of them are puppies, one third adults,” she notes.

The buried dogs were found with their heads and tails tucked in, as if they were sleeping.

Fulton admits she does not know why the dogs were buried. 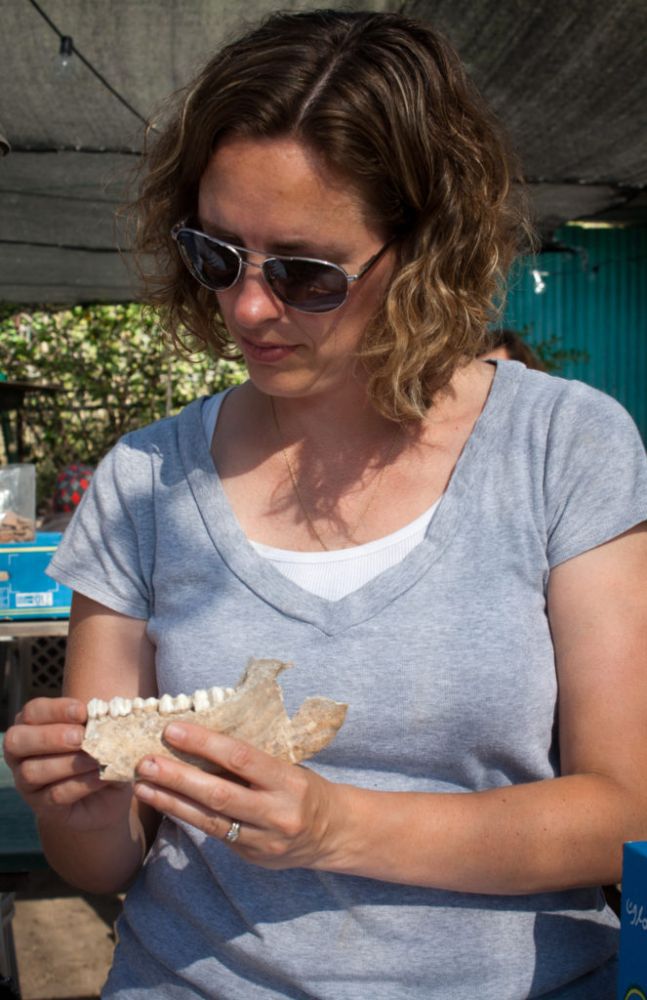 “The best evidence for any type of practice is an ancient text or inscription, but we’ve never found anything like that,” she says.

“These dogs had an association, they are buried in places near occupations, near where people are living and they are burying them,” she adds. “I would say that the way they tucked their heads and tails shows that they do have some sort of connection to the animal. There’s something more to it.”

The Ashkelon dog graves are the largest such sample in the Levant, so the archeologists don’t even have anything to compare it to – the second-largest instance of this phenomenon numbers only 30 graves. So it’s small wonder that it has captured everyone’s imagination.

“I think it’s really interesting when we see human-animal interactions on this scale, when you have 1,400 dogs buried by a town or small city. It shows that they are indeed interacting in a way that’s not just for food but something more,” Fulton notes.

“We don’t often see ancient archeological excavations with animals,” she adds. “It’s a relatable find in modern times, particularly for people who like animals and dogs.”

Fulton sums up: “It’s a bit of a mystery why the Ashkelonians in the Persian and Hellenistic periods started burying the dogs. It could be that these are just dogs that would wander the village, or house dogs or guard dogs. I really wish we had an answer for this.”

Unfortunately for those wishing to witness the unique phenomenon, the buried dogs aren’t accessible to the public. After being excavated, they were examined for research purposes and then stored at warehouses at the Ashkelon site, where they now remain.

UNCOVER ISRAEL - Get the ISRAEL21c
Weekly Edition free by email
Sign Up Now!
Bring Israel's story to life.
Millions of people around the world rely on us to gain a deeper understanding of Israel. We are the trusted source for original content you won't find anywhere else.
You can make a difference. Donate today to support journalism that brings Israel’s story alive.
SUPPORT ISRAEL21c
Read more on:   Culture, Archeology, dogs, ashkelon