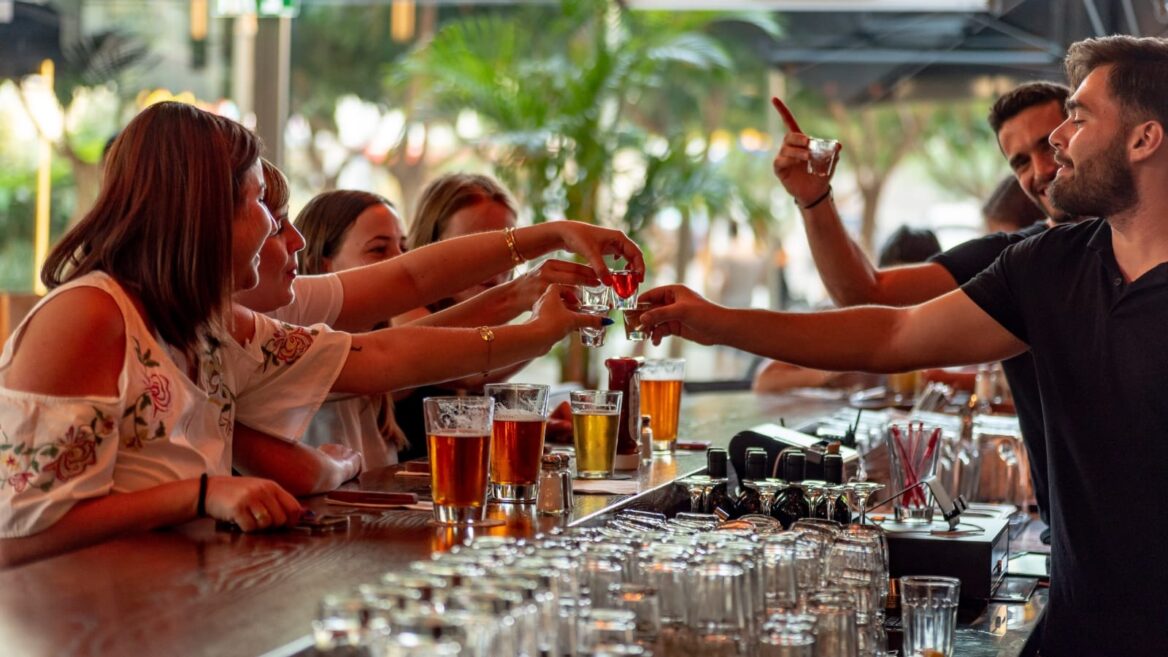 Two years after American immigrant Ephraim Greenblatt started selling homemade beer in his living room in a weekly salon experience, he raised a glass to celebrate Hatch, the bar he opened in Jerusalem’s Machane Yehuda Market.

Since its launch in 2017, this watering hole has burgeoned into a bustling sit-in magnet, dishing up chicken wings, shawarma-flavored snacks and dirty fries smothered in savory sauces, jalapeño peppers and meat among many other popular plates pairing well with his microbrews.

The scion of a rabbinic dynasty in the United States, Greenblatt is also the descendant of established meat and wine purveyors abroad. His ancestry lends inspiration to his current Jerusalem trifecta. 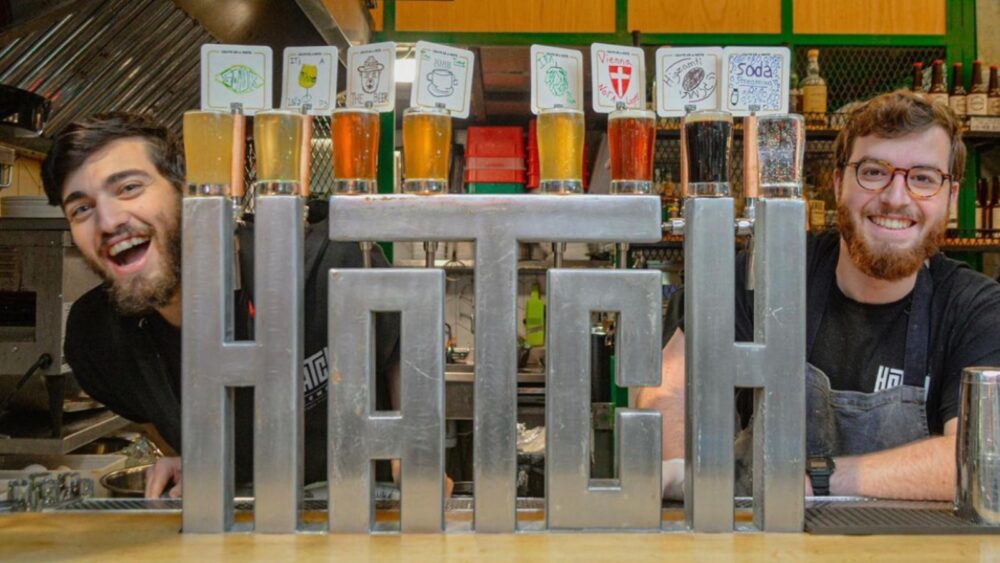 Beer on tap at Hatch, Jerusalem. Photo courtesy of MBZ

After “hatching” Hatch, in January 2020, Greenblatt created a brewery in the southern Talpiot neighborhood, which offers tours by appointment. The next month, he launched a sit-down restaurant, Shmaltz by Hatch, in the northern and largely religious neighborhood of Ramat Eshkol, which pivoted into catering after the pandemic hit in March. A turkey club served up at Shmaltz by Hatch in Jerusalem. Photo courtesy of MBZ

Recently profiled on Israel public television, Greenblatt is among the many faces of Israel’s enthusiastic craft beer industry.

“There is a lot of recovery from the challenges of the Covid period,” says Greenblatt, who adds Israeli restaurants plummeted from about 14,000 pre-corona to a current estimate of 9,000. He recently launched an e-commerce site to add another revenue stream.

In many ways, Hatch’s resilience represents the entire sector, which has grown from a tiny niche into a vibrant though still relatively modest innovation.

Like Hatch, some enterprises, such as the Jem’s national beer chain, creates microbrews, retailing them by the bottle and providing them fresh on tap at 14 eat-in venues.

What’s most surprising is that all this is bubbling up amidst a significant absence of one critical ingredient.

“In Israel, there is no real beer culture,” says Leon Schwartz, owner of downtown Jerusalem’s Birateinu, whose name plays on the dual meaning of the Hebrew word for “our capital” and “our beer.”

This purveyor of more than 100 different bottled beers from home and abroad also has 20 to 30 beers on tap, including its own eponymous brews. Birateinu also runs a bar pub and beer academy.

A 2019 USDA report cited the Israel craft beer industry then represented a mere two percent of the country’s entire beer market, then valued at $150 million. Predictions expect that figure to grow, with a rising demand for microbrews.

The industry’s many players are the ones “building Israel’s beer culture,” Schwartz says. “When I started seven years ago, people would always ask for a mainstream beer, and were surprised we don’t serve them. Now they come for specialty and craft beers.”

Birateinu is current collaborating with Hatch and Halutz Chadash (New Pioneer), the label of Beit HaBira, a Beersheva enterprise with a similar business model as Birateinu. This summer, the trio plans to release Kveik IPA, an Indian pale ale named for a specialty Norwegian yeast that produces a clean flavor in half the time as most strains.

Such collaborations characterize the climate among Israeli brewers, borrowing, perhaps, from the history of beer as a socializing drink “of the people” for millennia.

“Each player has its influence on the beer recipe but together we can brew bigger batches and can sell it at more affordable prices to consumers than we could otherwise,” Schwartz says. “And because we all market it together we can reach more people.”

Jeremy Welfeld, the founder of Jem’s pub chain, which borrows his nickname, agrees. “What’s special about this industry, everyone tries to support each other,” he says. 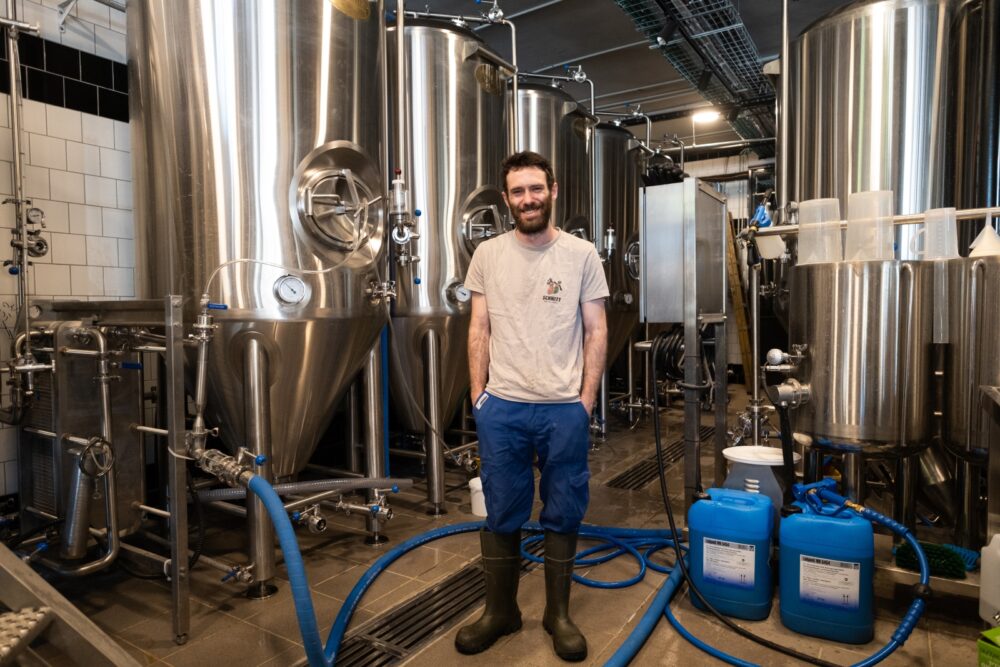 That collaborative spirit extends to festivals, including the recent Jerusalem Craft Beer Fair at the First Station. Produced by Birateinu, it featured about a dozen booths from brewers from the Golan to the Arava. This variety is all the more astounding given its context. Unlike California, the birthplace of craft beer, Israeli cultural norms don’t support heavy beer consumption.

“Israelis will drink one or two beers at a party and that’s it,” Welfeld says. “As opposed to British, Irish, Czechs or Germans who can sit down and drink a six-pack at a time. Americans drink over 120 liters per capita per year. Israels average 17. The market here is so small, with 8 million people. If you want it to be fresh, you want to make sure that beer moves.”

Out of the world’s 190 countries, Israel ranks 153 in beer consumption, says Nadir Luzon, a managing partner of Beer Bazaar. 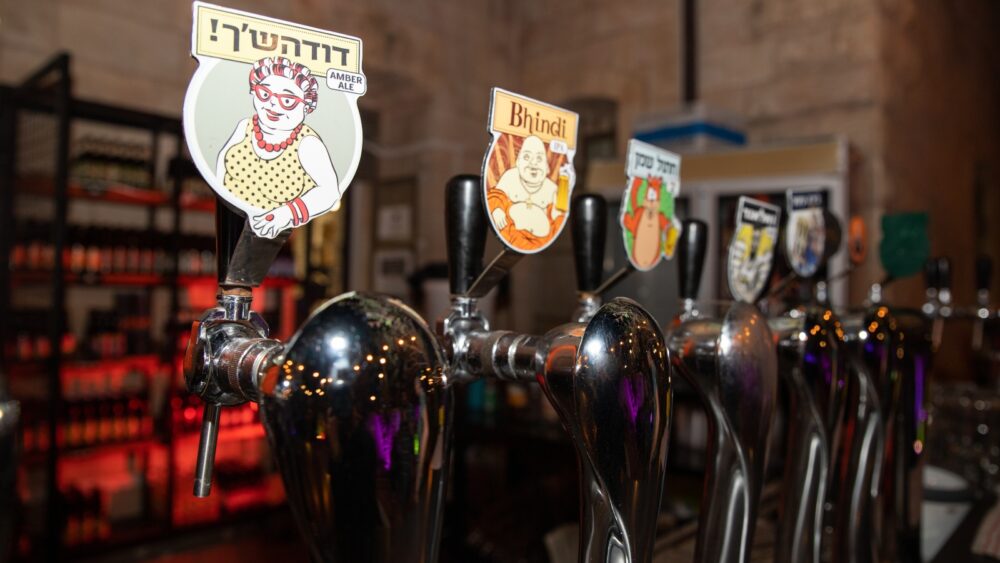 Beer on tap at BeerBazaar. Photo courtesy of BeerBazaar 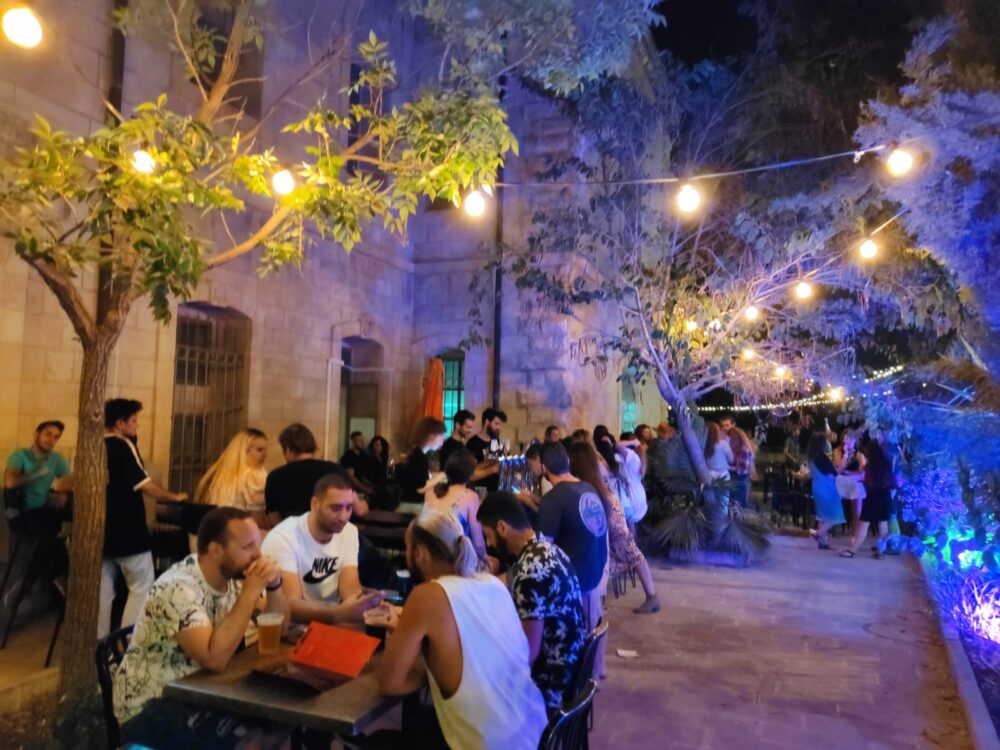 Like its competitors, Beer Bazaar sells bottled product throughout the country and contracts its brewery to other businesses to produce distinct brews under their own labels.

Personalities in the business

“I always wanted to work in the beer industry,” Lipkin says. “The stars aligned perfectly.”

Like Lipkin, Jem’s Welfeld also long fostered a desire to work in the industry. “The first time I tried a microbrew, it was a blueberry ale at a small pub in Baltimore in 1989,” Welfeld said. “It blew my mind. And I decided I wanted to bring the experience of fresh craft beer to Israel.” 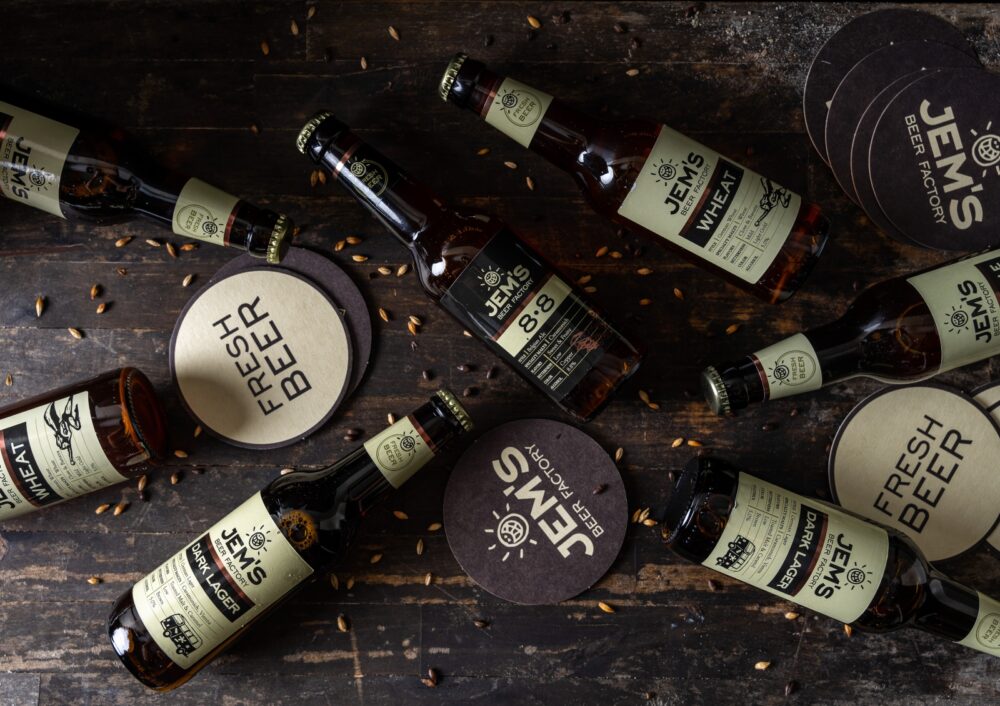 Jem’s has steadily been growing its beers and eateries throughout Israel. Photo by David Moyal

A former usher at the White House in Washington, DC, Welfeld initially immigrated to Israel in 1984 and served for three years in the IDF before returning to the States to earn degrees in culinary arts, hospitality management and advanced brewing sciences at Siebell Institute of Technology, the oldest brewing school in the US established in 1868.

He made aliyah a second time in 1999. Although it took 20 years, he finally realized his dream by opening Jem’s Beer Factory in Petah Tikva in 2009 with one partner; that has since expanded to two.

In addition to a savory menu featuring signature sausages, panini, burgers and Denver steak, Jem’s serves seven core beers on tap plus limited runs, such as pineapple for Sukkot and a hoppy wheat beer for Hanukkah.

From their initial five styles of beer and sales of about 5,000 to 10,000 liters a month, their output has increased ten-fold. In addition to 14 kosher locations from Beersheva to Caesarea, two more Jem’s are in the pipeline: Petah Tikva No. 2 (both separate from the brewery) and Jerusalem.

With a history dating back 5,000 years to the Sumerians of ancient Mesopotamia, beer is everyman’s drink, combining water, malt, hops and yeast. The starchy malted barley contains enzymes that break down its complex starches into simple sugars.

Hops add bitterness and aroma to offset that sweetness. Yeast feeds on the sugar produced by the malt enzyme to create fermentation and alcohol.

“You take four ingredients and there are millions of beverages you can make. We all use the same ingredients and every beer is different,” Welfeld says. “It’s a cosmic ballet. The microbiology and the chemistry are amazing. You have all these players working for you.”

The difference between craft, microbrew and boutique beers versus large commercial products, such as Goldstar and Carlsberg, is simple. “Our beers are fresh, unfiltered and unpasteurized,” Welfeld says. “That’s what differentiates microbreweries.”

Promoting its brews as “true Israeli beer,” The Dancing Camel traces the recipe for its signature beer, Olde Pappa, a strong ale brewed with date honey (known locally as silan), to Rav Pappa of the Babylonian Talmud, circa fourth century. In contrast, its summer seasonal Gordon Beach Blonde Ale, with mint and rosemary, invokes the feel of contemporary Tel Aviv.

One obstacle to the creativity and success of Israel’s craft beer industry is the inevitable: taxation.

“We are taxed at 2.3 shekels per liter, which is extremely high,” Welfeld says, noting those costs are passed on to the consumer, with an eight-pack priced at NIS 99 online. “That’s one of the reasons microbrews are so expensive in this country.”

Another challenge? “Everything is imported, from the grain to the bottles to hops to the caps,” Welfeld says. That not only raises costs. “All that importing is difficult. You have to deal with Israeli bureaucracy at every level.”

Jem’s, for example, imports malt from Germany and England and hops from many countries, including the United States and New Zealand. Only two ingredients remain homegrown: packaging and water.

Even that is rigorous. “We insist on a level of purity which cannot be found naturally in Israel,” Welfeld says. “It is charcoal filtered and undergoes reverse osmosis. We break it down to zero and then re-mineralize it to get as close to English, Czech, American water.”

Such careful controls also distinguish the competition. “Malka and Jem’s are fighting it out to be number one and two craft brewers in the country,” says Welfeld, who maintains ties with his competitors.

“Beer is the beverage of friendship,” Welfeld explains. “We mix a blessing inside for brotherhood, friendship and harmony and people can taste it.”

What’s more, is the spirit of service and helping to provide ways for Israelis to decompress.

“Thank God, we survived corona, we’re here and we’re working,” Welfeld says. “We are happy to serve Am Yisrael [the people of Israel] and be in service to our nation. That’s what we do.”

The Dancing Camel, incorporated in 2005 in Tel Aviv.

Bills itself as Israel’s first microbrewery.

HaDubim, Raanana-area brewers producing about 18 beers including collaborations such as 4.8% Lazy Bear Session IPA, a joint effort with Schnitt.

“Hero Brewery” offering tours by appointment (04-656-7472) and beer garden. Its craft beers include Palma, a gluten-free and kosher for Passover date beer. “Hero as a Cedar” donates profits to Erez, an organization supporting activities for disabled IDF veterans, athletes and children.

Machane Yehuda pub and Shmaltz by Hatch, a sit-down deli-inspired meatery (kosher). Operates a brewery in Talpiot with tours by appointment.

Craft beer workshop producing beers such as Kapara, a 6% ale; 5.9% Kind of Wheat, a Bavarian wheat beer and rye beer; and Embargo, a Cuban tobacco leaf porter that landed a 2014 silver medal at the Global Craft Beer Awards in Berlin. Limited releases include Krembo, a cocoa-vanilla cream stout inspired by an Israeli treat and Mexico 70, a mango-chipotle wheat beer. Tours by appointment.

Western Galilee beer garden operating in Yehiam with a saloon at its brewery in the Tefen industrial area.

A married couple operates this brewery outside Beit Shemesh, producing seven beers available by delivery and in-person, with group tours by appointment (052-233-2591).

Brewers distributing more than 10 beers throughout Israel, including a chocolate stout aged in bourbon barrels; a Special Strong Sour spring-seasonal brewed with fermentation with almond flowers from the Jerusalem hills and a second cultured fermentation with Saison yeast, and a classic Bavarian Weizen with notes of clove and banana.

A joint whiskey distillery and brewery employing a method shared by other brewers: leveraging wooden barrels previously used for aging whiskey to then barrel-age certain beers, which adds aroma and flavors from whiskey and oak to specific microbrews.

To learn more about craft brewing: Supplies for home brewers are available at the Beerdy and Beer and Beyond shops in Tel Aviv, and Birateinu in Jerusalem, which also runs instructional workshops for professionals and home brewers.

UNCOVER ISRAEL - Get the ISRAEL21c
Weekly Edition free by email
Sign Up Now!
Bring Israel's story to life.
Millions of people around the world rely on us to gain a deeper understanding of Israel. We are the trusted source for original content you won't find anywhere else.
You can make a difference. Donate today to support journalism that brings Israel’s story alive.
SUPPORT ISRAEL21c
Read more on:   Culture, Craft beer, BeerBazaar, Jems, Hatch, Schnitt