The Israeli company Qlight Nanotech aims to enhance the quality and colors of LCD TV screens and LED lights while reducing energy consumption.

Its semiconductor nano-crystals with unique optical and electrical properties could be a panacea for next-generation flat-panel displays and could double the battery life of your smartphone, claims Qlight CEO Shlomo Amir.

The forward-thinking company is working full speed ahead on its nano-sized crystals for screens and mobile displays –– promising an environmentally friendly alternative to dangerous chemicals and energy-guzzling technologies.

Qlight’s nano-crystals, originally developed at the Hebrew University in Jerusalem by chemist Prof. Uri Banin, can convert light from the blue or UV wavelengths to any visible wavelength, allowing for “unmatched color and wavelength accuracy while displaying high efficiency.”

In partnership with the German pharmaceutical and chemical giant Merck, Qlight is already making headlines even though it is about two years away from putting a product on store shelves.

Here is the difference between a regular display and one powered by Qlight’s technology.

“Our material radiates light out at some specific wavelength of light. The exact wavelength is determined by the size, structure and compound which builds them,” says Amir. “We can control that.”

Nanotechnology is an emerging science that focuses the uses of very tiny particles — no bigger than 100 nanometers. Qlight’s crystals fall into that range, at four to eight nanometers. They are so small that they can only be seen with a special electron microscope.

According to Amir, 90 percent of liquid crystals for TVs and displays now on the market are supplied by his business partner Merck, which has owned half of the company since 2012. So the business potential can be massive. 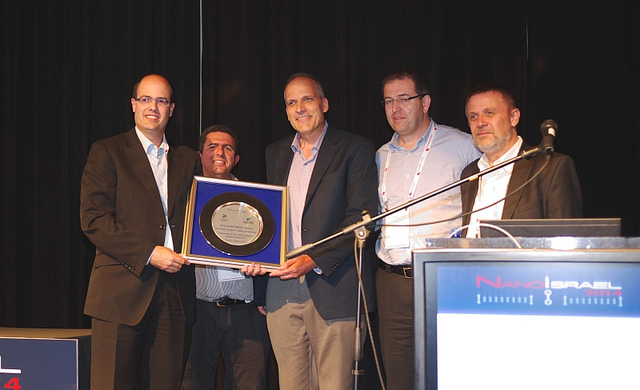 Qlight owns patents on several of its unique crystals, with IP protected worldwide. “The potential applications are numerous, but we’ve chosen the display market. In a few years, probably not too many, your screen will be based on quantum rods instead of liquid crystal or OLED,” Amir predicts.

The nano-crystals are really just “very small crystals, made from semi-conductive materials,” says Amir. “The key is their design in order to get quantum dots. The material created exhibits a phenomenon which makes them phosphorescent. They can glow.”

Integrated within existing manufacturing processes, Qlight nano-crystals could also be used one day in 3D printers, allowing people to print their own display screens.

The key is the process, not the materials. Qlight could make use of a variety of inert elements, such as zinc, sulfide or selenium as a base material. “The materials are well known,” says Amir. “The problem is how do you synthesize and structure them so they have the right properties, like to radiate blue light at the right color.”

What does this mean for the average consumer? In the near future, expect the reds and greens on your TV and phone to “jump out of the screen,” Amir says.

The technology can work well with tomorrow’s much thinner and flexible screens, as well.

A future application for the Qlite nanocrystals is in home lighting, where the price of LED bulbs is coming down. It could also be used on banknotes to emit a certain “signature” spectrum of color, making forgery next to impossible.

Since day one, Qlight has been supported by the Office of the Chief Scientist in Israel. The company of 16 is growing fast.

More on Qlight can be found here: www.qlightnano.com. For more on the Banin research group, see http://chem.ch.huji.ac.il/~nano/