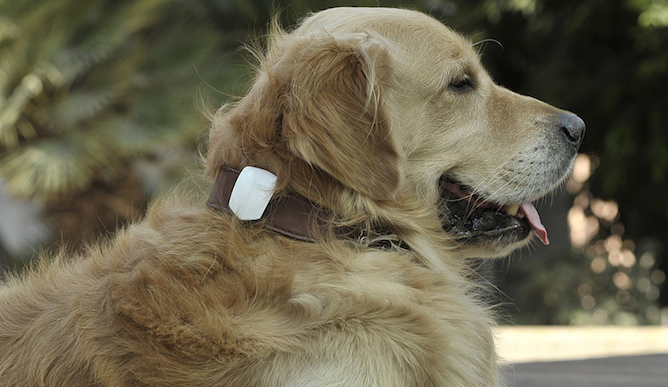 “After we break the ice, we can bark,” says Yonatan Dror, CEO of a new Israeli pet chip monitor company called Oggii. This would sound like a weird proposition if Dror hadn’t first developed a company that attempted to decode the secret language of dogs.

After securing financing from a pet-loving “angel” friend of his, and delving into the idea, speaking Dog proved more challenging that Dror thought. So he moved to another language: decoding movement patterns in dogs to determine if they are healthy.

You can’t take blood pressure or heart rate as reliable indicators of canine health, Dror tells ISRAEL21c. His company Oggii (previously Oggway), uses a chip and patented algorithms to correlate pet movements with possible problems such as ticks, skin allergies, seizures, arthritis, poor joints, brain damage and even ear infections, which account for 30 percent of all visits to the vet. Pet owners receive action alerts like “diet” or “go to the vet.”

“Using algorithms, we are detecting a variety of patterns like dog walking, running, sleeping, drinking, playing and so on. We also look at head shaking and many patterns that we analyze over months,” Dror explains.

His seven-year-old Golden Retriever, Anna, is now testing out the pilot Oggii chip, expected to go commercial in about two months.

There are some conditions, such as heartworm or cancer, that Oggii can’t detect directly, but it can alert a pet owner that something is wrong. “Cancer usually manifests in movement and lower activity levels,” says Dror.

The system compares movements of the dog to itself over time, to other dogs in the “cloud” connected to and using the Oggii chip, as well as to averages and expected behaviors in the dog world at large.

Visits to the vet are costly, so pet owners usually postpone until conditions have developed in more serious ways, says Dror. Using a $30 Oggii chip could save dog owners money, and the dog unnecessary suffering.

America’s dog trainer darling, an Israeli called Tamar Geller, is on the board of Oggii.

A Canadian-Israeli vet who hadn’t heard of the invention before also thinks Oggii is a unique and exciting idea. Dr. David Cohen runs the clinic Vets4Pets in Herzliya and Jaffa, Israel.

He tells ISRAEL21c: “I have heard before of single-parameter devices that are being tested to measure heart rates and blood pressure on dogs. But nothing like the Oggii.

Cohen says he depends on pet owners to provide background info on their pets to help with a diagnosis. “These days, many pet owners are not home as much, are out working, or simply aren’t observing their pet in a detailed enough way for me to get clues from them,” he says.

“The Oggii would help tremendously; we could sit with pet owners and analyze data together, and put heads together as to why their dog is barely moving around in the past week, or why it is circling so much, or draw to their attention that the Oggii noticed their dog is scratching himself a lot, even though the owner, when asked if their dog is itchy, says no,” Cohen explains.

“One of the biggest challenges veterinarians (and pediatricians) face, is the patient being unable to say where it hurts and give other relevant history. It sounds like the Oggii would be the voice for the patient.”

As for practical use, there is no need to charge the long-life battery. After a year when the battery drains, you just replace it.

Idea struck while out strolling

Dror is an architect who got the basic idea for Oggii while strolling to work one day. “We wanted to translate what dogs are saying. It’s a little bit out there,” he says.

“I turned to someone I know with a lot of money. And he invested in the idea. So I had money to make a lot of mistakes.”

Dror started to investigate this area and saw there were a lot of serious studies on dog health that could be taken in a commercial direction. “I started to think about to how to create a product that could detect health problems in dogs.”

Since then, other companies have floated similar solutions, but Dror says they cost $100 to $150 and only measure movement. When these other systems collect data, there are no clear action items for pet owners to take.

Oggii is in no way connected to other pet and animal monitoring companies in Israel, like AfiMilk, which makes milk monitors for the dairy herd, or Veterix, which has developed a diagnostic capsule to sit in a cow’s gut.

In Oggii’s case, the coin-sized chip is worn on the collar and from there it transfers information via a zero-energy Bluetooth 4 technology to an owner’s cell phone up to four times a day. This information then goes to the cloud, where it works its magic to let you know if Fido or Anna might be sick. Or better –– if they are healthy.

“We are giving specific advice so you can go and do something with it,” says Dror.

Designit, Europe’s biggest brand innovation company, has partnered with Tel Aviv-based Oggii. Financing comes through angel investors, as well the incubator TheTimes. The company was founded in 2011 and will seek additional financing sometime in next year.

Dror is now talking to some of the companies with the biggest bark and bite in the world market: PetSmart, Walmart and Procter & Gamble.

Now that’s something to ruff about.