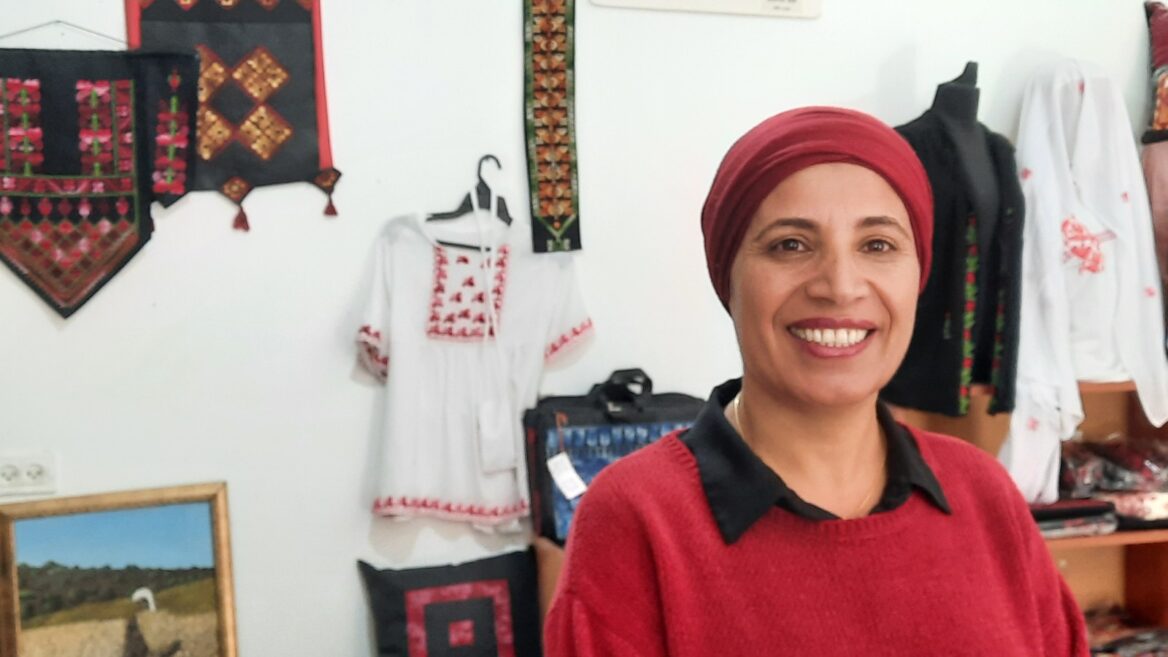 Amal Al-Sana fought for her rights in Bedouin society. Photo by Judith Sudilovsky

Amal Al-Sana was the fifth daughter of a Bedouin family in Israel’s northern Negev Desert. Another daughter in a family of girls was considered a tragedy in this patriarchal society.

But Al-Sana became a rebel. She fought for the choice pieces of meat usually given to her younger brother. She herded the family’s sheep from the age of five, allowing her wild spirit to grow in the freedom of the desert.

“As a woman we have no place, but I can’t talk about rights without talking about the context we were born in,” she said.

“As the fifth girl I was a big challenge for my parents, but I did not want to take that role of pity. I was ready to fight for my rights. I knew that if I did not fight for the little things, I would not be able to fight for the big things. I wanted my community to recognize my potential.”

Living in a precarious position within her society, and as a minority in Israel whose nomadic lifestyle was in direct conflict with modern urbanization, she learned to juggle those very big challenges.

It was her grandmother who taught her what it means to be a feminist, she said. 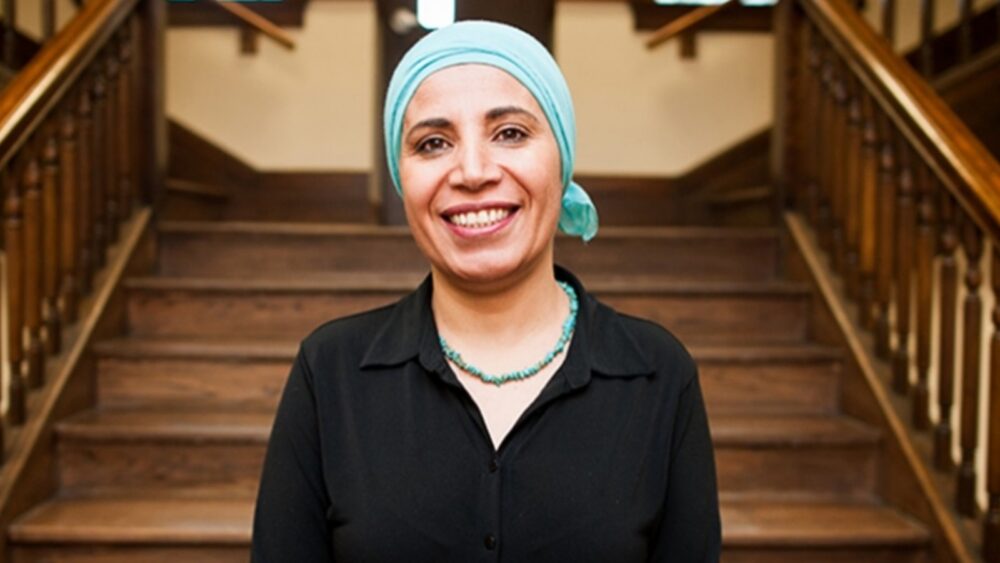 Al-Sana, now 49, went on to earn a doctorate from Canada’s McGill University in community organizing and has won numerous awards.

She credits her days shepherding the family’s flock of 50 sheep, three cows, and one donkey as being influential in teaching her leadership and management skills.

Today she is among the numerous women in the Negev who are creating economic opportunities for women, following sometimes seemingly impossible dreams. A closeup of an item make by Desert Embroidery. Photo by Judith Sudilovsky

As a teenager, Al-Sana helped found the Ajeek Arab-Jewish Center for Empowerment and Cooperation, and later cofounded the Desert Embroidery Project in her village of Lakiya aimed at employing and empowering local women through their traditional embroidery.

At first, she admits, the founders didn’t understand the importance of the connection between the older women and their embroidery. They initially taught the women to make modern jewelry.

When the women refused to sell these pieces at craft fairs, Al-Sana complained to her grandmother. The older woman took one look at the jewelry and declared that she too would have been embarrassed to sell it.

“This is not ours. It is ugly,” Al-Sana remembers her grandmother saying. “I would not buy this and I would not sell this.”

She told the headstrong Al-Sana to start from where the women are—something that belongs to them.

“So we started from their strength—their embroidery, which tells their story. It was a chance to see how women experience themselves through their embroidery, in a place where they can meet and talk,” said Al-Sana, noting that as Bedouin society became more sedentary, the women lost opportunities to meet and talk alone as they drew water from community wells far from the prying eyes of others.

The center began with seven women and grew (pre-Covid) to include 120 members from Lakiya and surrounding communities.

Though many Bedouin women of the younger generation are pursuing higher education, Desert Embroidery enables older women to work from home, an especially important opportunity for those in unrecognized villages.

The pay is not high, but the center also supplies those who need it with some clothing and food. Some members have sent their daughters to university using the money they earned.

The visitor center in Lakiya was a popular stop for local and international tourists coming to the Negev. Though they have an online presence, the personal contact with the women doing the embroidery is always more effective in making sales, said Al-Sana.

The embroiderers are paid whether sales are made or not, but income from the sales helps in maintaining the center. 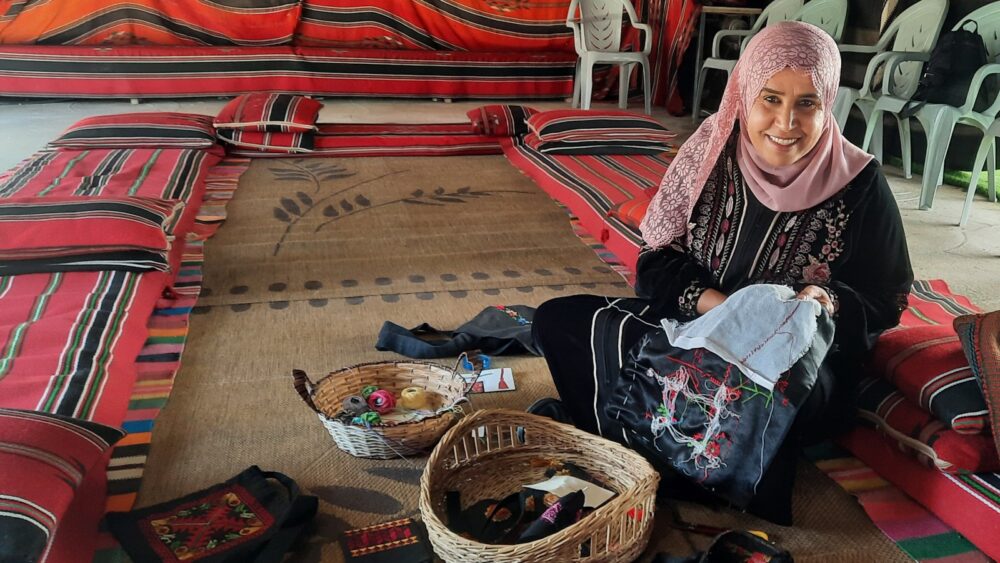 Houda Sana, 50, one of the early members of Desert Embroidery, learned to embroider from her mother, who learned from her mother. She most enjoys making the traditional Bedouin embroidered dresses that have become popular even among young women to wear to weddings.

The colors of the threads have significance: red indicates the woman is married, blue is for widowed or divorced women and purple is for single women.

“We come here once or twice a week, and we come back with our work and more knowledge and more self-confidence,” she said. 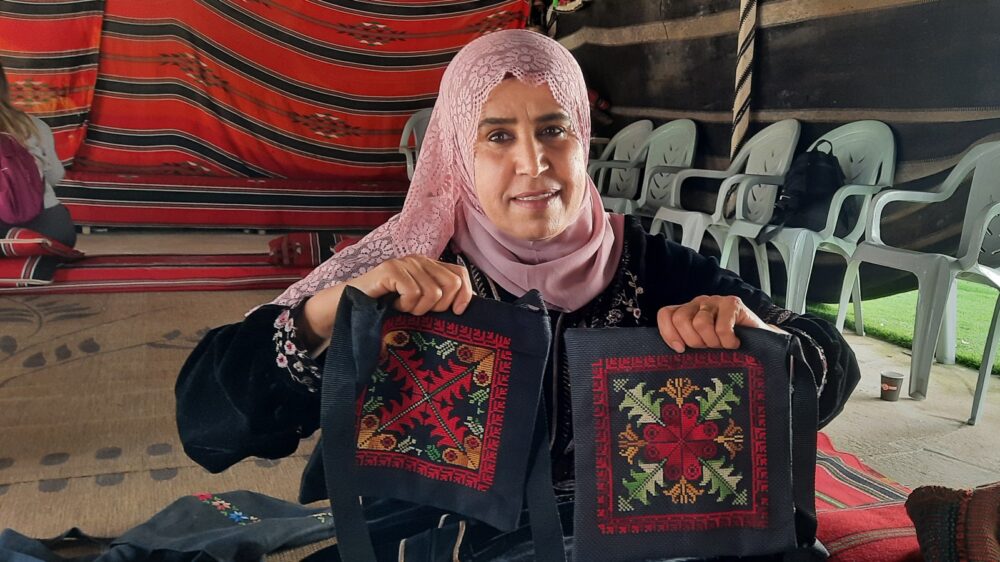 Houda Sana with some of the bags she created at Desert Embroidery. Photo by Judith Sudilovsky

Sitting on cushions in the center’s visitor’s tent, she pointed out two bags with different flowered designs. One, she says, is a traditional design with a flower in the middle symbolizing the sheik with his family around him. The other is one the women from Desert Embroidery designed with the women in the middle.

“We decided we wanted something for ourselves too,” said Sana. “I respect the sheik, but we put ourselves in the center.”

UNCOVER ISRAEL - Get the ISRAEL21c
Weekly Edition free by email
Sign Up Now!
Bring Israel's story to life.
Millions of people around the world rely on us to gain a deeper understanding of Israel. We are the trusted source for original content you won't find anywhere else.
You can make a difference. Donate today to support journalism that brings Israel’s story alive.
SUPPORT ISRAEL21c
Read more on:   Social Action, People, Bedouin women, International Women's Day