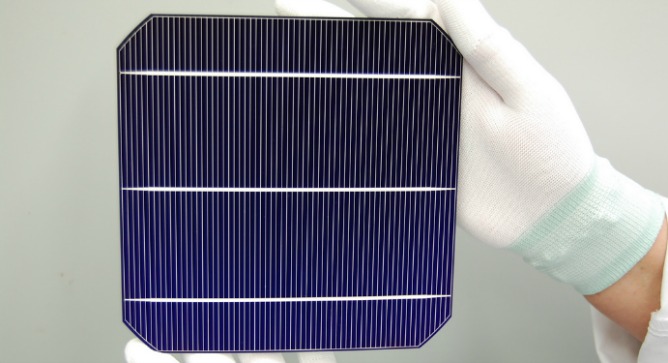 The bSolar bifacial solar panel is an old idea whose time has come.

The B-side songs on old vinyl records were never expected to be quite as popular as the chart-toppers on side A. But a new Israeli solar energy company hopes to score a hit with the untapped potential from the B-side of a bifacial solar panel.

“B” is also for boron, the chemical element that makes bSolar panels 20 percent more efficient than standard one-sided solar panels on the market.

Founded in 2007 and with a $10 million investment, $3 million of which comes from Genesis Partners, bSolar bought a flailing 30-megawatt solar panel production plant in Germany where it is now manufacturing its bifacial solar cells.

Though this is not a new idea, bSolar has a secret weapon to give it an edge: The company was co-founded by the original inventors of bifacial solar cells 35 years ago in Russia, says bSolar’s CEO Yossi Kofman. The idea was to create a two-faced energy source for satellites, but until recently the cost of production was prohibitive.

These two Jewish Russian scientists immigrated to Israel 20 years ago, and when Kofman heard about their ideas and the business potential, bSolar was created. “We are not the first to produce bifacial solar panels. But we are the first to mass-produce them at such a low cost,” Kofman tells ISRAEL21c.

Boron is the key

Today the company employs 40 people between the hubs of Jerusalem, where the company is headquartered, and Heilbronn, Germany, where its first production plant is located. 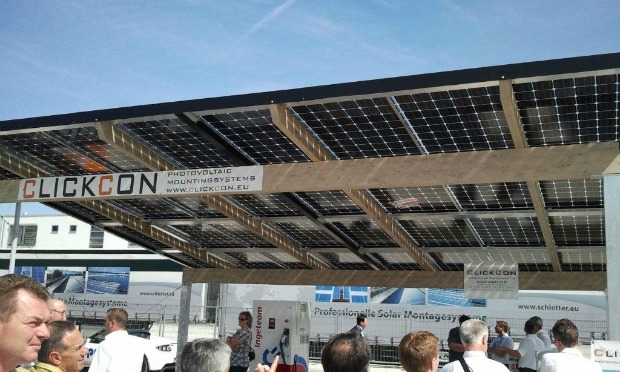 The bifacial solar panels in an installation.

The company is currently fulfilling orders out of Germany, including for a 700-kilowatt ground-mounted solar power plant in Japan.

While the cost of the bSolar product is a bit higher than a one-sided photovoltaic panel, says Kofman, it can produce at least 20 percent more power. This meaningful difference in efficiency could justify the cost when space is limited, such as on building rooftops or when photovoltaic panels are integrated into the building envelope itself.

Using a thin layer of boron, instead of the traditional bottom aluminum layer, the cells can collect the reflected sun from clouds or off the ground or rooftops through the bottom of the panel, while improving efficiency of the top, or A-side, of the solar cell.

But how to coat the bottom of the panel with boron so that it works well was no trivial matter. And this is the proprietary “element” to bSolar’s success.

So far, demand seems to be greatest for rooftop panel installations, says Kofman. As for business objectives, bSolar will sell complete solutions and also the cells themselves to other panel installation and integration companies. 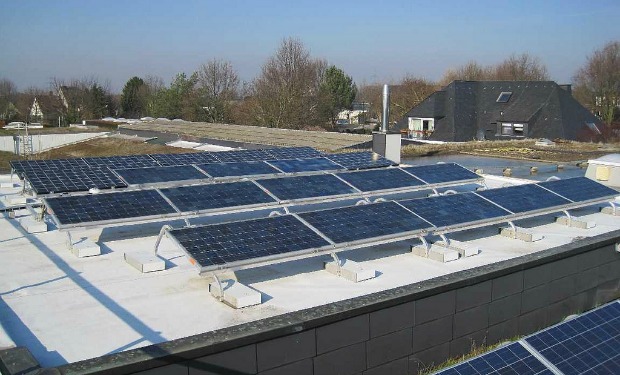 The company currently seeks another few million dollars in order to refine R&D and to ramp up marketing and sales.

Bottoms up for more efficiency

Most PV panels use the semi-conductive materials silicon, phosphorus and boron. Encased in non-reflective glass panels, one of the cell’s plates is made from silicon and phosphorus, while the other side is made from silicon and boron. Sandwiched together, the plates are joined with conductive wires and metal contacts to help channel the power collected to where it needs to go.

These typical solar panels have a bottom lining of aluminum. “You can find this in 95% of all the cells produced today,” says Kofman. “This aluminum is a thick five- to 10-micron layer through which light cannot pass. In our case we replace that with a thin layer of boron, which is transparent and acts as a conductor.

“The idea is that with an aluminum layer you can increase the front efficiency by creating an electrical field that pushes electrons to the junctions of the cell. There are less parasitic effects of the current from the backside, and the front side efficiency is increased. With the boron layer, this does the same job, and does it even better,” Kofman explains.

“But implementing the boron layer is very difficult. If you don’t do it properly, you can damage the silicon itself.”

bSolar is currently producing bifacial solar panels for companies and individuals willing to pay a little more to get faster return on investment, and increased efficiency from their solar panel installations. Kofman is mum on the ROI and pricing, saying that the market fluctuates too much to give an accurate number.