Noa Hilzenrat used to doodle “boring, boring, boring,” in her notebook during class in high school. She wanted to drop out and fell into a deep depression.

Then she figured out how to help herself and wrote a book describing how she did it. The Lessons You Won’t Learn in School, published in April, has sold more than 5,000 copies in Israel.

This young author, now 24, who “hated school and felt like I was in jail,” has even written a year-long lesson plan. Used by teachers in some Israeli high schools, the plan focuses on real-life lessons such as “how to manage your time, how to manage your money, and even how to be happy.”

Hilzenrat is already making her mark as a social entrepreneur, researcher and spokesperson for Generation Z.

Before this school year started, ISRAEL21c had a chance to talk to her about her ideas, beginning with her difficult experiences as a student.

“I was so bored in my classes that I couldn’t sit still,” she said. “Many students have this problem. We got used to everything going so fast and we have such a short attention span and they expect us to sit and listen for eight hours a day.”

All she did was doodle. During the TEDx talk she gave in May for Amdocs Innovation Week at Beit Berl College, she showed the audience the doodles that other students sent her when she asked them what they were doing in high school. She also shared her own.

She described how she became so depressed that she didn’t want to go to school. Her principal met with Hilzenrat and her parents and told her, “You’re gifted. School is so easy for you. What do you have to complain about?”

Her parents told her not to quit school and she promised them she would complete 12th grade, but she was left on her own to explore how to learn the things she felt school wasn’t teaching her.

“I couldn’t find anyone to understand what I was going through,” she said.

‘The kind of person I wanted to be’

Hilzenrat finally Googled “how to be happy” and found a sentence that turned her life around:

“How would the person I would like to be do the things I’m about to do?”

The problem was that although she knew “the causes of the French Revolution and how to solve math equations, I didn’t know what kind of person I wanted to be.” 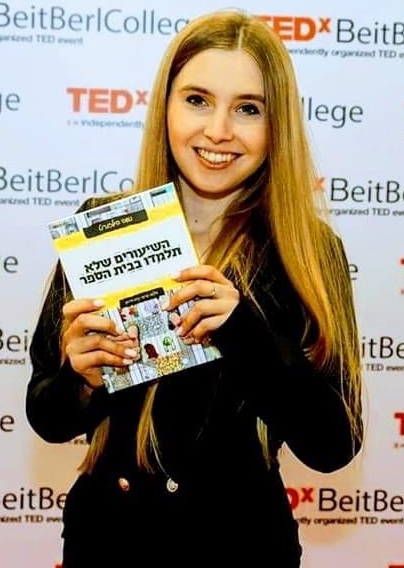 Noa Hilzenrat with her book, The Lessons You Won’t Learn in School. Photo courtesy of Noa Hilzenrat

She found four important questions to ask herself: “How do I want to make people around me feel? What makes me feel happy? What do I want to experience in my life? If I had the power to change one thing in the world, what would it be?”

“The education system,” she said in answer to the fourth question. “Then I stopped doodling and got busy.”

In her book, she tells students, “First, do things and then you’ll know what you want to do. The doing will lead you to find out. You can’t find out what you want to do if all you’re doing is scrolling down TikTok. If you don’t do things, you won’t know.”

She advises them to go to lectures and events, to read books, to watch shows from which they can learn something.”

Following her own advice got her far.

She started a student council in her school. Soon she served on the regional council and then at a national level. At a conference for student council members around Israel, she met a Druze friend. The two started a WhatsApp group and held a picnic for their friends “to get to know one another.”

After graduating high school in 2017, Hilzenrat spent time on her own “researching and learning about things that I felt I really needed to know in order to succeed in life: people and human nature, money and career, happiness, personal development, time management, decision-making and more.”

Her social networking skills led her to social entrepreneurship. After finishing her service in the IDF Spokesperson Unit, she worked as a Monday.com community manager of 20,000 people.

Hilzenrat’s book looks like something she would have wanted to have when she was in high school. It’s like a welcoming and encouraging workbook for life, with practical tips and room for students to write in the answers to the questions she poses. It even suggests homework assignments. A collage of doodles that students shared with Hilzenrat. Her doodle, “boring, boring, boring” is on the bottom, second from left. Photo courtesy of Noa Hilzenrat

There’s a chapter about what to do during class instead of wasting time.” She urges students to bring “content they find interesting and learn that.”

“Find one goal that you want to do,” she said. “Something you really want, and then find the right strategy to do it. Find the right mentor.”

She writes in a friendly, empathetic way, saying, “As a student, I felt exactly like you. I felt that I was not learning anything that would really help me in life, and that I was capable of much more. This is exactly why I decided not to rely only on the school’s curriculum.”

The curriculum she wrote has themes for each month and there’s a printable class plan.

One month, for instance, is dedicated to “learning how to love yourself.”

Every week, Hilzenrat gets messages from students who read her book.

“One told me he started to write a book after he read mine, another started working on songs, a third student has muscular dystrophy and said he started to create special effects on Instagram,” Hilzenrat said. “My book is helping students make it to their goal.”

“How did you get your determination?” I asked. “What do your parents do?”

“My father works in a bank for like 100 years,” she said with a smile. “Maybe 30 years. And my mother had cancer and passed away two months ago.”

There was a pause in which I offered my condolences and we sat for another quiet moment. Then Hilzenrat continued, “I get a lot of support. I know many, many amazing people. The ecosystem in Israel is amazing. I really didn’t understand how important it is until now. People are so open, so generous.”

Hilzenrat is now starting a company (still in stealth mode) and translating Lessons You Won’t Learn in School into English, hoping to publish it abroad.

“You have to learn to play the cards you get in life,” she said. “We have different cards that God gave us. Each of us is born with different strengths. It doesn’t matter what cards you got; you can still do something with them.”